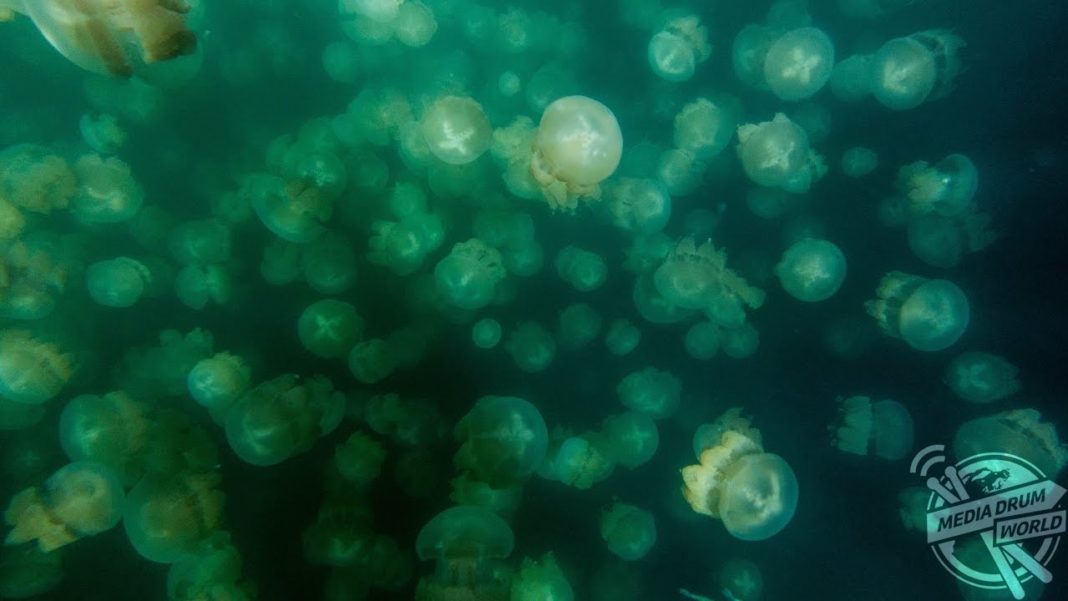 INCREDIBLE images and footage shows a man diving into a lake surrounded by hundreds of jellyfish.

The spectacular pictures show the large number of Golden Jellyfish, which thankfully for this intrepid diver do not sting, congregating in the lake as the diver tries to swim through them.

The stunning video shows the surreal nature of the lake as it is clear one moment and populated by hundreds of the creatures the next.

The pictures and video were taken at the aptly named Jellyfish Lake in Palau by American photographer and filmmaker Kien Lam (33) from San Francisco, California.

“In the images, I’ve swam into where the swarm is congregating,” he said.

“They follow the movement of the sun throughout the day and the lake is not too large. As you swim around, you’ll see a few jellyfish pop up, and then a few more.

“At this point you follow the direction where the numbers continue to increase. From here, I free dived down to about 25-40 feet. They are everywhere so you really don’t have to dive down that deep to be absolutely surrounded by them.

“However, the deeper you go, the less light there is around you and it becomes quite surreal. There’s a wonderful sense of weightless the further down you get and if you surrender yourself directionally, it’s hard to tell up from down and left from right.

“You are simply surrounded by the jellyfish and the darkness. It isn’t advised to go any deeper than that since there’s a layer of hydrogen sulphide that is poisonous at that depth. And in case you haven’t figured it out already, these golden jellyfish do not sting.”

Kien, who shot the pictures and video with an RX100 Mark IV and GoPro HERO+ 3 respectively, had wanted to visit Palau since hearing about the lake.

“I’m always looking for unique places and was surprised that Palau isn’t as heavily visited as it deserves to be,” he said.

“The set of rock islands have it all – spectacular diving, kayaking, snorkelling and of course the lake where millions of Jellyfish swim about.

“However, I prepared myself for the lake, the countless images I looked through or the stories I heard from travellers and locals, being down there was something altogether different than what I had imagined.”

These Makeup Effects Will Give You Nightmares: Clever Optical Illusions Through...