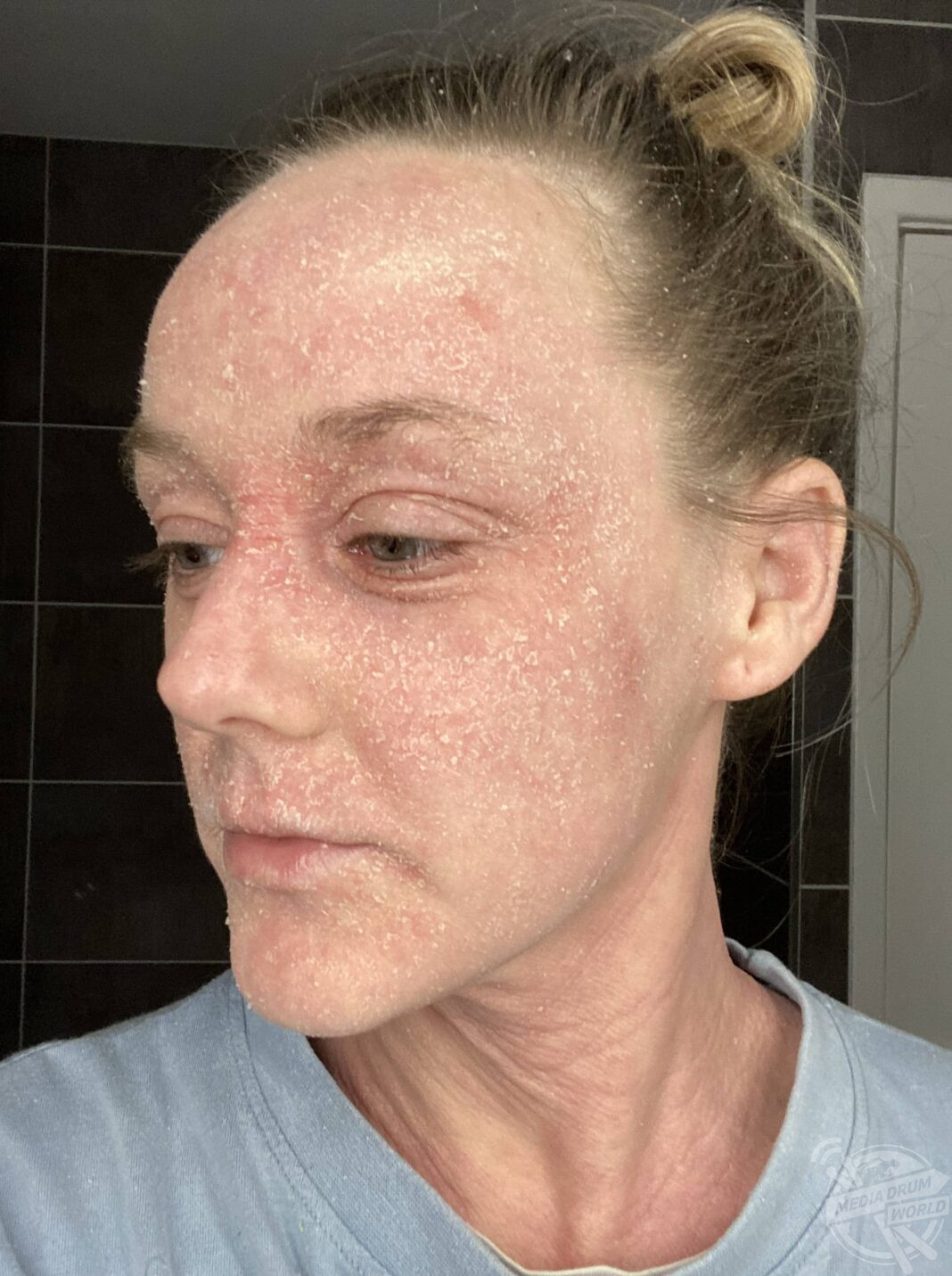 THIS MUM was left suicidal during Topical Steroid Withdrawal after she insists she was failed by the NHS yet cruel trolls brand her “irresponsible” for becoming a mother while enduring her condition.

Bethany Norman (33), a full-time mum from Surrey, UK, has suffered from eczema since she was four years old and was eventually prescribed hydrocortisone cream to treat her skin.

While battling Topical Steroid Withdrawal, which left her with excruciating rashes that radiated heat, she was blessed with a pregnancy and gave birth to her son Albie (now 15 months) in 2021.

She had stopped using steroids completely on the 19th of July 2020 after accepting that she was showing signs of steroid addiction, and in October she had to present herself at the hospital because her skin had gotten so bad.

Even then doctors refused to acknowledge that Bethany was experiencing Topical Steroid Withdrawal, with a dermatologist suggesting that she go back onto steroids to treat what they labelled as “just eczema”.

Bethany was also offered more immunosuppressants, which she refused due to the COVID-19 pandemic.

She opted for light therapy but had to cease all treatment after finding out that she was pregnant.

Bethany’s mum now has to act as a carer for both Bethany and her son, Albie because Bethany struggles to take care of herself.

Bethany says she now lives in “survival mode” and on the 20th of November her skin got so bad that she felt suicidal and she had to attend her local hospital’s Accident and Emergency department.

She says that she was “refused treatment”, with doctors telling her that she needed to wait for a dermatology appointment. She also says that they made “no mention of suicidal thoughts” on her discharge letter.

Bethany was so distressed that she left the hospital “unable to speak” and in hysterics.

Bethany’s mental health rapidly deteriorated due to her condition and the way that it was handled.

“Being unable to rely on medical professionals whilst being gaslit by them leads to a desperation that I wouldn’t wish on anyone,” Bethany said.

“Those relationships with people you live with have a huge strain too because you’re a burden.

“You need a lot of constant help, a lot of understanding without an end date to all of your suffering. It’s unimaginable for everyone involved.

“I don’t feel like I’ve been living the last nearly three years yet I’ve had a baby in that time.

“My mum recently has been my carer for the past two months during one of my worst flared as I can barely look after myself let alone a 15 month old too.

“I have been to Accident and Emergency with suicidal thoughts and urging them to at least give me a drip for my skin.

“After a seven-hour wait, I was refused any treatment and told its best to await my dermatology appointment.

Since this traumatic time Bethany has also been the subject of cruel trolling after posting about her plight online.

“I was recently told I was irresponsible and selfish for having a baby during TSW,” she said.

“The woman told me I am just looking for sympathy and have been selfish by not wanting to wait to have a baby.

“She told my friend, ‘she constantly says how she can barely look after herself yet thought it was a good idea to have a baby? Bizarre behaviour.’

“I was outraged and upset someone would take the time to project onto someone who had openly spoken about their struggles of even feeling recently suicidal.”

When Bethany first developed eczema at the age of four it was managed by her parents with moisturiser, bath oils, and steroid creams.

At different stages, doctors prescribed her stronger steroids to manage her symptoms.

Bethany recalls struggling after PE lessons with blood pouring down from the backs of her knees due to allergies and the heat.

When Bethany was 25, she visited a dermatologist because her eczema had become a “lingering nuisance”.

The dermatologist prescribed her a week of oral steroids, a steroid cream, and an immunosuppressant ointment.

Her skin gradually improved over a few weeks, so much that Bethany sent her dermatologist a card to say thank you, but by the summer of 2019 when she was 29 her symptoms were worse than ever.

Bethany had heard of topical steroid withdrawal (TSW), a condition that occurs when steroids are stopped after prolonged use, but still hoped that more steroid medication prescribed by the doctor would ease her suffering.

“During early childhood, I remember my skin restricting me to an extent but I got on with it,” Bethany said.

“The first dermatology referral that I recall was in my early 20s as my GP wondered why my childhood eczema hadn’t gone.

“The dermatologist prescribed me a week of oral steroids, betnovate steroid cream and protopic. I used protopic for around 6 months, which is an immunosuppressant ointment.

“My skin was particularly good for a couple of years, and I even sent the dermatologist a card to thank her.

“I went through a lot of stress in my personal life in 2019 and around that time my skin gradually got worse.

“I couldn’t have any labels in my clothes touch my skin, it became extra, ultra-sensitive.

“In spring 2020 I was prescribed one of the highest potencies of steroid cream, dermovate.

“By this point, I’d researched a lot and found TSW online having previously never once heard of it. Hoping that all my matching symptoms weren’t in fact TSW, I relied on the doctor and this steroid cream to solve the flare like I’d done many times before.

“Within a couple of days it was back with a vengeance and that’s when I accepted that I definitely showed signs of steroid addiction.

Despite the horrific bullying she has had to endure, Bethany is grateful for her support system and the community that she had built.

“My family and friends have been incredibly supportive from afar, no doubt of TSW existing and supporting me in trusting the process.

“My mum has been my absolute rock physically and mentally, especially over the last six months.

“I’ve gently encouraged a few people in the TSW community to publicly share their story on their own Instagram.

“The main reason I encourage doing so is the community feel, the connections and the support you receive. It had additional perks of spreading awareness, educating others and advocating too!

This Girl Was Once Called ‘Chubby’, But Her Love For Arnold...