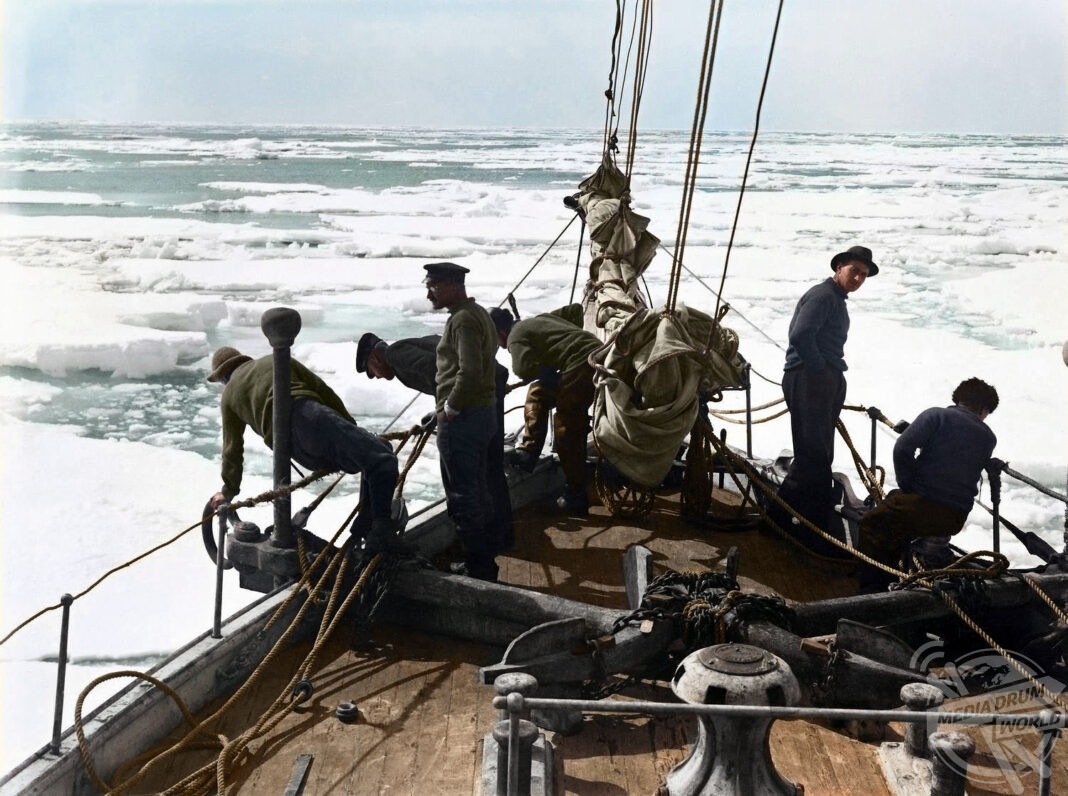 NEWLY COLOURISED images of one of Britain’s most celebrated expeditions show hero Shackleton in a new light when on January 21st 1916 a blizzard blew their camp across the Antarctic Circle.

The Imperial Trans-Arctic Expedition was conceived and headed by Sir Ernest Shackleton, attempting to make the first land crossing of the Antarctic continent. Despite his failure to achieve this goal, his feat was widely recognised as an incredible achievement.

The expedition left Plymouth on the 8th of August 1914, heading first for Buenos Aires, before sailing for the South Atlantic.

One photo shows Thomas Crean, an Irish seaman who was awarded the Albert Medal for Livesaving. Having also taken part in Captain Robert Scott’s 1911 Terra Nova Expedition, Crean signed up to join Shackleton in this new race. He was the second officer on the expedition. The picture shows Crean smoking a pipe and posing for the camera.

Another photo shows the crew walking on the ice with their ship, the Endurance in the background. On December 14th 1914, the Endurance became trapped in pack ice for 24 hours. Over the next few weeks, the progress of the ship was slow as it was continually halted and trapped within the freezing ice.

On September 30th 1915, Shackleton described the Endurance suffered “the worst squeeze we had experienced”. Succumbing to the pressure, the Endurance was destroyed on the 27th of October. The remains eventually sank on November 21st 1915.

Unfortunately, due to the harsh circumstances and the loss of the Endurance, the dogs were tragically lost. Shackleton wrote in his diary “we felt their loss keenly”.

The crew returned to civilization on 29th of May 1917. Despite their failure to achieve the crossing, the expedition and the crew became renowned for their endurance and will power throughout the voyage.

The wreck of the Endurance was rediscovered on March 5th 2022 , having been left untouched for 107 years. Discovered in the Weddell Sea, at a depth of 2,008 meters, the ships name was still clearly visible on the stern.

History student Ross Day (25), colourised these incredible images, giving a new life to Shackleton and his crew. He came across the expedition when researching the history of polar explorations

“It was the story of ultimate survival that against all odds everyone made it home alive despite being stranded in Antarctica with no communication with the outside world,” said Ross.

“To see it in colour would give such a deeper understanding to those trials and tribulations that the men went through.

“After Roald Amundsen’s South Pole expedition in 1911, this crossing remained, in Shackleton’s words, the “one great main object of Antarctic journeyings”.”

“With the Endurance trapped in the ice, some of the men in their downtime came particularly close with the dogs who loved the snow and ice and would often become play companions,” said Ross.

“Shackleton took 69 dogs with him, of mongrel breed, and mostly mixed with wolf.”

“After months spent in makeshift camps as the ice continued its northwards drift, the party took to the lifeboats to reach the inhospitable, uninhabited Elephant Island,” said Ross.

“Shackleton and five others then made an 800-mile open-boat journey in the James Caird to reach South Georgia.

“From there, Shackleton was eventually able to mount a rescue of the men waiting on Elephant Island and bring them home without loss of life.”