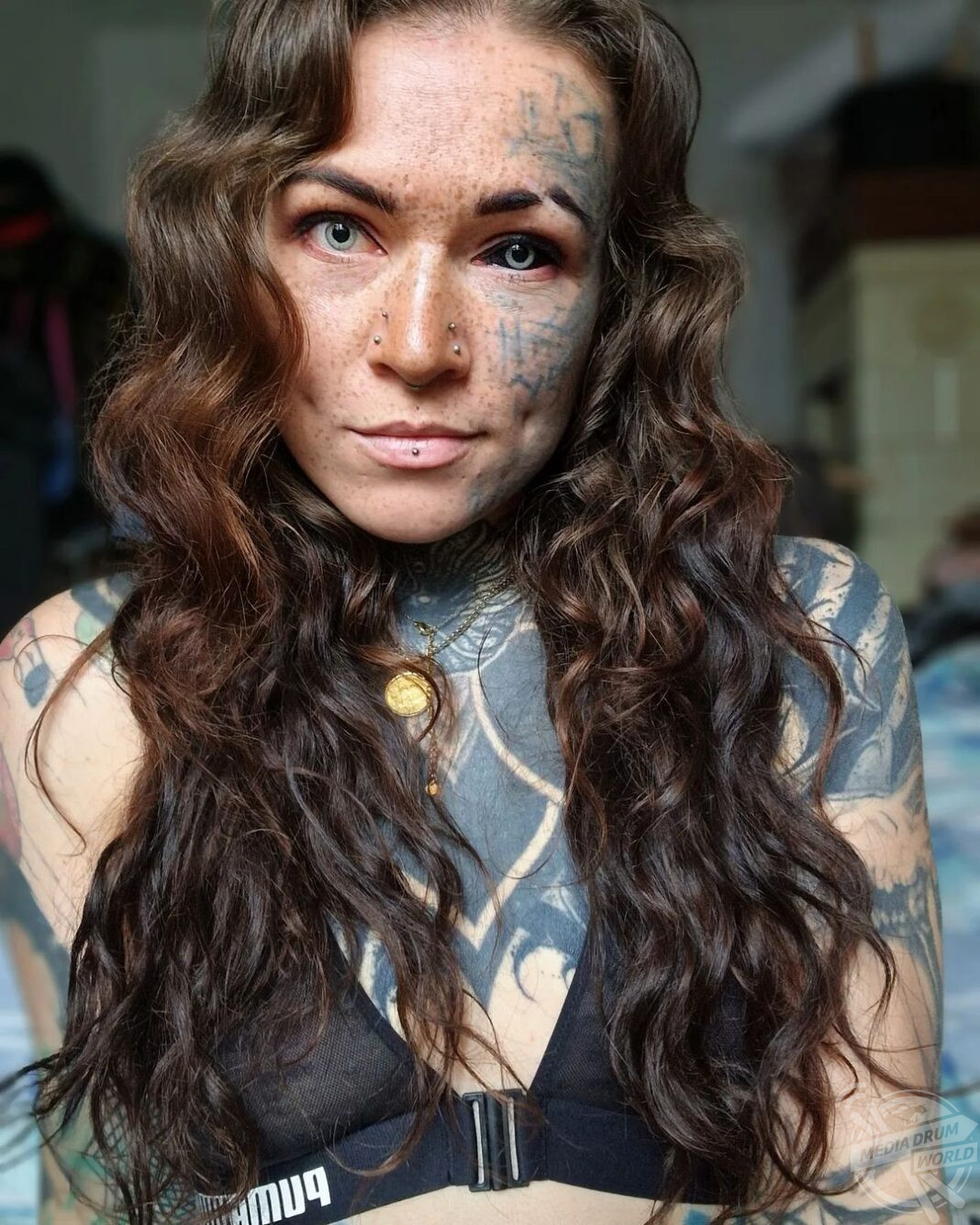 THIS GIRL has proudly covered most of her body in £10K of tattoos and has revealed the extraordinary before-and-after transformation from geek-girl to alternative-chic girl despite facing online trolls who say “this is what mental illness looks like.”

Tattoo artist  and Influencer Maria Spallek (32) from Berlin, Germany has always wanted tattoos, she has been fascinated with the art since she was 13 and loved seeing her big sisters tattoos to the level where she now has tattoos on her face including an inked right eye-ball.

In 2003 on a trip with her family they stopped as Maria got car sick and a group of ravers pulled up next to them. For about a minute Maria watched as they moshed to Satisfaction by Benny Benassi and was mesmerised by their tattoos and style.

Ever since that day she has drawn tattoos on herself and knew it was all she wanted when she grew up, that same year she got her first piercing and at 18 her first tattoo, lettering under her belly button and she has never looked back.

The transformation has cost Maria £10,000 but she has no regrets and does get many of her tattoos for free from friends in the industry.

Maria loves her ink and gets a lot of positive responses but if she were to pick her most polarising tattoo it would be her eye and face. Her mother even questioned if she did something wrong in Marias childhood to make her tattoo her face.

Maria started her transformation very young and it has helped her to grow in confidence.

“I got my first piercing at the age of 13, I had my bellybutton pierced and my fist tattoo for my 18th birthday, I got lettering on my stomach,” she said.

“My collection has grown a lot since then, I don’t have an exact number but I would say I’ve spent about £10,000. But I also got a lot of tattoos for free.

“My transformation has not changed how I feel about myself. It’s more the way I changed my mind.

“I just learned the term “extrovert antisocial” and that is how I feel. I love to stand in front of a big crowd but I have problems talking one on one.

“I was always like that and I think that my modifications just supported that behaviour. They make me stand out in the crowd but some people are off put so won’t approach me one-on-one.

“A few years ago I had a burnout and I started therapy. Since then I think everyone should get therapy. Now I’m so much better at talking to small groups and single people.

“In real life nearly everyone is kind and says nice things. I feel like they treat me better than others.

“But on the internet, there are some rude people. I read comments like “daddy issues’ ‘, “That is how mental illness looks like”, “why?” … but I don’t care.

“I have been collecting tattoos for 14 years but I have been modifying myself since I was 11 even just with dying my hair or getting piercings, it really has been all my life.”

Despite how full her body is Maria is not slowing down in getting tattoos, her most recent was a sphynx cat on her left leg just last month. She loves her artwork and has received an overwhelming positive response, except for one of her tattoos.

“I was part of a German documentary about beauty standards and I got a message from a cute blond girl. She told me that I gave her the courage to do something that she wanted for so long. Then she sent me a picture of how she colored her nearly white hair red. That was an awesome feeling,” said Maria.

“Also someone got my portrait tattooed by one of the best artists. What an unbelievable compliment.

“I would say the most prominent mod is my eye. But as always there are different opinions about it.

“My family treats me the same as before. I’m still their child, sister, grandchild, aunt. Only my mum had some doubts about the eye and face tattoo.

“She thought she did something wrong in my childhood. But she loves me as always.

If you are looking to start a modification journey Maria has this advice.

“Take your time to find the right artist. Don’t ask your family and friends about their opinion. Don’t search for something to get tattooed. You will find it by accident,” she said.

“If you have any health issues, visit your doctor first. Make sure that you are not allergic to the material.”

This Woman Began Binge-Eating After Her Dad Fat Shamed Her And...