This spine-chilling footage shows one of the world’s most formidable predators in action.

In this video, 12 foot long Brutus the Great White Shark demonstrates how he got his name and can be seen giving onlookers a dramatic show as he hunts for prey.

Weighing 1,500 pounds, Brutus can be seen stealthily gliding through the water as he lunges towards some bait, revealing his magnificent yet terrifying jaws.

Still images show close-ups of Brutus, his face beaten up following an earlier brawl with what likely became his prey.

Euan Rannachan (@euanart) is the photographer who captured these spectacular scenes when he was diving in Guadalupe Island, Mexico.

“This shark’s name is Brutus and as you can see he lives up to his name,” he said.

“At the time he had those fresh gashes on his face from what looked like dinner the night before. 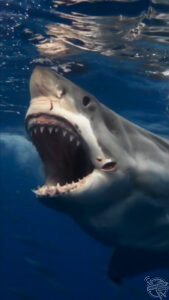 “He had actually not seemed too interested in our bait lines and had made a couple of passes to investigate.

“It was not until a seal from the shore showed up and started spinning circles around him.

“You could tell he became annoyed and decided to go for the bait soon after.

Seals are a favourite meal for hungry Great Whites but they also choose to feast on sea lions, dolphins and other sharks.

“The sharks come to that Island for what I call ‘shark burritos’ – seals,” he said.

“The deep shore falloff makes for a great place for a white shark to do their vertical attacks.”

Having his own company taking visitors to Guadalupe to see sharks, Euan is no stranger to working underwater, yet he still has a lot to contend with.

Changing a battery or memory card is no longer a simple action and sometimes temperatures mean that a shoot has to be cut short.

“I own a company (www.beashark.team) that takes people out to the island to get a better idea of just how these animals really are,” he said.

“In doing this people see the real version, not what we are shown in Hollywood.

“The sharks are curious about what us humans are doing in a metal box floating in the water.

“But as soon as they see we are not food they could care less if we were there or not.”

What Started Off As Being ‘Clumsy’ Led To A Diagnosis At...