MEET THE man who had chunks of FLESH removed from his head to spell out ‘666’ and has spent over seven-thousand-pounds covering sixty-five per cent of his body in tattoos.

Singer and tattoo artist Renato De Santa (40) from São Paulo, Brazil, has always loved tattoos and body modifications and got his first inking of a tribal design on his left arm when he was 18. Renato also got his eyebrow and ears pierced before becoming an apprentice at a tattoo studio when he was 25.

In 2000, Renato opened his own studio and since then, his own personal tattoo and body modification collection has grown. Renato has lots of piercings and although he has lost count of the number of tattoos he has, he reckons that 65 per cent of his body is covered in ink.

Renato estimates that he has spent £7,053 ($10,000) on all of his body modifications which include having silicone implants in his forehead, tattooing his eyeballs black, having a split tongue procedure to make his tongue look like snake’s, and having a painful scarification procedure of the numbers ‘666’ etched into the skin on the side of his head – which is Renato’s way of protesting against the church.

Renato surrounds himself with likeminded people so rarely receives any criticism about his extreme look but he does sometimes receive offensive messages online which tell him he is going to hell and is promoting hate speech. Renato ignores the comments he receives and says his look doesn’t affect his love life in any way. 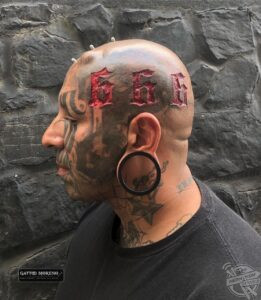 Renato loves looking ‘like a demon’ and plans to have his ears cut into puzzle pieces, further subdermal implants on his eyebrows, cheek bones and genitals as well as getting piercings on his private parts.

“I got my first tattoo when I turned eighteen,” said Renato.

“My first tattoo was a tribal design on my left arm. My first piercing was on the eyebrow and I also had small earrings.

“In 2000, I set up my first studio in my house and little by little, more clients appeared and I expanded the business. 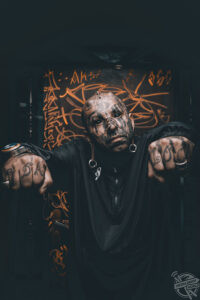 “Today I have no idea of how many tattoos I have. I believe I have sixty-five per cent of my body tattooed.

“Nowadays, there is still prejudice – sometimes I get offensive messages on the internet but that doesn’t worry me.

“On the internet people who send me messages are usually Christians saying that I’m going to hell and promoting hate speech, it doesn’t bother me anymore.

“My tattoos don’t interfere negatively in my love life or when I’m out and about because I always try to be surrounded by people who like or are adept at this type of culture.

“The most painful modification I’ve had is between the cut tongue and the scarification on my head with the symbol six-six-six.

“The six-six-six is a protest against the church and the system that obliges everyone to convert to Christianity in some way. 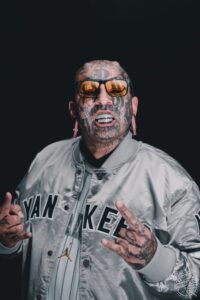 “Nowadays, in my country, you have to say that you believe in God. If not, people do not look at you kindly but they prefer to live in a totally hypocritical world with its dogmas and doctrines created by man.

“My intention is to free minds and show that we can be who we want, respecting space of our fellow men and living in harmony with the universe.”

Renato shares pictures of his incredible tattoos on his Instagram under the handle, @desanta_official.

“The message I want to pass on is to externalise the art I see inside myself and I feel good looking like a demon like the haters say.

“The world is for everyone who lives here regardless of beliefs, colour, race and sex and that nothing and nobody is excluded from a supposed plan or society.

“Everyone’s opinions are important for the world where we live because we are all connected in a certain way by the same carnal material.”

Swimming With Dinosaurs: The Brave Photographer Who Gets Up Close And...