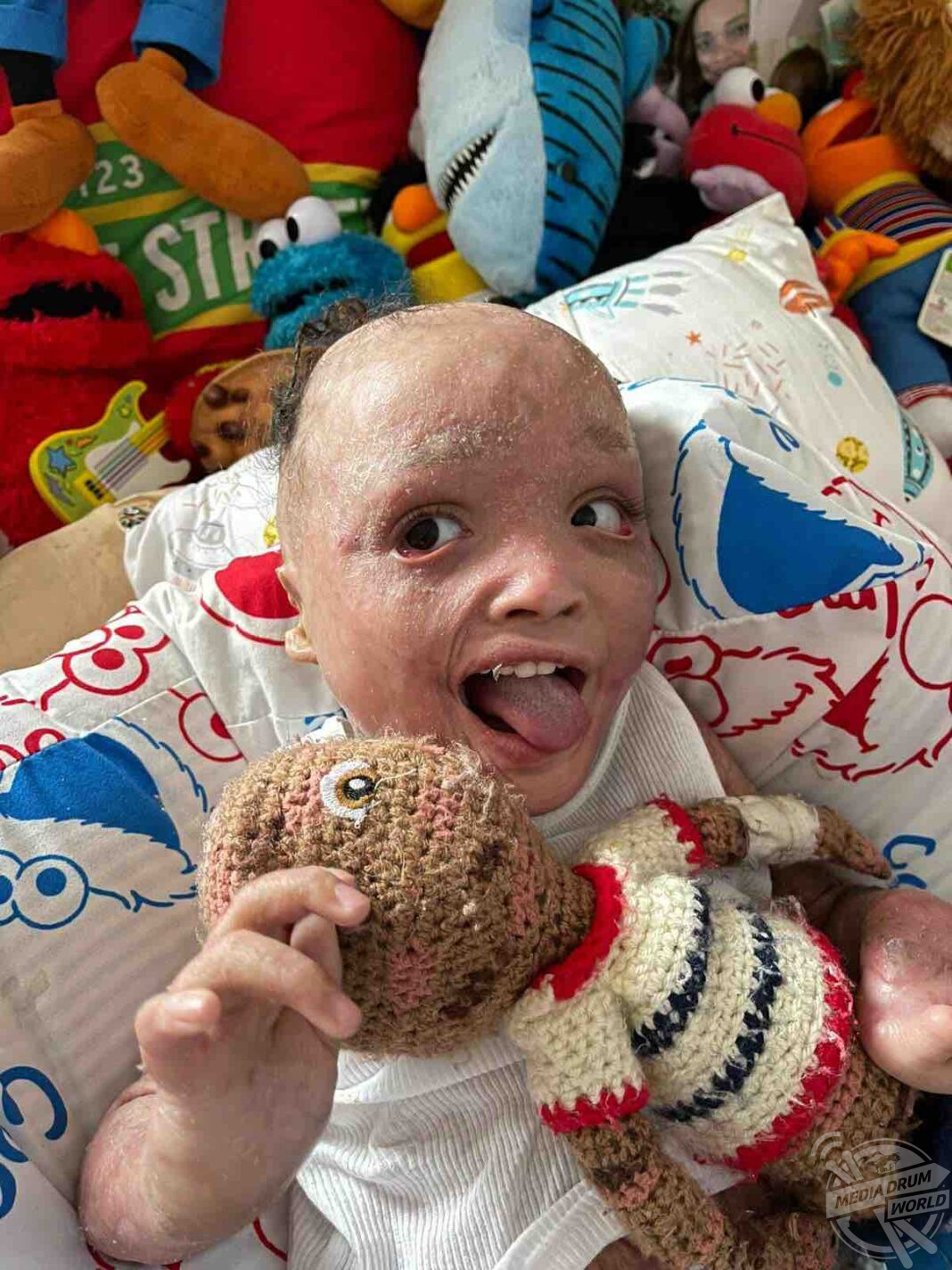 THIS BRAVE little boy survived burns to NINETY-FIVE-PER CENT of his body after a disgruntled lodger allegedly set fire to his family home – killing his mother and sister.

Programme manager Denise Moreno (45) from Queens, New York, USA, was the aunt to Ema (6) and Liam (2). Ema and Liam, along with their mother Elizabeth, were sadly involved in a house fire on July

Denise remembers her nephew being a beautiful little boy with lots of character and sass, who loved playing with his older sister and being around his family – especially his mother – but this all changed instantly.

The tragic fire is believed to have been started by an arsonist, who came to New York City in search of a job and stayed at the Moreno’s family home whilst he found his feet.

Due to the family noticing that he was not mentally stable, they asked him to leave where he became aggressive and subsequently set the family’s home on fire in revenge.  He later died in the fire and the family tried to escape the property for five minutes before the emergency services arrived.

As they arrived, Elizabeth and Liam were found by the front door trying to escape, where one firefighter had to administer CPR on Liam which saved his life. He was rushed to hospital by an ambulance along with his mother.

Denise recalls leaving work in a hurry and arrived at the house, where she was in disbelief. Liam’s condition was extremely critical, as 95 per cent of his body was burned.

As they arrived at the hospital, Denise was told that Liam had less than a one per cent chance of survival and if he were to survive, he would need constant around-the-clock care for the rest of his life.

Liam’s body was extremely swollen and he was unable to open his eyes and mouth. He was covered in medical equipment and had to have his stomach opened up in order to relieve pressure.

He also had to go through extracorporeal membrane oxygenation (ECMO) – where a machine is hooked up to the patient and used to replace the function of the heart and lungs – as his body was failing.

On July 24, 2019, doctors informed Denise that for Liam to survive, he would have to have his right foot, fingers and toes amputated as there was no more blood flow to his limbs which was needed to prevent any further infection.

After over a year in hospital, Liam was finally allowed home in November 2020 where he entered the full-time care of Denise’s sister-in-law, Rafelina Moreno (50). Although they’re thankful that he’s finally home, the amount of care and attention he needs has been overwhelming.

Since then, he has returned to hospital to have 35 further surgeries which included multiple skin grafts, neck realignment and surgery on his intestines.

As well as this, he receives up to five home therapies per day, five days a week, which includes speech therapy, swallow aid and individual assessments as well as general check ups from the doctors a few times a month.

Denise worries that in the future, Liam will get bullied for the way he looks and moves around, especially as he will need some assistance due to this tragic ordeal.

Despite the long road to recovery ahead, Liam shows perseverance every day and reminds his family that each day is a gift that shouldn’t be taken for granted.

“I remember my nephew Liam, as a beautiful little boy who was full of character and sass. He used to love playing with his older sister, Ema and loved being around his family, especially his mother, Elizabeth,” said Denise.

“However in July 2019, this all changed when a fire broke out in their home which is believed to have been caused by an arsonist.

“Liam, his sister, mother and grandfather, Claudino, were all in the property at the time whilst everyone else was at work.

“I was packing up my stuff at work when I received a notification through an app on my phone that alerted me of a mass fire in my neighbourhood. As I clicked on the link, my heart sank as I realised it was my family’s home.

“I was in total disbelief and I rushed out of work to make my way to the house, where my phone kept ringing each time there was a further note of severity.

“As I arrived, I fell to my knees in complete shock and fear at the site of the house, which was crumbling apart.

“From what I was told, Elizabeth tried to escape with Liam first, as she was found by the front door holding onto him and it was believed that Claudino had a physical fight with the arsonist whilst trying to save his family.

“The neighbour from the first floor initially called 911 after an explosion was heard and after five minutes, firefighters appeared where they pulled out Liam first and performed CPR on him, which saved his life.

“Liam was wrapped up and rushed to the hospital in an ambulance as he was in an extremely critical condition. Over ninety-five-per cent of his little body was burned and he was given less than a one-percent chance of survival.

“As I arrived at the hospital, I noticed that his whole body was extremely swollen where his eyes and mouth were completely stuck shut. Shortly after, he was completely bandaged up to help with the pressure of the burns and was placed on medical equipment to help him breathe.

“Medics then informed me that his intestines were starting to swell and in order to save his life, they had to open up his stomach so that they could relieve the pressure.

“Although our whole family was in complete fear over the condition of Liam, the doctors made us feel reassured each step of the way that they were doing everything they could to help his severe state.

“Despite this, it was very easy to lose hope and we held onto our faith even harder, praying for not just Liam, but for Elizabeth too.”

On August 6, 2020, the family were sadly informed of the passing of Elizabeth, as her condition never stabilised. Although Denise was absolutely heartbroken, she had to turn her attention to Liam, who was still in a critical state and had no immediate family left by his side.

“As we heard about the passing of Liam’s mother, we knew we had to step in as a family, where my sister-in-law became his legal guardian,” Denise said.

“We knew from the beginning that amputations were likely, but we were informed just a few weeks after the tragic accident that an amputation of Liam’s right foot, fingers and toes were necessary as the blood flow to his limbs had started to cut off.

“Over the course of a year, Liam also went through an ECMO where a patient is placed onto a machine to replace the function of the lungs and heart, which was the scariest procedure by far as not many patients survive this procedure.

“Alongside this, he has had a further thirty-five surgeries to date which has included multiple skin grafts, neck realignment and surgery on his intestines to help with the swelling.

“The whole time whilst Liam was in hospital was devastating, as although we knew he was getting the care he needed, each surgery took around six hours to complete and after each one, there would be a long and laborious recovery period.

“However in November 2020, Liam was finally allowed home right before Thanksgiving, which we are all so grateful for.

“Despite this, the amount of care and attention he has needed has been overwhelming and none of us could have ever imagined the painful recovery of a burn survivor – especially one so young.

“Now, Liam has to visit the doctors a few times a month for various check-ups which monitor any intestinal concerns, as well as his hearing and swallowing development.

“From Monday to Friday, he receives up to five at home therapies a day for his speech, swallowing and movement, which has helped him a great deal since leaving hospital.

“Although we’re so proud of his progress, I do have concerns for the future with bullies who may treat him differently for the way he looks and moves around, as well as the fact that he will need around-the-clock assistance.

“So far though, the general public have been great whenever they see Liam and are always amazed by his willingness to fight. Anyone who meets him instantly falls in love with his laughter and we are thankful that there has been no negativity surrounding Liam and his situation.

“It has been hard as a family seeing our little baby suffer – not just physically, but emotionally too with the loss of his mother and sister – but we do our best to play with him all the time and spoil him as much as we can with massages and gifts.

“Liam takes everything day by day and he is starting to get used to seeing the therapists, which has been a great breakthrough as it makes my job as a carer slightly easier.

“We have learned through Liam and his fight that you can never give up and that each day is a gift that shouldn’t be taken for granted.”

Happiness Turned Horror For The Family Expecting Triplets, Only To Be...