Media Drum World
Home Travel This Trio Have The Perfect Mobile Home Made From Old An Old... 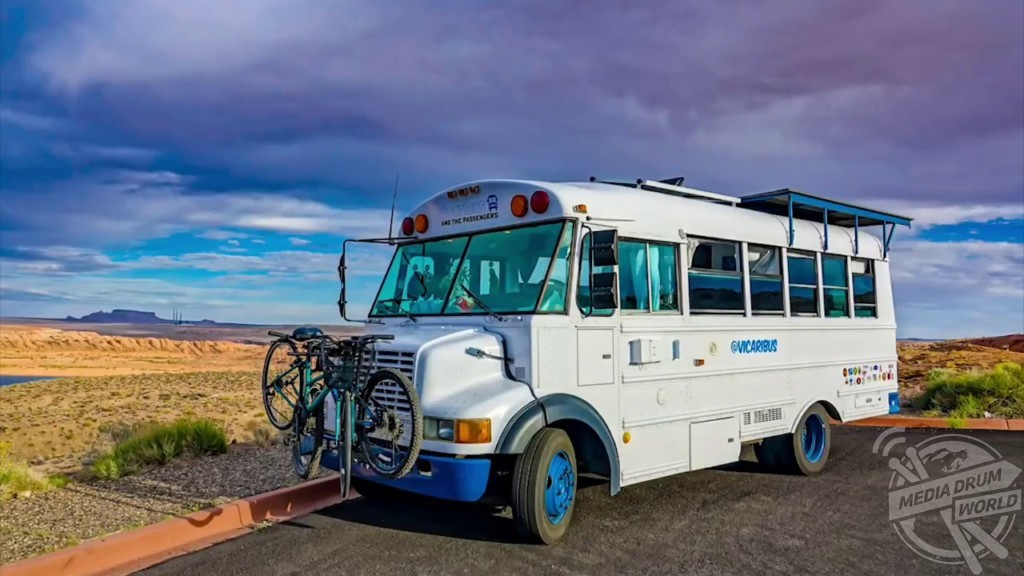 THIS COUPLE turned a former-school bus into a 120square-foot solar-powered mobile home for £30K to live in with their best pooch pal.

Freelance software engineer Nicholas Underwood (38), from Atlanta, Georgia and doctor of physical therapy Heather Yandziak (31), from Asburn, Virgina, wanted to travel the US and decided on a bus conversion so one-and-a-half-year-old Mini Goldendoodle Milo could tag along.

The adventurous pair wanted the ability to stay out in the wilderness for long periods of time so made their 1998 Thomas Vista 3600 School Bus fully solar powered.

It took them one year of working nights and weekends and a cost of around £30k to convert the bus into their cosy home.

“From the beginning we knew we wanted to have the ability to stay out in wilderness for long periods of time without having to always stay at campgrounds as we travelled,” said Nicholas.

“For one, it is much cheaper to do the free parking out in the wild as much as possible, called “boondocking”, and it’s also much more pleasurable and rewarding than sitting in a dumpy campground with dozens of other rigs crammed in beside you.

“In order to make it as easy as possible for our rig to run on solar, we had to make conscious decisions to make everything in it run on as little energy as possible including low energy LED lights and a DC chest fridge. For this reason, we also chose not to have any air conditioning as it just draws too much power and instead cool off with a fan mounted in the emergency exit hatch.

“We have two 165W solar panels mounted on our roof that connect to a 200Ah battery which meets our power needs. We do also have the ability to charge our power system through shore power or the alternator of the bus if sun is not abundant.”

The couple set off from Denver in April and have since been through New Mexico, Arizona, Utah and are currently in Idaho, having clocked up around 5,500 miles.

They hope to continue on to Washington, Oregon and California before heading back to the east coast for the holidays with their families. They had planned on a sailboat in the Caribbean before deciding on their bus home.

“I had lived on a sailboat in the Bahamas for a summer before we met and had been itching to do it again, but then we saw our first bus conversion on YouTube and immediately realized that’s what we needed to do,” said Nicholas.

“Life is much simpler living in the bus, but at the same time we seem busier than ever. Everything we own is this bus and what we could fit in it. We got rid of everything else before we hit the road.

“The small space hasn’t been an issue at all and we both think we could go even smaller if we had to. The beauty of it is now we live on our own schedule and get to see and do so many amazing things. The biggest challenge has been keeping up with our documentation of the trip on our blog and social media to keep true to our buses name, Vicaribus.

“We named it Vicaribus with the intention of sharing everything so that other people (mostly our mums) could experience the journey vicariously through us. We did, however, have no idea how much time it was going to take to keep up with all of the sharing. We are starting to get a bit of a following though, so it is starting to pay off.

“Milo is even a little smaller than most minis. We call him travel-sized. This breed is hypo-allergenic and does not shed and have amazing personalities. We couldn’t imagine not bringing him along. We pretty much got him at the same time we got the bus; in fact he was there with me during the much of the conversion process. He is an excellent hiker and has been the perfect companion on the journey.”

The couple add that the best part of their new lifestyle if the freedom and had a message for anyone inspired to follow their lead.

“If you think it’s something you might want to do, then do it,” said Nicholas.

“Don’t wait for a better time, just find a way to make it happen. It can be done on a shoe-string budget, or it can be very expensive – it just depends on how you want to do it, but in the end the freedom you get is something that so few people ever get to experience in this 9 to 5, material possessions-based culture.

“But, also be prepared for frequent frustrations and having very few things go exactly as planned. If you’re not adaptable or not good at rolling with the punches, this may not be the lifestyle for you. The trade-off to the freedom is you lose that predictability that comes with traditional modern lifestyle. For some people though, like us, that’s half the fun.”

Wondering How To Get A Dominica Citizenship? Here’s Some Useful Advice

How To Save Money On Everyday Things

Which Smoothies Are Ideal For Losing Weight: 6 Incredible Recipes

Need To Buy New Lights? Here Are Some Tips To Help You Out

Married Medics Working and Travelling America in Van to Pay Off...