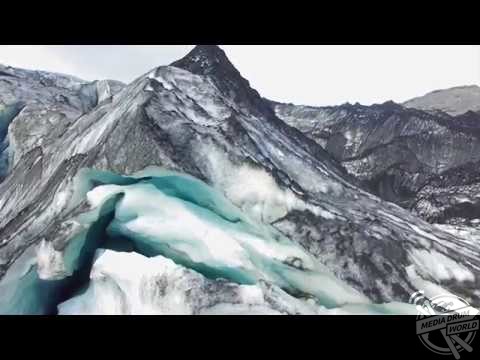 The series of stunning pictures show tourists climbing on the glossy formed ice, taking photographs and bravely standing underneath sharp looking icicles. Other shots show the frosty blue hues of the lakes that have formed inside the glaciers.

In stark contrast, stunning aerial footage shows the expanse of Iceland’s glaciers from the sky, showing the undulating mountain range with snow and ice forming.

The incredible shots were captured by Johann Helgason from Hafnarfjordur, Iceland. Johann used a Canon EOS 6D to take the beautiful pictures in Breidamerkurjokull which is an outlet glacier of Vatnajokull in southern Iceland.

“This location has a wow factor of ten out of ten, it is simply stunning,” said Johann.

“It is one of those things that makes you wonder if there is a higher power that had a hand in creating it.

“I’m not very religious so this is hard to do where I am concerned but it does happen from time to time and seeing the ice caves does that.

“They are what I would call a natural cathedral, stunning displays of light and colour. They are changing all the time.

“I love the peace and quiet that you feel when being there by yourself or with a select few and witnessing how awesome nature is and how terrifying it can be, sometimes all at the same time.

“Witnessing a glacial river flooding is mind-blowing in its power, the swirls of the current are hypnotic.”

The Vatnajokull glacier is the largest ice cap in Iceland, covering eight percent of the country and is one of the largest in Europe.

“The ice is in constant motion so there is a lot of sound created by the ice shifting and moving,” said Johann.

“We have to be more mindful of how we treat our planet, there is such immense beauty in nature, both in landscapes and wildlife.

“If we don’t start being more responsible, future generations will not think kindly of us and won’t be able to enjoy what many of us take for granted.”

4 Practical Tips For A Worry-Free Vacation

Four Tips to Make Your Family Vacation A Success

Woman Who Was Obsessed With Being Skinny Overcomes Body Dysmorphia