AMAZING images show a man clinging to the jaw of a tiger shark wrestling to free the three thousand pound beast from a rogue hook lodged in its mouth. 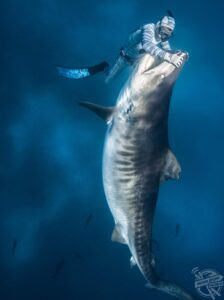 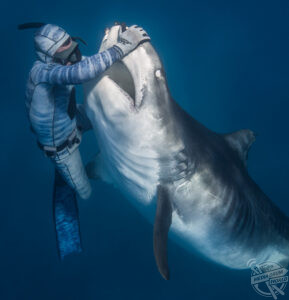 Pierrick is a shark safety diver and runs his company Moorea Moana, promoting safe dicing experiences and removing the stigma around sharks. He cares for the sharks where he can, removing objects lodged in their mouths such as hooks from fishers.

“I love to spend time with sharks, observing them, removing hooks and fishing lines if I can,” said Pierrick.

“My passion and personal goal is to continue to learn more and more about how to communicate with sharks and study their different behaviour in the water.

“I also try to educate people about the importance of sharks for our marine ecosystem during our tours and change their negative perception and fear of sharks by a better understanding of these animals.”

Tiger sharks are predominantly peaceful with attacks and fatalities being extremely rare.

For Pierrick, education is key, fear extending from out misunderstanding of the sharks as well as their negative portrayal in the media. 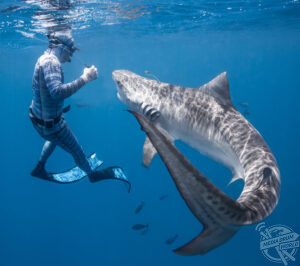 “A better understanding permits better protection of these precious animals essential for our ocean,” said Pierrick.

“I also have a foundation named Ma’o Mana Foundation, which participates in the protection of sharks in Polynesia by education, assisting scientists and the government on different studies, shark projects and encouraging ecotourism creation based on shark observation.