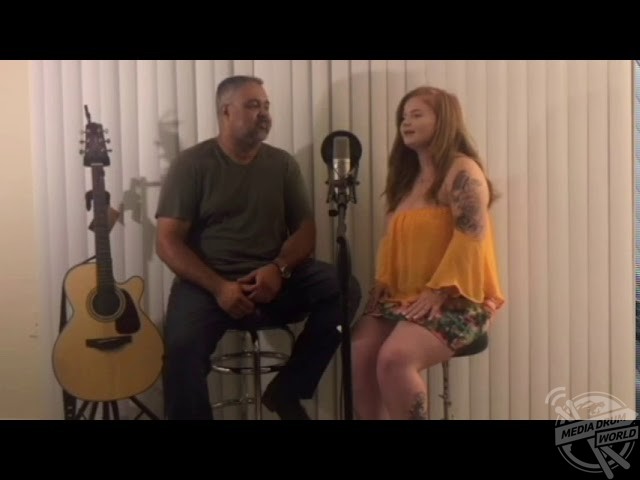 THIS COUPLE are mistaken for FATHER AND DAUGHTER thanks to their TWENTY-SEVEN-YEAR AGE GAP which is the same age as HIS twin daughters – but after moving in together after just TWO MONTHS they are proving that their love is real.

Nanny, Tori Barron (21) met truck driver, Eddie Smith (48) from Maryland, USA, at a karaoke bar in November 2017 where they were instantly attracted to each other. While she initially played it cool, a few weeks later, he asked her out and they went on their first date to the cinema.

After a few months of dating and falling for each other, Eddie declared his love for her which made her feel happy, but while she felt the same way she didn’t say it back until a month later as her previous abusive relationship made her cautious of the word.

They became official in January 2018 and just two months later they decided to move in together and have been together ever since.

While at the beginning of their relationship, negative comments from strangers bothered them, they have learned to ignore them. People still appear shocked when they see them together and find out they are in a relationship, as they mistake them for father and daughter, with Eddie’s twin daughters being 27 years old.

“We both enjoy hanging out with our friends and going out and singing, that is actually how we met. We were both out at a local karaoke bar, singing and hanging out with mutual friends,” Tori said.

“I was speaking to a friend of ours about a friend I was going to go hang out with. I was walking around the bar with my phone out trying to get into contact with the friend of mine.

“Eddie walked up to me after he overheard the conversation and said to me, ‘Why don’t you put the phone down and come hang out with me instead’, I laughed at him, and pretty much gave him the cold shoulder and a dirty look.

“The following week we ended up running into each other again, but we just exchanged short conversations within the group not between the two of us.

“At that time, it was me, Eddie, a male friend, and a few girlfriends of mine hanging out. I guess the male friend knew that Eddie was interested in me and didn’t like it because he was also into me, even though I wasn’t into the him at all.

“Whenever Eddie would get up my male friend would tell me that Eddie was only trying to get into my pants and nothing more than that.

“This male friend was jealous of the fact that Eddie and I were hitting it off, and I had no interest in the male friend whatsoever.

“He was trying to befriend Eddie, then bad mouth him to me. That same night we ended up going to another karaoke spot.

“Eddie went on to say, ‘Well if I’m your husband than you’ve got to play the part and give me a kiss.’ So, I hurried up and gave him a quick peck on the lips.

“It was finally his turn to sing, I looked at one of my girlfriends and I said, ‘Watch, this is how you make a man fall for you’. So, he started singing some country love song, and I went up to him and slow danced while he was singing and then we did some line dancing that night, and then went our separate ways.

“A few days later he asked me on a date to the movies, we got to the movies really early, so we grabbed something to eat and sat in the car and talked for a while.

“So, I got on his case about not making the first move. It seemed like he was bit shy or something who knows.

Tori and Eddie’s relationship quickly sped up and after just two months of being official, they moved in together and have been close ever since.

Strangers would constantly stare at them and ask them if they were father and daughter and one even asked if Eddie was Tori’s sugar daddy, but that hasn’t stopped them from being together.

“We had a crazy beginning for sure. When things calmed down and we started getting serious Eddie would always tell me He liked me a lot,” Tori said.

“I guess he didn’t want to throw the word ‘love’ out there too soon, until he knew that this was serious. One night he picked me up and he was driving. He told me that he needed to have a word with me.

“He had a bone to pick with me; he was telling me that I did something, and I had no idea what I did so I was really confused. But he kept saying, ‘you know what you’re doing’.

“I legitimately thought he was mad at me for something and I had no idea what it was. He then goes ‘I’m in love with you’ and my heart just sunk, I felt so much joy and happiness.

“At that point, I already knew I loved him but, I didn’t say it back. Not too long before we met I got out of an almost two-year abusive controlling relationship, so I was very touchy and sensitive with the ‘love’ word. About a month later I finally said it back to him.

“We moved in together only after being ‘officially together’ for two months. But it all worked out. We are still together a year and a half later.

“I mean, at first of course it was uncomfortable. That’s the problem with dating someone older and younger, you’re bound to get questions.

“Now, we just laugh at it and completely be smart about the whole situation. The only time that I can say really shocked me was we went to a breakfast spot regularly in the weekends, and the waitress was like, ‘is that your daughter’.

“Eddie’s response was, ‘does it look like I can make a red head’. She got offended by it and wouldn’t speak to us when we came in anymore.

“Then we came in another time, and he had asked her if what he said offended her, and she said it was kind of rude and he explained that he was just joking and apologised. Then she asked, ‘well what are you to each other’ and we said we were dating.

“He has two twin girls who are twenty-seven; they said that they were cool about it, as long as he was happy, and I treat him good it’s all good.

“People have asked us, ‘is she your daughter’ and ‘is that your dad’. Some guy said to him, ‘you should be proud of your daughter she’s got a great voice’.

“A bartender once asked us if he was my sugar daddy. I’ve had people tell me that dating someone old enough to be my father is disgusting.

“To anyone in an age gap relationship or curious about being with an older or younger person- go for it. You only have one life, don’t pass on an opportunity all e the age difference might scare you.

“This is the happiest I have ever been. Don’t miss out on what could be your happy ending. Don’t let anyone tell you who you can and can’t be with.

“To anyone who might criticise my relationship – I tell them to mind their own business. It’s my life. Not yours. We are no different to a same age couple, we are just a normal couple who love one another.”

Woman Branded A Barbie Fights Back By Becoming A Marine

It’s Not All About The Combat: Colourised Images Shed Light On...