Media Drum World
Home Past This Book Reveals The Life Of A Celebrity Photographer’s Experience Of The... 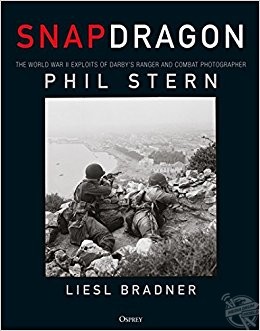 EXPLOSIVE war images, included in a new book, show the harder side to famed celebrity photographer Phil Stern during his time serving in WWII.

Candid shots show the troops engaging in personal moments playing sports in between the battles that persisted throughout their time serving.

Black and white images show a mixture of both horror and hope within the squad whilst the war persists.

A host of images show the camaraderie within the group that only Stern could acquire due to being seen a soldier first and photographer second by his peers. This afforded him the freedom to take photos others could not.

Spectacular moments in history are in abundance including an intimate moment between Kennedy and Sinatra.

The images form a new book called Snapdragon, published by Osprey Publishing. The book is based on Stern’s memoirs and brought to life by award-winning journalist and friend Liesl Bradner.

‘’Phil began writing his memoirs while recuperating from his wounds in Sicily in late 1943, continuing through the fall of 1944. Soon work and family became his priorities, taking up the majority of his time so the manuscript was put aside and never completed until now,’’ explainsed Bradner in the book’s introduction.

‘’While digging through his extensive archives in his quaint, cluttered Hollywood bungalow across the street from Paramount Studios, I unearthed his original, unfinished, tattered wartime manuscript, buried deep in the bottom of a box underneath a stash of old newspapers from the 1940s.

‘’When Phil passed away on December 13, 2014, I took up the reins in finishing his wartime memoir as per his wishes. In addition to countless interviews and intimate conversations with Phil and his family through the years, I also spoke with relatives of the 1st Battalion Rangers who knew Phil, acquaintances, co-workers and long-time friends he confided in.’’

Stern was well respected within his squad and had huge respect for the military. His first love was always photography so in his early days he spent his nights photographing dead bodies for the police gazette, earning himself three dollars an image. This was only until he was hired by the then millionaire publisher Dan Filmor as a studio photographer.

Once working in photography for a while he enlisted as a volunteer combat photographer with the Darby Rangers.

After getting injured in 1943 Stern returned home, at which point Hollywood came calling. He was later known for his striking photography of incredibly famous people of the time consisting of James Dean, Frank Sinatra, Marilyn Monroe and John F. Kennedy, all of whom granted him access to their inner sanctums.

‘’Phil’s time in the Army with the Rangers deeply influenced his photographic style and career for the rest of his life. It also put him in good stead with the alpha males of Hollywood: Bogart, Brando, Wayne and Sinatra. They saw him as a man’s man and put more trust in him than other photographers,’’ said Bradner.

‘’What distinguishes Phil’s memoir is that, unlike other war photographers on assignment with various news outlets, Stern was a bona fide member of an elite Army unit, allowing him unrestricted access to the front lines, training and behind the scenes of the daily life and shenanigans of the regular G.I.s.’’

Published by Osprey Publishing, Snapdragon can be purchased now for RRP £20: https://ospreypublishing.com/snapdragon