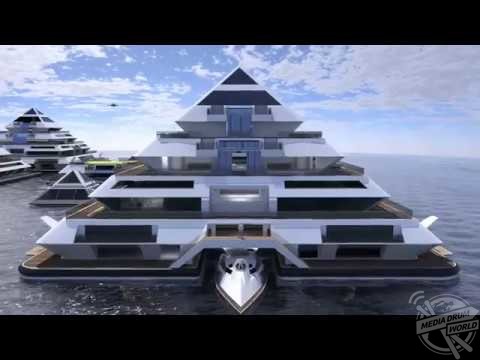 STUNNING concept pictures have revealed plans for an incredible floating city made of modular pyramids.

The high-quality renders show the main pyramid which offers a total surface of around 33,000 square feet on the basement level while it includes a large entrance for boats in the basement as well as a reception. The pyramid is structured over 10 floors reaching a maximum height of 98 feet from the surface of the water.

Other striking images show smaller pyramids which may act as houses, water slides from the top of some of the structures into the ocean and even one which acts as a floating football pitch.

Wayaland is the idea of architect Pierpaolo Lazzarini with the floating city expected to offer different living and entertainment facilities including hotels, shops, spas, gyms, bars and cinemas while it will be complete with solar panels and water turbines for energy supplies.

Mr Lazzarini is planning to initialise the building process of Wayaland, while starting a crowdfunding of the smaller two floors module, which are 33ft x 33ft.

He estimates that he will require around £306k to build the first Waya suite, a sum he hopes can be crowdfunded by people pre-ordering available nights in the year 2022 at around £875 per night.

“Each contributor will vote, to decide where to raise the first Waya modules in the world,” he said.

“Wayaland will offer a new offshore living experience, a self-sustainable community, built around the human on the water.

“The floating modules, anchored to keep the position, will be also easily adjustable, while manoeuvring with the lower mounted engines.

“The chassis, composed in part from fibreglass, carbon and steel, will be assembled piece by piece while climbing the structure, after placed the basement, directly in the water.

“Covered from surfaced solar panels, all the external surfaces of the Waya will be able to store energy from the sun.

“Each investor/contributor will become a citizen of Waya and will receive the Waya passport and an invitation for the 2022 inauguration.”

This is not the first outlandish design to come from Lazzarini after he released plans for a £1million UFO-shaped houseboat in 2016.

4 Practical Tips For A Worry-Free Vacation

Four Tips to Make Your Family Vacation A Success

These London Apartments Combine Luxury And Space Management To The Fullest