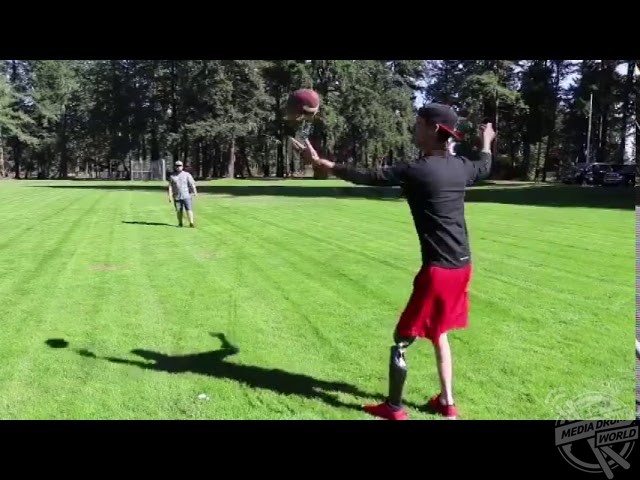 A TERRIFYNIG motorcycle accident left this sportscar fanatic PINNED between his motorcycle and a truck, leaving him PARAPLEGIC and requiring an eight-hour blood transfusion, before being woken from his coma to decide whether to have his leg amputated – but he has since defied doctors and is now an incomplete paraplegic.

Owner of Second Chance Racing, Tanner Arbuthnot (25) from Washington, USA was riding his motorcycle on January 30, 2016 when a truck pulled out in front of him, causing Tanner to hit the truck head on.

The force of hitting the truck made the back wheel of Tanner’s motorbike lift and hit his head. Tanner was folded backwards and pinned between the truck and his motorbike. Emergency services arrived to treat Tanner, but doctors feared he could die from his extensive injuries.

In the first two months after his accident, Tanner had 13 life-saving surgeries, including an eight-hour blood transfusion when he first arrived at the hospital. He also had a spinal surgery to remove a vertebra and then fuse his spine back together, leaving him with a five-degree curvature of the spine.

Tanner spent a week in a coma but upon waking up he was immediately asked to make the choice between amputating his left leg from the knee down or keep it and risk infection and possibly die from blood loss. At only 22, Tanner made the biggest decision of his life and had his leg amputated on February 9, 2016.

While his friends were exploring their young lives, Tanner had to learn to live as a paraplegic, making him very lonely because no one could understand what he was going through. Despite this, Tanner has worked hard on his physiotherapy and taught himself to stand up and move around with a prosthetic limb.

“I remember the truck pulling out in front of me but I’m very thankful to not remember the rest,” said Tanner.

“Right before the accident, I had let go of the handle with my left hand and glanced over at a house nearby. Then it goes black.

“I’ve had a flashback on the road while driving recently when a truck almost pulled out in front of me though. I remembered it catching my attention moving out in front of me. That short clip has been hard to move past mentally.

“It honestly damaged me from head to toe. I was overseen by some of the world’s best doctors who were telling me I was going to die or never walk or drive again.

“When I hit the truck, I hit it head first, then the back tyre of the bike hit my head due to the weight and force of the bike. It folded me in half backwards and pinned me between it and the truck.

“I had a brain bleed, multiple fractures in the neck, shattered vertebrae that was removed and replaced with a metal cage, a spinal cord injury making me a complete paraplegic.

“I tore three inches from my femoral artery, had two collapsed lungs, shattered ribs, broken clavicle, broken wrists, paralysed right hand, tore every ligament in my knee, both legs broken, both tibias broken, broken ankles and a degloving injury on my left thigh.

“At first they made my family say goodbye and told everyone it was unlikely I’d survive. As time went on and I made it through more and more surgeries and kept pushing to live, they became more optimistic

“I had multiple life-saving surgeries and they added up to 13 in the first month. I had an eight-hour blood transfusion for 14 units of blood to save my life the first night. Followed by a knee amputation, multiple knee manipulation surgeries and my spine surgery to remove one vertebra and then fuse the majority of my spine.

“I was in the ICU for over a month, and then in the hospital another few months. After a few months in hospital I was moved to an intensive care facility for a couple of months before going back to the hospital for a month of rehab, then I finally got to go home. But I don’t remember much of it, so it’s hard to know the timeline.

“I had just come out of the coma and they woke me up to decide whether to amputate or risk infection and potentially not surviving due to blood loss from the artery damage. So, at 22 years old, still not really knowing what was going on, I had to make the hardest decision of my life and give them permission to cut my leg off.”

The motorbike accident completely transformed Tanner’s life, but throughout the difficulties he has maintained a positive outlook and always pushed for progress.

“Every time they tell me something’s impossible, I roll away and accomplish that thing shortly after just to prove to myself,” said Tanner.

“I was 23 and all my friends were out enjoying life while I couldn’t get out there yet. Learning to live as a paraplegic is never-ending. It’s scary and this new lifestyle was so complicated with all the crazy injuries around my paralysis – I just didn’t know what to do.

“There’s no one like me that I know of with the combination of injuries, so I felt alone in that part of my recovery which was hard.

“Physiotherapy really taught me patience and the right way to push myself. Half the stuff I learned to do, like standing on my own, I taught myself while hiding from hospital staff in my bathroom because it ‘wasn’t safe to try’ according to them.

“I have feeling on the top of my thighs, and recently had some amazing new improvement in my inner shin. I don’t have much but I have about an inch worth of feeling which is great.

“I’m stronger than I thought I was. Throughout it all I’m proud to say I’ve had a smile on my face and enjoyed being alive. I got so close to not coming back so many times, I stopped breathing from the pain for a time in the hospital even, so I truly enjoy and appreciate this second chance at life.

“Second Chance Racing is a company I started on the second anniversary of my accident. I’ve been blessed to be able to inspire many across the globe and I just want to continue to help others that didn’t have the support I had.

“I’m racing and transporting cars across the country. It’s been something to look forward to and give me confidence to get out there and show others nothing can hold you back.

“If you have a dream, if you’re in recovery or if you don’t think you can make it out of something, you always can. Enjoy life and do what you love, you never know what could happen tomorrow.”