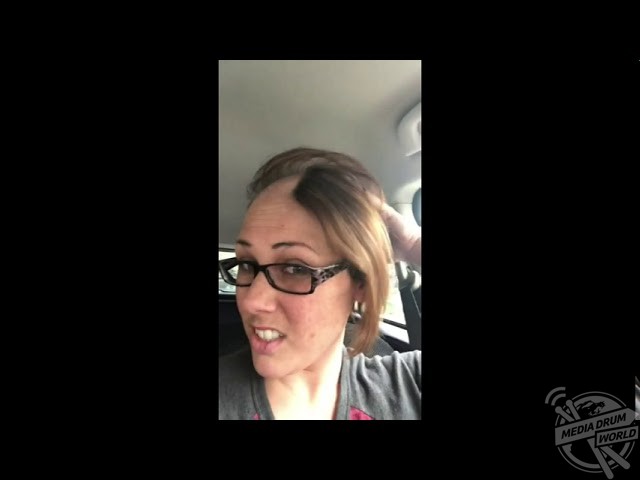 THIS WOMAN had brain surgery WHILE PREGNANT but delayed radiation for FIVE MONTHS for the sake of her newborn son, as she feared at first that her tumour caused his heart condition.

Area supervisor, Sheila Downing (33) from California, USA, found out she was expecting her second child in January 2018, but early on she started experiencing severe headaches. At the start of March, while 16 weeks pregnant, Sheila would sleep with an ice pack on her head to relieve the pain and she saw visual auras in her view which would come and go.

Sheila was given migraine medication and told it was just a tension headache. However, on March 9, Sheila was driving her daughter Sophia (2) who was almost one at the time to nursery and experienced the auras in her view. Fearing for her safety while driving, Sheila pulled over before returning home to rest further.

That night, Sheila’s husband, Joshua, noticed that she was breathing peculiarly so he woke her up, but she was very disoriented once awake. Joshua called an ambulance and Sheila had a seizure in the back of the ambulance, then another at the hospital.

An MRI was carried out at the hospital which revealed a tumour in the back, right side of Sheila’s brain. At 17 weeks pregnant, Sheila was told she needed brain surgery, making her incredibly fearful for her unborn baby’s health.

On March 12, 2018, Sheila had a craniotomy to remove the tumour and her baby was monitored throughout the surgery. At an appointment to remove her staples, doctors informed Sheila that she had a grade two slow-growing tumour, but she would have to wait until her son was born to receive treatment.

On August 8, 2018, Sheila welcomed her son Josiah who weighed 7lb 8oz. Unfortunately, Josiah was born with a coarctation of the aorta, which is a narrowing of the blood vessel carrying oxygen, requiring heart surgery at four days old. Sheila should have started radiation immediately, but her sick son needed her, and she wanted to breastfeed him to aid his recovery, so she delayed treatment until January 2019.

“I was excited to be pregnant again, but also nervous as I’d have two kids under two,’ said Sheila.

“I remember gradually getting headaches around 12 weeks pregnant. At first, they seemed like a mild headache, but they became more intense and lasted longer.

“At first, they’d last a few hours, but within a week they’d last all day. Eventually they never went away. A few times they got so bad I slept with an ice pack on my head.

“Then the weekend of March 3, 2018 I was at work and I got dizzy then had visual auras. I was about 16 weeks pregnant, so I called my midwife who said it wasn’t normal and to go to the hospital. At the hospital they gave me migraine medicine and said to follow up with a neurologist.

“I went home to rest and then followed up with a neurologist who told me it was a tension headache. I tried to rest but it gradually got worse.

“At first the visual auras were just small dots in the top left of my eyesight, but eventually these auras became bigger and lasted longer.

“On March 9, I remember driving my daughter to nursery and the auras started, but they were longer so I pulled over because I was so scared.

“I eventually got home and rested all day. That night my husband said I was breathing weird. He tried to wake me, and I was really confused so he called an ambulance.

“I had a seizure in the ambulance and another at the hospital. They believe that my first was in my sleep that night.

“At the hospital they did an MRI, that’s when they found my tumour and they told me I needed surgery on my brain.

“I was so confused and scared. I was 17 weeks pregnant, needing brain surgery. I didn’t know if my baby would be okay. I was so nervous about myself and my baby. Plus, I had another baby at home who wasn’t even quite a year old.

“On March 12 I had surgery and after that I did great. I could walk, talk and eat. The little things were so important because I was lucky to be alive.

“After the surgery I rested as I couldn’t even lift my own child. I would sit on the floor and let her crawl into my lap since I couldn’t lift her. I felt so sad that I couldn’t physically take care of her like I did before.

“On March 25, 2018 we celebrated my daughter’s first birthday. I had over 30 staples in my head, but I put on a smile and celebrated the day. We had a Wonder Woman theme which was quite funny because I felt like Wonder Woman myself.

“For the next few months I focused on staying healthy as I wanted a safe delivery. I went for a follow up visit a few weeks after surgery to go over the results. I was probably about 19 weeks pregnant and I found out that I had a slow growing tumour.

“The tumour that was removed from my brain was an oligodendroglioma tumour. They removed as much as they could, but because it’s a slow growing tumour, I will always have it.”

Sheila had to postpone treatment until her pregnancy was over for the safety of her son, but at 37 weeks pregnant, an ultrasound revealed her son would be born with a heart condition.

Josiah was born on August 8, 2018 and he was quickly taken to the NICU for assessments. Josiah had surgery when he was four days old and went home two weeks later.

“I decided to wait for treatment because my child needed me. I focused on him and put my needs aside,” said Sheila.

“I thought that somehow my surgery and my tumour caused my son to have a heart condition. I thought it was my fault.

“I convinced my doctor to wait at least three months so I could breastfeed my son. She said it was fine if my scans didn’t show any growth.

“I had to have constant follow up MRIs, but at the time I needed to be there for my baby. I wanted to breastfeed him and make him strong. I continued with my follow ups and everything looked good, so we planned to start treatment in December.

“December came and I began to wean my baby off breastfeeding then I got fitted for my radiation mask. Eventually I began treatment on January 3, 2019.

“I had to take a chemotherapy pill called Temodar every day, one hour before radiation. I had radiation done Monday through Friday every day, for a total of 30 treatments.

“Between mine and my son’s health, we are both doing great. I try to live one day at a time. If you worry about everything you won’t be able to enjoy today.

“His condition is completely unrelated to my tumour. The doctors explained that his condition would have developed long before I even knew I was pregnant.”

Woman’s Boyfriend Is Mistaken For Her Grandad

Girl Faints When She Laughs Due To Rare Condition

Woman Surprises Fiancé With Wedding On The Beach

How To Avoid Spending Too Much On Your Vacation