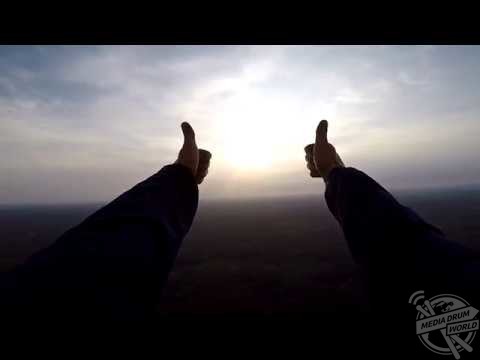 STUNNING footage has revealed one brave man’s ascent to the summit of a tower which stands at over twelve-hundred feet-high, before bravely and dangerously hanging from the peak one-handed.

“The tower is highly secured, so I had to go early in the morning when the security guards aren’t looking at the cameras,” he said.

“I had to climb over several fences on my way before climbing up the tower itself.

“It’s 370 metres high but luckily I’m not afraid of heights so the climb wasn’t too scary, the only thing I was concerned about was the cold wind at the top!

“When I got to the top I could feel the tower swinging side to side because of the wind.

“Then when I climbed down I thought the police were waiting for me, but fortunately I as mistaken and no one had noticed me.”

Alex went on to describe his passion for his work, detailing the techniques he uses to get his amazing shots.

“I really like to look at different towns and cities from an unusual perspective,” he said.

“A few years ago, I climbed to the roof of a tall building for the first time, there I realised how beautiful views are from heights.

“Since then, I’ve climbed numerous rooftops and towers, taking beautiful photos and videos so that people who are maybe afraid of heights can watch them online.

“I usually shoot with my GoPro camera and Canon 600D, I want to show people that you shouldn’t look at the world from just one angle and there is something more than just walking through the streets.

“Most people are delighted with my photos, they like to look at photos from a height, especially those who are afraid to climb themselves.”