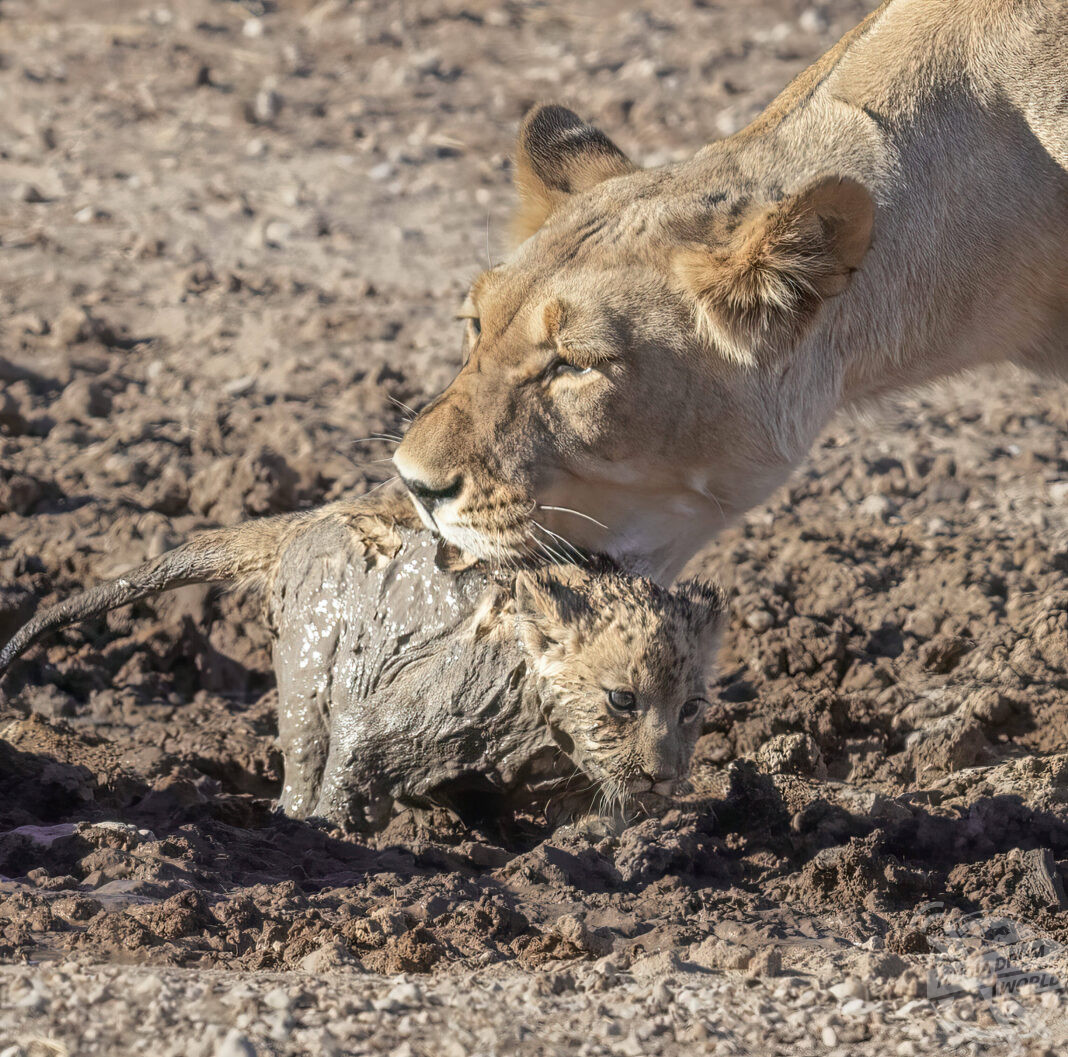 ADORABLE IMAGES of a lion cub being saved from a mud puddle by its mother have been captured from 160 feet away.

One image shows the lioness picking her muddy cub up in her mouth.

Another shot shows the cub looking out of the muddy hole up at mum waiting for her to come to the rescue.

Mother and cub walk together after the rescue before mum begins cleaning off her baby.

These images were captured by photographer Sharlene Cathro.

Sharlene captured the images on her Canon EOS R, one with a Canon 600mm EF lens the other a Canon ER 100-500mm at Urikarrus Camp waterhole,  Kgalagadi Transfrontier Park, South Africa.

“We came to a dry riverbed crossing directly in front of us was the mother lion walking with her cub,” said Sharlene.

“We knew the lioness and her cub were walking to the waterhole situated in the camp we were staying at. It had  been a very unusual morning.

“The lioness and baby were our third lucky visitors that morning. By this stage, the little cub had walked a good four miles and we could see it was exhausted.

“It kept stopping to lay down and called out as if to say ‘Mummy I’m so tired I need a rest’ but she kept growling and telling the poor thing to come along.

Those tiny little legs doing at least fifty to one, in comparison to Mum. They finally got to the waterhole that had overflowed and there was a plethora of mud around the outside.

“Mum had a good drink and was walking off when the little one was trying to catch up. All of a sudden the cub realised this was not hard ground but very soft *poof* the little thing disappeared and all we could see was its little head trying to peer over the top.

“Mum had to come back as I am sure she heard the distress in the little ones calls, this was not tired but rather ‘HELP’

“As you can see from the pictures and video, when pulling the baby from the mud, she was not entirely keen to get her feet muddy.

“Any animal with an infant, I just can’t resist. I absolutely love and adore them. They are so inquisitive and entertaining. The perfect subjects to shoot as they are always busy and oh so photogenic.

“The mother looks like she is giving the little cub a stern talking to, just like a human mum would do when faced with a little one absolutely drenched  and  full of mud.

“I think her expression just says it all. The seemingly human interactions you get to witness with young animals, and the animal kingdom at large continues to astonish me.

“Friends and family that have seen them love them and resonate with the expressions.“Cute!” Is a common response.”

Forgotten ‘Home of the Future’