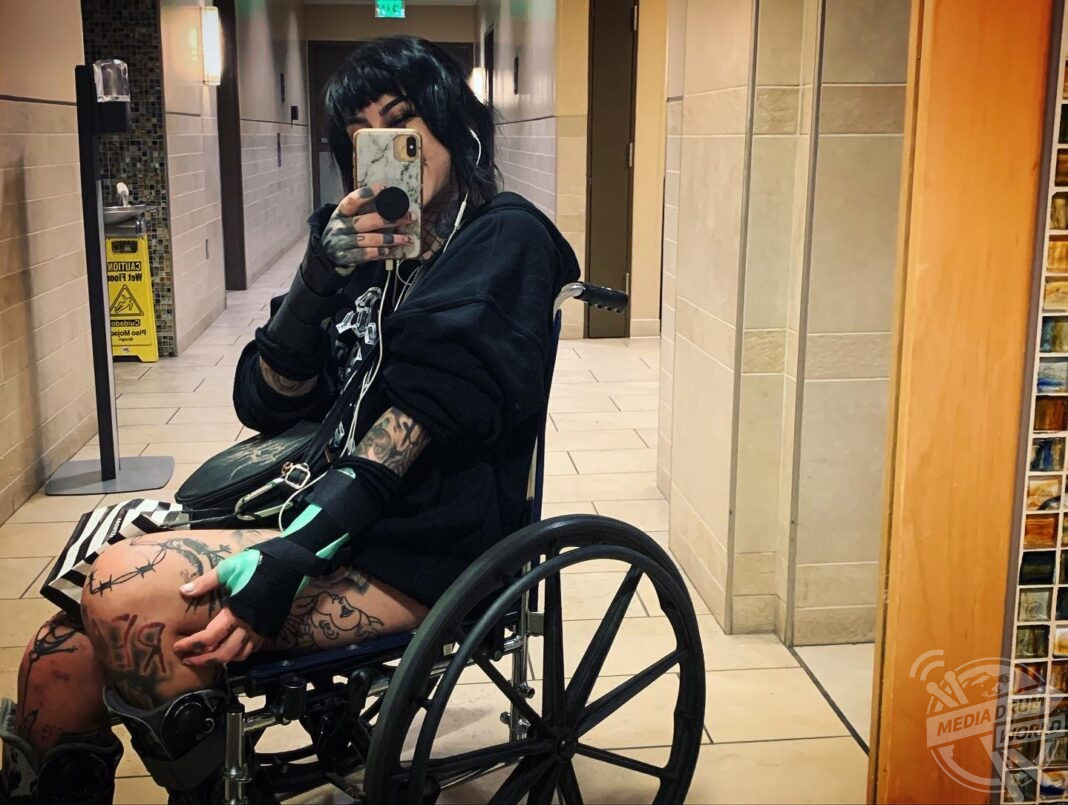 THIS STUDENT has ninety percent of her body covered in tattoos but she says the pain of ink is nothing compared to falling four stories through a faulty building.

Savannah Haskay (27) a biochemistry student and freelance artist from Salt Lake City, Utah, United States has always been interested in tattoos and modifying her body.

Savannah at one point counted 78 tattoos but she has had more since and has frankly lost count, she also has her ears stretched to 2 1/4 th, her tongue split, her septum is stretched to a 00g, “Dahlia Bites”, double nostril piercings, nipple piercings and a top belly button piercing.

Savannah estimates she has spent around £7,000 on her back piece alone and she understands that the money could be spent on other things, one comment she received was that she has thousands of pounds worth of tattoos and no car, while this is accurate Savannah just laughed off.

An expense that Savannah perhaps was not expecting is the £420,665 worth of medical bills that she now faces after a faulty building sent her falling through the fourth floor, to the ground.

Savannah broke her spine, both legs, both arms, ribs and pelvis.

Savannah has invested a lot in her body modification and responses vary from overwhelmingly positive to disgust.

“I honestly don’t know if I want to know how much I have spent all together. I spent over £500 on my split tongue, my back piece is worth over £7000 so far,” she said.

“Depending on the artist each tattoo varies in price.

“I could not count how many pairs of plugs I’ve purchased, and at my current size (2 ¼”) they can easily cost a few hundred pounds.

“Throughout my life I’ve had a variety of different piercing combos, ink placed over existing tattoos, and honestly most months I’ve worked on my body at least a bit.

“One insult I received made me laugh, they said ‘she has thousands of dollars of tattoos and no car’ which is completely accurate.

“If I have the means then money doesn’t matter when this passion brings me this much happiness.

“I get various responses. Of course there’s the people that will use them as an excuse to treat me negatively, however that response doesn’t matter.

“Overall I love the compliments I receive. I’ve noticed most people will use my body modifications as a conversation starter. It is a little weird when someone asks me to stick out my split tongue or gawk at my ears but it doesn’t really bother me if they don’t push a boundary.

“It’s easy for someone to judge the appearance of others, but it makes me happy when someone who may not even agree with the aesthetic can recognise the amount of effort that I’ve put into it.

“People will try to draw the line for you on what is acceptable and what is considered too much.

“I’ve had exes try to tell me I have enough, that I’ve reached some predetermined limit on how large I should stretch my ears, how much I should modify my body and how many tattoos I get.

“Some people tell me I’m beautiful but I’ve covered my body in tattoos. There is definitely a polarisation on this unspecified limit of what each person who doesn’t own my body thinks I should do with it.

Savannah has recently had a drastic setback in her life after falling four stories in a faulty building.

“On August 17th I fell three to four stories through the balcony of an old building, leaving me severely injured. I broke both of my arms, my ribs, pelvis, each of my legs, one of which was completely shattered internally and required major reconstructive surgery, and my spine,” she said.

“I underwent three back to back emergency surgeries which took the better part of two days. I needed three blood transfusions and will require more surgeries to remove the metal plates/rods/screws that have been implanted throughout my body. All my limbs are metal now, I guess that’s the ultimate body mod.

“Finding the right combination of medications has been its own battle of trial and error. I was on narcotic pain meds for my broken bones, meds for nerve pain because I also have nerve damage in one of my arms, muscle relaxers, digestive and sleep aids.

“The stress of being in the ICU mixed with the amount of and combination of medications had a very negative impact on my mental state which triggered postoperative delirium, which is considered an emergency in and of itself and has its own risks of long-term side effects.”

Savannah has spent over half her life modifying her body in some way and her family and friends are always there to support her, it was actually her dad that set her up with her first tattoo artist.

“I’ve been getting tattooed for about 12 years now, and prior as an angsty teenager I started piercing my own body, please do not do that, and experimenting with different hair. So, I’d say I’ve been working on my body for around 14-15 years,” she said.

“My first mod was the stereotypical Claire’s toddler ear piercings. I’m almost certain at 13 I started shoving safety pins in my lip.

“My first tattoo was when I was 15, I got an anatomical heart done on my stomach. Of course it was done on a kitchen table, do not do as I do.

“My dad was actually the one who set me up with my first proper tattoo artist. Before he passed he definitely encouraged my individuality, and I’ll always love him for that.

“Aside from being a teenager stabbing my face with safety pins and obviously being scolded for it, my family has always been very supportive and not judgmental.

“After my grandma first saw my stretched ears she asked me, ‘why do you let the mosquitos fly through your ears’ and we all laughed about it.

“My most recent modification was adding another tattoo to my face. I had it done about a day ago, it’s a feather on my cheek tracing my jawline.

“My most painful modification to heal was definitely my split tongue. My artist did an amazing job, however I couldn’t eat for almost a week afterwards.

“It’s one of my favourite mods I’ve received and I’d do it all over again. My most painful tattoo was my back. I’m dreading having it finished.

“I wouldn’t be friends with people who would have a negative opinion about it. My friends and I hype each other up about each mod we’re able to get.

“As long as we’re of sound mind, we would not make negative comments about each other like that.”

Savannah has a lifetime of experience to pass on about modification if you are looking to pursue it. She shares this advice.

“Think about it carefully, but don’t think about it too much. I think someone should definitely contemplate heavily on whether or not modifying their body would fit them professionally or personally,” said Savannah

“But, once you’re comfortable, don’t overthink it. I gave myself anxiety for the longest time thinking about what others’ opinions would be on my body. In the long run, if it makes you happy, by all means do it.

“Body modification is a beautiful, dedicated art. I love the art and beauty in everyday life, my studies, my passions as well as the individuality of others.

“If you are doing what makes you happy without harming others, I think that’s beautiful. Body modification has made me feel comfortable in my own skin. There is absolutely nothing wrong with that.”

Savannah is determined not to let her accident hold her back.

“Doctor’s estimated it’ll be until at least the end of October before I could walk partially and will likely be largely reliant on a wheelchair for some time after,” she said.

“The high level of care necessary for me to be able to live a mobile, independent life has an even higher cost to it and there’s just no way I can manage this on my own.

“I’m recovering, but my medical bills are still over 500,000 USD. I have set up a GoFundMe. Anything helps.”

A Body So Good It’s Accused Of Being Fake! How This...