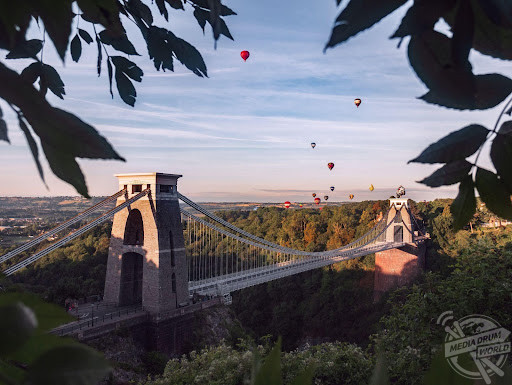 Great Britain has always been and remains a popular destination among couples. Not only in England, but also in other parts of the United Kingdom, there are many romantic and picturesque places that are great to spend your honeymoon. The people of Bristol call their city the second capital of England, as this place is just as great as London in the number of attractions. Couples who come here on their honeymoon can enjoy the exciting nightlife, fun and entertainment throughout the city, and most importantly, make their romantic trip unforgettable.

You can start your journey with a promenade along Bristol’s waterfront. Bristol Harbor is the heart of the city, there you can find the city’ s main port, numerous historical museums and a large number of shops and restaurants. The former workshops and warehouses of the harbor are now converted into cultural centers, bars and nightclubs. So after a walk along the waterfront, you can enjoy a traditional dinner at a restaurant or take a boat ride with a view of the night city.

Do not forget about the little details that make a special charm of a romantic night, for example, a bouquet of flowers will be a great sign of attention for your beloved one. In order to make it easier and escape searching for a flower store nearby, make a choice in favor of flowers delivery service, that way you will be able to choose a perfect bouquet in advance as well as specify the time and place of delivery. The effect of surprise will definitely impress your partner and give pleasant emotions.

While taking a boat trip, you will definitely notice the city’s tallest bridge. The Bristol Bridge was built in the 13th century and is a true national treasure. In the evening, a huge number of musicians and tourists gather on the bridge to listen to local music and dance.

As you have already realized most of the sights in this city are somehow related to water, as Bristol isone of the English port cities. The steamship “Great Britain ” is famous due to its long history, since the existence it has been both a fighting and a cargo ship. Currently the steamship is a museum, visitors can go inside to see the exterior and also have lunch in the beautiful dining room, which can seat up to 360 people.

If you’re a little tired of visiting museums and sightseeing we suggest you stop by The Llandoger Trow Pub. This is a legendary pub that was built back in the 17th century. The Llandoger pub is historically connected with the development of seafaring in England, where sailors were permanent visitors for several centuries. The interior of the pub is reminiscent of the past: antique clocks, paving stones, the blackened from time ceiling, the atmosphere of the place will bring you back a few centuries.

An ancient church that is located in the center of Bristol is one of the finest examples of Gothic architecture in England. Even Queen Elizabeth I called it the most beautiful church in the entire kingdom. The church building is still considered the high point in Bristol, its altitude is about 90 meters. On the observation platform of one of the towers of the church you can enjoy a wonderful view of the whole city.

The Victorian Rooms, an ancient concert hall and cultural center, was built and named in honor of Queen Victoria. The building has an unusual appearance as it was constructed in the Greek architectural style. Currently, the concert hall regularly hosts music evenings, inside the building there is also a museum, a recording studio and a lecture hall.

We hope you will find this city attractive with its ancient history and picturesque nature. Wishing you an amazing trip that will bring you many happy memories!

A Face Everybody Could Love: ‘Happiest Dog In The World’ Moose...