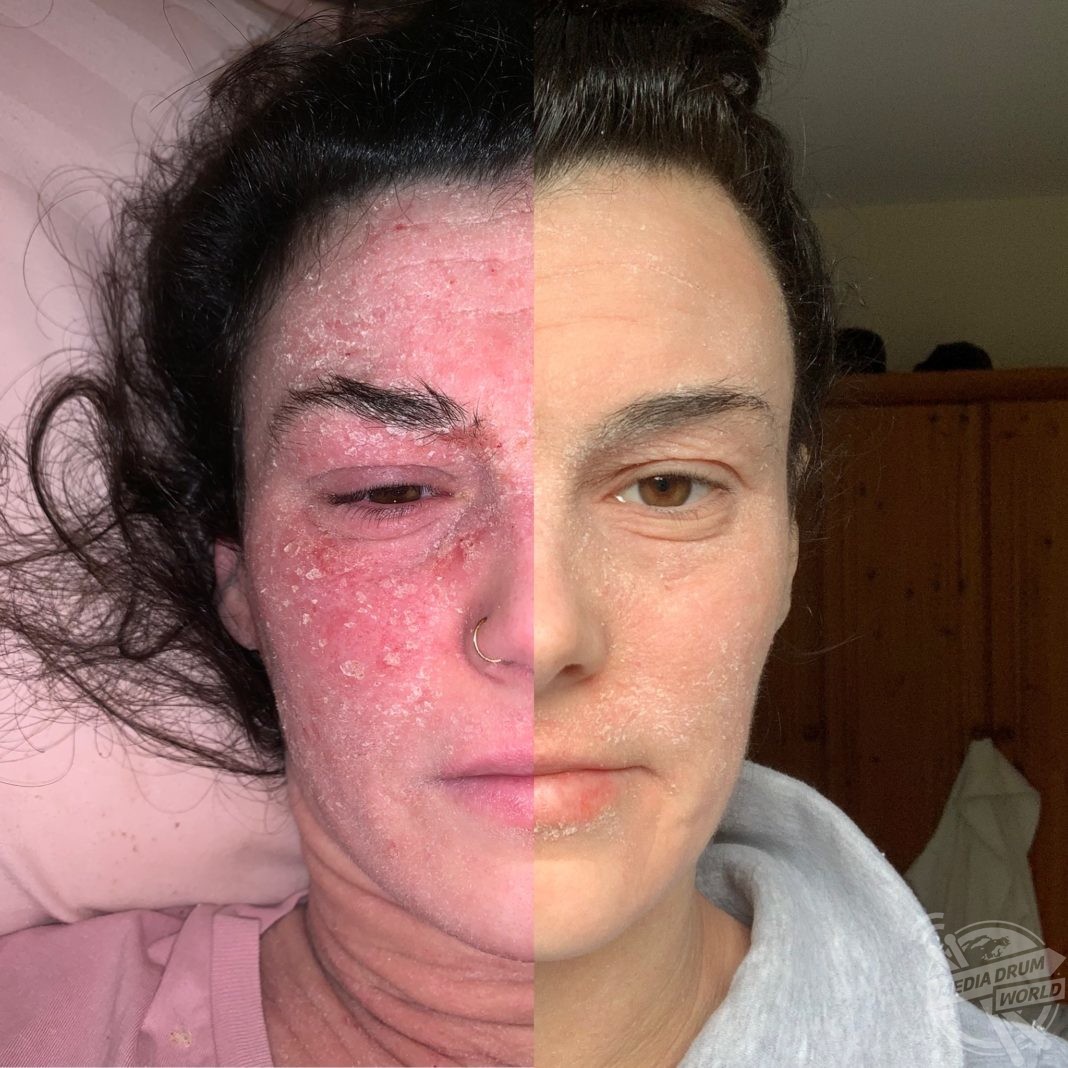 THIS WOMAN struggles to RECOGNISE HERSELF in the mirror after ditching steroids and makeup in a bid to heal her eczema ravaged skin.

Social media influencer, Stephanie Meredith (32) from Manchester, UK, was diagnosed with atopic eczema at six-months old and was given Hydrocortisone cream to treat it. As a child, she had eczema at the back of her knees, in her elbow creases and dry skin on her eye lids and upper lip that she was prescribed steroid creams and moisturisers for.

Over time the eczema spread to Stephanie’s hands and she was prescribed a stronger cream called Elecon as Hydrocortisone was no longer effective. Throughout her life she’s used steroid creams sporadically to control her eczema flares until they subsided.

But in September 2018, Stephanie was made redundant, the stress of which caused her eczema to flare across her body and onto her face and when she resorted to using her trusty topical steroid creams, they seemed to make her skin worse instead of better.

Confused, Stephanie spent the next year trying to work out why her skin was getting worse with countless GP visits, two trips to A&E and appointments with private consultants but after blood and allergy tests, she was only prescribed higher strength steroid creams and oral steroid tablets.

In 2019, moisturisers were burning Stephanie’s skin despite taking her medication as instructed, trying to cut out dairy and reducing dust in her home that might cause her skin to react.

Fed up, Stephanie decided to share her eczema woes on Instagram when a follower suggested she watch YouTube documentary, Preventable, which explores the use of steroid creams – she realised that her severe skin was not in fact eczema but she was going through topical steroid addiction (TSA) and topical steroid withdrawal (TSW), when the skin reacts adversely after long-term use of topical steroids is stopped.

On September 4, 2019, Stephanie went cold turkey in a bid to heal her skin naturally, she’s stopped using moisturiser and only showers once or twice a week to try and force her skin to self-moisturise.

“As I got older, I got more frustrated that I hadn’t grown out of it [eczema] and that it was appearing in different places. I was constantly worried and anxious about triggering flares with products I used or foods I ate, never understanding what caused it and constantly feeling helpless and self-conscious,” said Stephanie.

“I was told all my life by doctors that I would always have eczema, it couldn’t be cured, and the only way to manage it was with steroid creams and moisturisers. So, I felt like it was a burden I was stuck with and I just had to accept I had ‘bad skin’.

“My eczema was always manageable with steroid creams, until I became addicted, so I was never offered any alternative treatment prior to TSW by my GPs over the years.

“When I paid to see a private consultant he referred me for light therapy through the NHS, but by the time I received this three months later I was already going through TSW and it didn’t help my skin, it made it worse, so I stopped.

“At the time [when I was being prescribed stronger creams after being made redundant] I was just relieved to have something to calm my skin because I was so desperate for relief from the pain and physical symptoms.

“It was more frustrating that I was given different diagnoses by different doctors; I was told I had seborrheic dermatitis, atopic eczema, and it was even suggested that I might have Lupus. I was given routine blood tests by my GP to try and find an underlying cause for my ‘eczema’, but they came back normal.

“It was only when I paid to see private dermatologists that I was given blood tests and patch tests, but again these didn’t explain my severe and worsening ‘eczema’ and I was given yet more steroid creams to use on my skin, my face in particular.”

Stephanie hasn’t used any beauty products or worn makeup since starting her TSW journey and uses a natural donkey milk soap to cleanse her skin when washing.

Watching Preventable in September 2019 was the trigger for her healing journey.

“Honestly, I was relieved that I finally knew what was causing my skin to be so bad, because I’d spent over a year with no idea and trying to find the root cause,” said Stephanie.

“I knew instantly that I wasn’t going to go back to the steroid creams and that I wanted to let my skin heal itself. But I also felt stupid that I hadn’t realised that it was the creams I kept being given that were causing all the problems.

“I noticed the effects straight away and within the first week my skin looked and felt different, very different. It reassured me that it was the steroids that were the root problem, because without them my skin had gone from bad to worse very quickly and nothing else in my life had changed.

“I think the hardest thing for me is that I have used a medication all my life that I thought was helping me, and was told would help me, but the reality is it has worsened my original skin condition to the point that I can’t work, can’t look after myself and live alone, and destroyed my skin to the point I haven’t recognised myself in the mirror for months.

“It’s also extremely difficult that doctors don’t acknowledge TSW and there isn’t anything to help me get better except for time. TSW has flipped my life upside down overnight but I know if I don’t go through this I will be a prisoner in my own skin for the rest of my life, because I don’t have eczema anymore, I have a steroid addiction. The two are very different beasts.

“Right now, I’m in my seventh month of TSW and a good phase of healing and am seeing visible improvement for the first time in a few months which is reassuring.

“I’m still in a lot of discomfort/pain and I have a long way to go before I can say I am healed, but I feel so much better than when I was using the steroids. I can see a big difference in my skin even though it is still far from how I want and need it to be.

“My Instagram is a big part of my life and I’ve always shared my life with my followers, so when I started having severe flare ups in 2018, I literally couldn’t hide them. I wanted to show people life, especially on social media, isn’t perfect, so I started to document my journey and share my struggle with my followers to let them know about my eczema.

“I was overwhelmed by the amount of support and messages I received from people offering advice and products to try and help my skin and get to the bottom of the root cause. I was also shocked by how many people reached out to me sharing their own skin struggles and now I’m going through TSW I’m passionate about raising awareness of the condition.”

Despite not always being happy with her outside appearance, Stephanie believes that her recovery has positively affected her life.

“It’s been difficult to accept what I look like at times and not be able to wear makeup and go out and live a normal life. But it’s taught me to love myself so much and accept who I am despite my appearance,” she said.

“It’s also given me an opportunity to spread awareness of the dangers of steroid creams through my social media, and to help others who are struggling with similar skin problems. I’ve been able to show people that it’s okay not to be okay and there’s so much more to us than our appearance.

“I’ve had so many messages from people thanking me for my honesty and rawness telling me that I’ve helped them and educated them.

“I have an inner strength and resilience now because of TSW that I didn’t have before, and I know if I can get through this I can get through anything in life, and there is a huge TSW community online where I’ve met some truly amazing people who I will stay in touch with even after TSW.

“To anyone who is worried that they have topical steroid addiction and is facing TSW I would definitely use the resources out there to learn about the condition and its effects; ITSAN.org, the Preventable documentary on YouTube and the TSW Facebook groups are three resources that have helped me to understand TSW and how it will and is affecting me.

“This is such a hard process to go through so it’s important people are in a position to go through it, because it literally changes your life as you know it, and I believe knowledge is power.

“It’s extremely hard both mentally and physically but it’s so worth it and I know I’ll look back one day and be so pleased I let my body heal naturally.”

This Adventurer Travels Across Some of The Most Stunning Glaciers In...