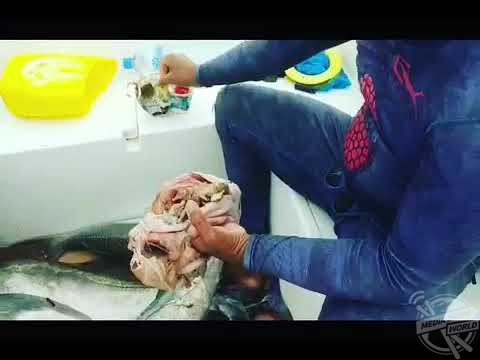 SHOCKING images and video footage have revealed the stomachs of dead giant trevally fish to be full of plastic and other rubbish.

The video shows a fisherman using his knife to slice open the stomach of one of the dead fish.

He then pulls out the contents of the stomach which is full of plastic and other waste that has been discarded in the ocean.

The horrifying video was taken in the Maldives by a fisherman named Siruhaan who had caught the giant trevally for food only to find it full of plastic.

“This is one of the major global issues now. Discarding things into the ocean affects all living creatures,” he said.

“We see this more often now than in the past. Many people are shocked and feel sad about it here.

“There needs to more awareness of this issue and we must reduce our plastic use as well properly disposing of our rubbish rather than dumping it in the ocean.”

They also predict that if current trends continue, our oceans could contain more plastic than fish by 2050.

The giant trevally is distinguished by its steep head profile, strong tail scutes, and a variety of other more detailed anatomical features. It is normally a silvery colour with occasional dark spots, but males may be black once they mature.

The giant trevally is an apex predator in most of its habitats and is known to hunt individually and in schools. The species predominantly takes various fish as prey, although crustaceans, cephalopods and molluscs make up a considerable part of their diets in some regions.

The giant trevally is both an important species to commercial fisheries and a recognised gamefish, with the species taken by nets and lines by professionals and by bait and lures by anglers. Catch statistics in the Asian region show hauls of 4,000–10,000 tonnes, while around 10,000 lbs of the species is taken in Hawaii each year.