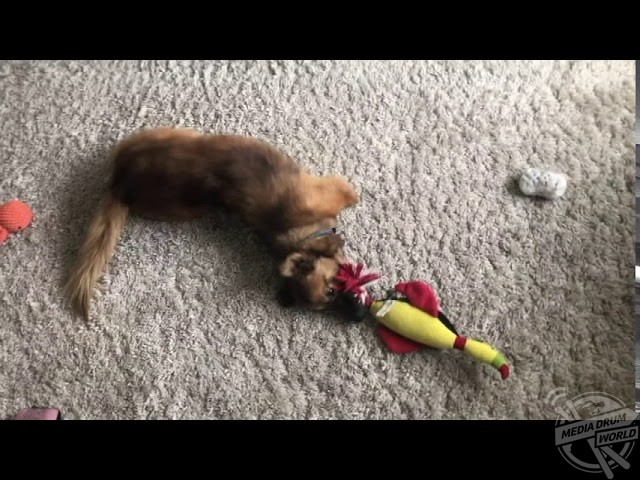 THIS POOR dog had his front legs CHOPPED OFF for digging a hole in the garden but he was later rescued and then adopted by a couple in Canada after they spotted his heart-breaking story on FACEBOOK – and now he is training to be a therapy dog for other amputees.

Estate agent, Erin Blaak (31) from Toronto, Canada, and chef, Romain Avril (33) originally from Paris, France, already own a Pomeranian called Bandito and a Labrador-Dane mix breed, Brady, but while scrolling through Facebook, Erin came across a heart-breaking story of a rescue dog in Ukraine.

The post shared the story of a two-year-old mixed breed named True, who was digging a hole in the garden while his addict owner was high. After seeing the digging, the owner cut off True’s two front legs. True dragged himself as close as possible to the neighbour’s house who eventually found him and took him to a shelter.

The shelter kept True for a few months, but they were concerned that he wouldn’t survive the winter due to his handicapped state. When he had healed physically, the shelter reached out to one of their rescue partners in Canada, Cause 4 Paws, to spread True’s story on social media and start fundraisers for his flight and initial medical bills.

Reading about True’s experience instantly made Erin want to adopt him so she reached out to the rescue centre. On December 4, 2018, True was taken to Toronto where he was greeted by his new family at the airport.

True has settled into the family well, but his injuries mean that he needs to be carried around a lot of the time and he gets tired easily, although Erin and Romain have to make sure he gets enough exercise to prevent weight gain.

While in the house, True has learned to walk on just his hind legs and is even able to jump on the sofa and the bed. However, when he goes outside, he uses a wheelchair in place of his front legs. Erin is currently helping True become a therapy dog and she hopes that he can bring joy and inspiration to amputees who are facing lifechanging challenges.

“I wasn’t even looking for a dog as we already have two, but I follow rescues on Facebook and his picture popped up with his story,” said Erin.

“True is from Ukraine and his owner was high on drugs. True was digging a hole outdoors, and his owner hacked both of his front legs off. The owner later died of an overdose. One of the neighbours found True as he had dragged himself close to their house.

“It absolutely broke my heart. I spoke to my boyfriend and I called in immediately and offered to foster him. The rescue that brought him over is called Cause 4 Paws and they’ve been doing this for several years and they have rescued over 1000 dogs.

“We first met True in Toronto airport and it was emotional but we were very happy to have him and give him the life he deserves.

“True has fit in really well to our family and he loves all dogs and people, so he gets on well with our other dogs. He just wants to be loved by all.

“He needs to be carried a lot of places as he gets tired very easily and little movements are much harder for him. But we need to make sure he gets enough exercise because he’s prone to gain weight due to his condition. He can jump up onto my bed and the sofa, however getting down is a challenge and he always hurts himself. I can’t stop him though, he’s determined.”

Whilst True has successfully learned how to get around using just his hind legs, he has recently started using a dog wheelchair for when he goes outside, enabling him to walk for longer without needing breaks.

Adopting True has taught Erin and Romain about animal cruelty which unfortunately happens far too frequently. Erin has since planned and hosted fundraisers for Cause 4 Paws to help with their rescue efforts as well as fundraisers for True for his water therapy, medical bills, his custom wheelchair and prosthetics. Erin’s fundraisers focus specifically on helping dogs that have suffered abuse in the past.

“In 2019, True started using his wheelchair and he really likes it. It’s challenging for him to learn, so he’s still trying to learn how to turn around,” said Erin.

“We are training each day to hopefully be able to go for longer periods of time with the wheelchair. He also has temporary prosthetics which we are working on as well.

“He just uses the wheelchair when he’s outside, but around the house he walks on his hind legs – slowly and with breaks. He can jump up on the sofa without a wheelchair, but he cannot lie down in the chair.

“The first fundraiser I did was for True so we could pay for his water therapy, his wheelchair, his prosthetics, and any other needs. We received support from across the country and we raised a total of over £20,000. We’ve helped many more dogs since, both locally and internationally.

“We are so lucky to have dogs in our lives and we don’t deserve their unconditional love. I think it’s important to respect all creatures on our planet. I understand there will always be a debate between vegans and vegetarians compared to people who eat meat; however, I think killing for sport, or cruelty for one’s entertainment must be stopped. There should be more consequences in place.

“It’s sad how much animal abuse and cruelty there is in the world. There’s a lack of laws preventing this and in countries where there are a lot of street dogs, they reproduce rapidly, and are often starved, hit by cars, or purposely tortured.

“True and I are going through the process of applying to get him qualified as a therapy dog. It’s our hope to visit the amputee divisions and bring joy and healing to those need it. True loves to cuddle and make people happy, as do I. We can’t think of a better way to spend our time.”

To see more of the work that Cause 4 Paws do, visit www.c4ptoronto.com, and to read more about True’s journey, go to www.instagram.com/true.cause4paws