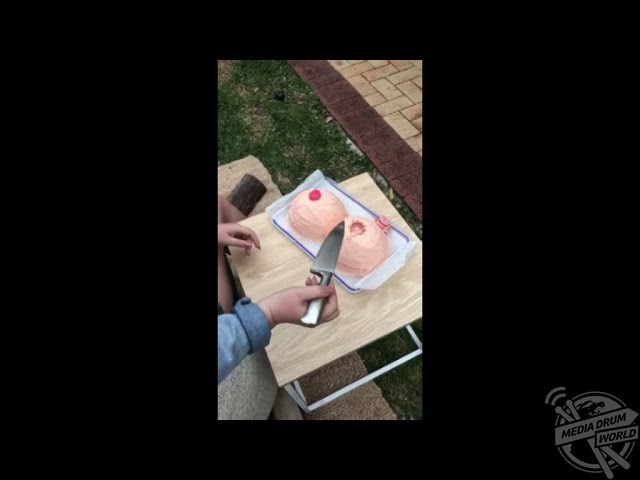 MEET THE woman who was given a EIGHTY PER CENT chance of getting CANCER after testing positive for the BRCA1 gene and decided to undergo a preventative DOUBLE-MASTECTOMY – but not before her friends threw her a BOOB VOYAGE PARTY complete with a BOOB CAKE, BOOB PINATA and a BRA BONFIRE.

In April 2018, psychology student and youth worker, Jaimee Watts (27) from Perth, Australia, was at one of her friend’s house when she got a call from her genetic counsellor who told her that she tested positive for the BRCA1 gene, meaning that she had a 80 per cent chance of developing breast and ovarian cancer.

Out of the two options of regular six-month check-ups and a double-mastectomy, Jaimee felt the best chance to prevent getting cancer was to have the surgery, as her mum was diagnosed with stage three ovarian cancer two years prior and her mum’s sister lost her breast cancer battle at the young age of 31.

After weeks of processing the news, Jaimee booked the double-mastectomy surgery for October that year. In September 2018, Jaimee’s friends, who have been supportive throughout her journey, decided to throw her a party dedicated to celebrating her breasts before she had the surgery with a ‘boob cake’, a piñata shaped like boobs, a bonfire where they burned all of her bras and even had an astrologist predicting their futures.

In the run up to her surgery, she attended therapy sessions where they discussed with her the implications of the double-mastectomy. She struggled the most to come to terms with knowing that she would not be able to breastfeed, her chest could be numb from her ribs to her lower neck and that even with reconstruction, they may never look the same again. However, she remained confident about her decision. She had the chance to pose in the nude for a photographer before her surgery which made her feel empowered.

The surgery lasted six hours and for six weeks post-surgery, she had to limit her movements. Due to complications, she had to have another surgery to remove her implants and due to the high risk of infection, she was left flat-chested for the next three months, which made her feel traumatised.

In February 2019, she underwent her fourth surgery to put tissue expanders in her chest which slowly expanded over a few months and had her final surgery in June 2019 to replace the expanders with regular implants which are now healing.

“At the time I found out I was at my best friend’s house and received a call from my genetic counsellor,” Jaimee said.

“When the genetic counsellor told me I was positive, I felt quite numb on the phone and logically I reasoned that I knew it was a fifty-fifty chance.

“However, when I got off the phone, I looked at my friend and burst into tears. I think the shock of actually falling into the fifty-fifty range is actually not something you can prepare for.

“It took me a few weeks to really process what my options had now become. All of a sudden, I was having to change my plans for the year to accommodate surgeries.

“Most days I would try not to think about it, however, I was studying a lot and the emotion would come upon me suddenly and I’d be left in tears trying to read my textbooks.

“I knew that I couldn’t carry on with this hanging over my head, and that for me having surgery as soon as possible was my best option.

“I have watched so many people in my family get a cancer diagnosis and most of them did not survive; for me comparing that scenario to getting a mastectomy seemed like a no brainer.

“Watching my mum go through chemotherapy and seeing the toll it took on her body and her mental health is enough for me to know that I would do anything to avoid that in the future.

“Other options include monitoring which means getting six-monthly check-ups and breast scans from a younger age; this option is great as you are more likely to catch the cancer early if you do develop it.

“I did have some time in therapy before my surgery to discuss the implications of a mastectomy. I was twenty-six and was in a reasonably new relationship.

“The things that took me longer to come to terms with was not being able to breastfeed, knowing that my chest could be numb from my ribs to my lower neck and that even under the best circumstances reconstruction may not ever look the same as natural breasts.”

As a way of coping with the realities of having a double-mastectomy, Jaimee’s eight friends decided to throw her a party to say ‘goodbye’ to her boobs.

“I arrived at my friend’s house who was hosting, and all my friends were already there; they had set up all the games and food areas beautifully,” she said.

“We had cocktails and snacks until the astrologist arrived. She individually read tarot cards for us and we played some games.

“We carried on until evening when we lit the bonfire, and each burned one of my old bras which I wouldn’t need anymore.

“I wanted to keep it small and intimate with my best friends as it was such a personal thing for me to be celebrating.

“The party made me feel so special, having all of my best friends around me who love me and were helping me celebrate my breasts was so beautiful.

“I felt so supported on this day and I feel so lucky to have such amazing people around me. My friends have been there for me every step of the way and this party just showed how much they care.

“We had a boob cake, home-made sausage rolls and quiches, lots of lollies and cheese, crackers, a fruit salad and lots of cocktails.

“We laughed a lot and made jokes about my upcoming surgery, when I was cutting the boob cake, we laughed about me ‘performing my own surgery’.

“For me laughter and friends are invaluable. If I couldn’t laugh about this then I don’t think I would off got through it like I did.

“We spoke about the implications on my life and what my recovery was going to be like. The astrologist told me that everything was going to be fine and that I would never get cancer.

“This felt good however clearly was not going to change my mind about the upcoming surgery. This day was about empowering myself and playing an active role for my body and my future. Overall it was a very positive day and a day that I will never forget.

“For me my boob party was a physical manifestation of my twenty-six-year long relationship with my boobs. It represented celebrating the years that I had with them and journey they have taken with me.

“Your boobs are a body part like any other and it is as if you are amputating a limb. However, it’s a part of you that isn’t sick and currently has no problems.

“That’s the hard part to get your head around. I was choosing to take drastic action and remove a healthy part of my body that represented my femininity and my sexuality.

“I certainly was not aware of the risk that I was facing. I think in total I had checked my breasts only three times in my life and do not think I did it properly.

“I think breast cancer is something that we as women know about for our whole lives but maintain the mindset that it won’t be us.

“I know that was the case for me, even with my risk family I just deep down felt like it wouldn’t be me. I would tell women to be your own advocate and do the research.

“If you know there is a risk in your family of breast or ovarian cancer, investigate it and ask questions. There are so many amazing online forums with so much information, you don’t even have to leave your house.

“No-one is asking you to have a mastectomy or even to choose to get tested for a gene fault but education is power and the more you know the better.”

Couple Travel Around North and South America In A Renovated Van

Woman Lost Ten Stone Over Fear She Was Going To Die

This Tribe Faces The Risk Of Being Wiped Out Completely By...