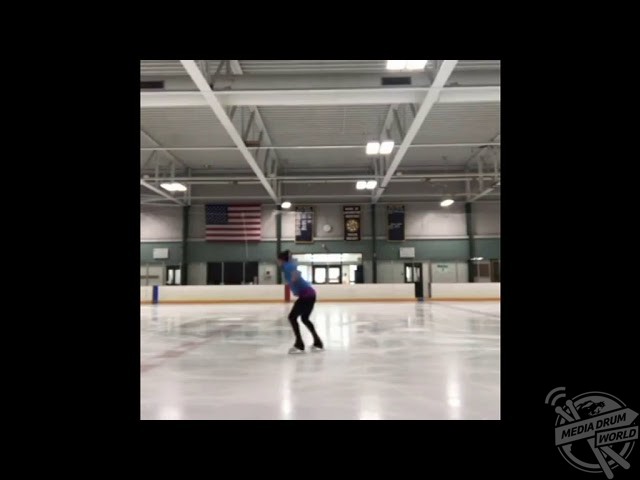 MEET THE figure skater whose BOWELS tied a KNOT around each other and who then required surgery to remove THREE-FEET of her INTESTINES which had gone SEPTIC and doctors declared ‘DEAD’ – and despite being told she only had TWENTY-FOUR HOURS to live has survived and become an OLYMPIAN FIGURE SKATER.

In June 2014, Olympian figure skater and coach, Aimee Buchanan (26), from Lexington, USA, felt a severe stomach-ache which made her struggle to sleep. The pain quickly escalated to the feeling of being stabbed repeatedly in her stomach.

She begged her mum to take her to the accident and emergency room (A&E), where doctors performed CT scans and ultrasounds. They then referred her to the children’s hospital for emergency surgery where they told her that she had 24-hours left to live since she first experienced the symptoms, with the surgery beginning 22 hours after her symptoms began.

It turned out her intestines had loosened from the membranes to the point where they tied a knot around each other and pulled tightly, causing an obstruction of her stomach. Three feet of her intestines were declared ‘dead’ by doctors due to sepsis and had to be removed as a result. Despite being given a life sentence of just 24-hours, she pulled through the surgery with flying colours.

However, she was devastated to learn from her doctors that due to the surgery and her condition, she had to give up her dream of figure skating until she was physically strong enough to return to the sport.

They told her it would take three to four months before she could resume skating, which left her heart-broken, but she never gave up and fought to skate sooner than they first expected. She has since won championships and even been a figure skating representative for Israel for the 2018 Olympics.

“I had just come back from Israel and had a bad stomach-ache. I didn’t think anything of it, so I took some ‘tums’ and tried to go to sleep. However, not only could I not fall asleep, but I couldn’t get comfortable,” Aimee said.

“I tried standing, laying on my back, on my stomach, foetal position etc and it kept getting worse. I felt like I was constantly being stabbed in the stomach.

“I finally went into my parents room and my mum knew how much I hated doctors, so she asked if I wanted to go to the emergency room, and if we were going to go we had to go ASAP because it was late at night.

“When I said yes, I want to go she knew this was serious but thought they’d give me something and I’d be better in a few hours.

“When we got to the closest hospital and they did CT scans, ultrasounds etc and started talking about surgery my mum had me transported via ambulance to Boston Children’s Hospital and we then became more aware this was life threatening.

“When I got to children’s hospital, they took some more tests and I was rushed into surgery that night. They told me I had twenty-four hours to live since the pain started and they operated twenty-two hours after my symptoms started.

“This condition is what happens when your intestines become loose from the membranes that they are attached to.

“For me since I had a complete obstruction, my intestines basically tied a knot around each other and pulled very tight to allow nothing to pass by as if you are tightening the laces on your shoes.

“This caused the digestion and everything in my stomach to become blocked, and my entire system became septic.

“Because it was septic, it became a fatal situation where I needed to have the entire part of my intestine removed immediately. So, they removed about three feet of my intestines which were completely dead.

“To this day the doctors don’t know what caused it or why it happened. This is a common occurrence for someone with Crohn’s Disease or Colon Cancer, but they checked and I have neither so it remains a mystery.

“When I was finally diagnosed in the hospital I was in excruciating pain; I remember going from test to test while the doctors tried to figure out what was wrong.

“No pain medicine was helping me, and I just remember crying a lot. From the time I was admitted in the ER to when they operated on me was about fifteen hours, and all I remember was being shuffled around the hospital, crying in pain, and not even being able to walk.”

If the intestine is completely blocked, it is a medical emergency needing immediate attention. Symptoms of an intestinal obstruction include severe stomach pain or cramping, vomiting, not being able to pass stool or gas and other signs of belly distress.

Aimee has grown up with a passion for figure skating and despite her medical condition and having taken a break for four months, she has managed to fulfil her goal of becoming an Olympian figure skater and is now a coach.

“When I had to stop skating, I was devastated. The doctors told me it would be three to four months before I could resume skating and I was heartbroken,” she said.

“Skating had been my whole life and I didn’t know what I would do without it. As soon as I had the strength to get out of bed myself, I started begging them to go back to the rink.

“I barely had the energy to go for a ten-minute walk, but I wanted nothing more than to skate. Unfortunately, I had to wait to build back strength and let the incision heal, so I was patient and waited anxiously for the doctor to give me the go ahead.

“I got back into skating by following my heart and staying true to myself and my dreams. When I had surgery, I was not ready to give up the sport, so I started from ground zero and worked extremely hard to get all my skills back and build my strength from the ground up.

“I’d say it took about a year to get back into athletic shape. I started slowing down with just basic stroking getting my balance and co-ordination back. Then we started some basic spins and eventually some basic jumps.

“Once my balance and strength were better, we moved on to difficult spins and triple jumps, but this was definitely a whole year process.

“Since then I became a national champion, a three-time European competitor and most importantly, an Olympian. I fought through all the pain and tough times to accomplish my goal of becoming an Olympian.

“At the time I simply felt scared, but now I feel proud of overcoming such adversity and rising back up to accomplish my lifelong goals and recover to live a healthy life.

“This condition has affected my life by teaching me about how important life is; I always took how precious life is for granted, but when I was so sick, I realised how great life really is.

“Never give up and never lose hope; I know that sounds corny, but it is so true. I had so many opportunities to call it quits and mope, but every day I tried to build some strength both mentally and physically to get back to skating and get back to my normal life.”

This Woman Had A Second Womb That Nearly Exploded

This Woman’s Toothache Turned Out To Be Rare Cancer