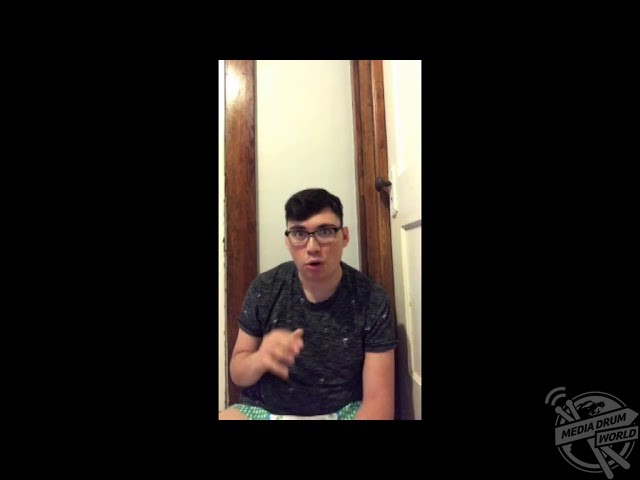 THIS  PROFESSOR endured abuse as a child that left him so emotionally scarred that he now lives part of his life as a THREE-YEAR-OLD to escape his turbulent past.

Teaching assistant and university student, Dillian Blake (21) from Ohio, USA, was just five years old when he first experienced physical and emotional abuse at the hands of a family member’s partner.

The abuse continued until he was 13 years old when they moved across the country, leaving him behind. The torment he went through made him feel like he had lost his childhood. He began to regress like a child in his behaviour, which caused him to shy away in public.

He didn’t feel comfortable to reveal his struggles until he discovered a website called Experience Projects in 2009. The website helped him build up a large following and he began to connect to other people who have experienced similar ordeals. This became a source of comfort for him. The shutting down of this website lead to him stumbling upon the adult baby diaper lovers (ABDL) community in October 2014.

It became his hobby to dress up as children between the ages of three and seven; it became like a safe space that made him feel secure. Despite graduating from high school and now studying at a university whilst also working as a teaching assistant at a high school, he will still dress up as a child in his spare time, sometimes even in public; wearing nappies and a pacifier.

“My birth mother had a boyfriend, who I thought was someone to look up to and aspire to be – but in reality, he wasn’t,” Dillian said.

“He would drink alcohol and every night he would come into my room and wake me up by punching me or hitting me in the head.

“During the day he would pin me down or start fighting me to ‘man me up’ by flicking lit cigarettes on me or hitting me because he didn’t like that I was more girly even as a kid.

“This would last up until I was in secondary school, when they both left to move across the country without ever thinking about her kids.

“I wouldn’t say anything to anyone until I was way older about the start of middle school for me which was about 2009.

“That’s when I discovered a website called Experience Projects, which is sadly no longer up. But my years on that site, I made a mass following on there of people who would give me advice about the feelings I felt; people who were going through the same struggles.

“I went on to find a new home; a place called Diaper Bois. There is where I truly felt secure; where people came together for the same reason.

“Even though I was a still underage at that time. I wanted to find a place I felt safe and welcome. The community has helped with deal with the trauma by giving me back my childhood even if it is just for a small bit.

“It lets me forget about the problems that come about in life, if I’m able to go into Little Space for an hour or two. Then I can come back to myself knowing I can handle these problems.

“The Adult Baby Diaper Lover community or also known as the ABDL community, is just adults who find comfort in wear nappies and adult size baby clothes and baby toys.

“Each person has their own reason of why they got into. I sometimes do go out in public while I have nappies on. I let them show over my shorts, so that if I bend down or my shirt comes up, they will be there.

“But my big role is; I don’t want to force anything on anyone. So, I never go extreme when I’m out in public. Because that can destroy and give our community the wrong name.”

Dillian explains that while there is a large community that understand his hobbies, there are also trolls who accuse them of being paedophiles, which is a myth he would like to dispel.

But while his hobby has at times negatively affected his dating life, he will not give it up.

“If I’m by myself I don’t get to really role play; I just put on a diaper and put a pacifier in and it just puts me at ease,” he said.

“If I’m with friends, with some I role play as more of a big brother. Where they are more of the baby, I’m more in charge of them.

“I think the most common reaction is someone asking me if that’s a diaper I have under my shorts and I mean I won’t lie; I tell them yes.

“If they ask why, I tell them I have to wear them, and they usually move on. But I won’t ever go extreme because it will hurt the community.

“A common misconception of our community is that we are ‘paedophiles’ – which isn’t true; we don’t find children sexually attractive.

“We find comfort and therapy in wearing diapers and baby stuff while able to regress back to younger ages without fear.

“What we do falls under the regression therapy which psychologists use to help with anxiety all the way to more complex mental health problems such as Post-Traumatic Stress Disorder (PTSD) by using physical and mental grounding methods.

“It controls a lot of who I date; I’ve learned to filter people by trying to figure out what kind of kinks they are into if any and I kind of play with that knowledge.

“I always try to push the boundaries so when they find out about my hobby, they won’t drop off the face of the earth. So, it has made it very hard overall in life to date.

“I haven’t had to deal with a lot of problems with being in this community besides when someone who you didn’t want to find out, finds out about your alter ego.

“You have to work those problems out like it’s a game of chess; knowing who you want to know and who you don’t but no matter how much you plan, you may have to change of your original game plan because you encounter problems you didn’t expect.

“My family doesn’t know about my hobby completely; they know I have the outfits and accessories and wear them, but they don’t know the full extent of it.

“Some of my friends know and they don’t care truly because they love me for who I am and that this made me who I am. They might not understand it, but they support me for who I am.

“I wear nappies out and about every day. Mostly when I’m at my house and in my room. But sometimes I will wear outside in public depending on how much I have on hand and if I’m in the mood to do that.

“My advice is to take a chance and ask questions; everyone has their own reasons of why they joined the community, but you have to be willing to take a chance if you want to express yourself.”