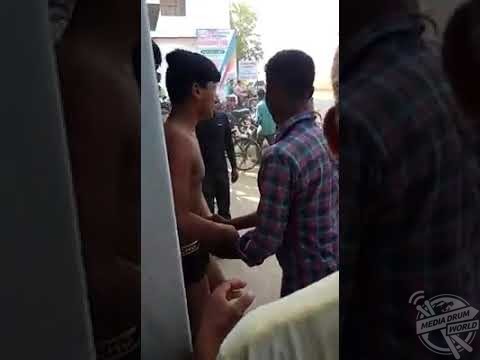 FIVE STUDENTS have been arrested after another died when they allegedly crushed him under their motorbikes and stripped and beat him.

Shocking video footage, taken by another student, shows Ranjit Singh stripped to his underwear as other pupils beat him with rods.

The victim is said to have gotten into a fight with his classmates because he tried to sit in the front row.

The five students who he had argued with then attacked Ranjit as he made his way to class on June 8.

The incident took place at a coaching institute in Deoria district in Utter Pradesh, India.

Ranjit lost consciousness after he was thrashed with rods. The attackers then allegedly ran their motor bikes over his stomach and head several times.

Ranjit was rushed to the district hospital but was announced dead on arrival by the doctors.

Locals caught one of the attackers and handed him over to the police.  Police have registered and are looking for four students who are absconding.

The manager of the coaching institute has also absconded.

Ranjit’s father works at a factory in Gujarat while the mother is ill and is in Delhi for treatment.

How to Buy and Where to Place a Buddha Statue?

Proven Strategies To Help Your Brand Succeed And Grow Even More

How to enjoy La Plagne ski resort to the max

What are the benefits of DevOps training?

You Don’t Have to Worry About Winter Coming in This Fortress...