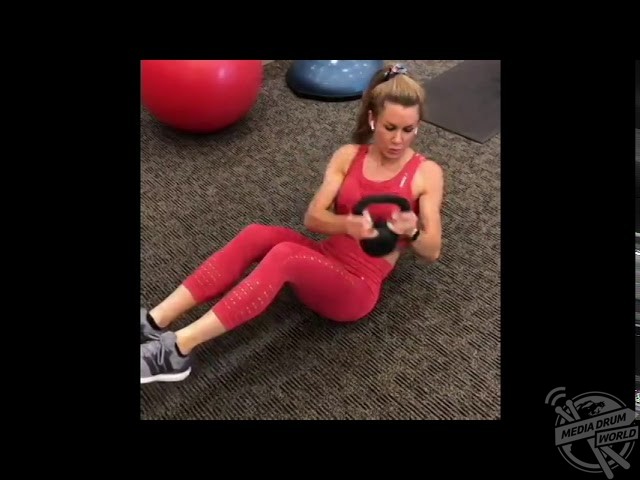 THIS FORTY-year-old mum-of-two says comfort eating and a hectic schedule made her HEAVIER THAN WHEN SHE WAS PREGNANT but has since turned this around and achieved the body of a TWENTY-YEAR-OLD by following a gruelling diet and hitting the gym FOUR TIMES A WEEK – and she claims anyone in their forties can do the same IF THEY PUT THE WORK IN.

Registered nurse Shannon Collins (40) from Indianapolis, USA, was working busy shifts and with her and her husband, Chris (41) owning a pizza restaurant, Shannon’s diet was fuelled by fatty food and sweets. When she was younger, Shannon had never worried about her weight because she’d been able to eat whatever she liked.

After having her daughters, Charlotte (12) and Ruby (10), Shannon didn’t lose her pregnancy weight, but instead found herself gaining weight. The stress of her job, being a mother and owning a business allowed Shannon to let go of herself. Shannon would comfort herself with food, but by 2015 she weighed 11st 6lb, which, for her 5ft 4in frame, was 2st 9lb heavier than her weight when she was nine months pregnant.

This was a turning point for Shannon, so her new year’s resolution for 2016 was to get in shape and take care of her body by paying attention to what she ate. At first, Shannon tried to follow a low carb diet but didn’t track anything or measure her diet through numbers and targets. Shannon ate mostly food which was high in protein and vegetables, while cutting out pasta, bread, crisps and sweets.

Within three months, Shannon lost seven pounds and a colleague complemented her on the weight loss. However, her diet wasn’t sustainable, and Shannon found herself snacking and craving sweets regularly. By 2018, her diet was almost non-existent once again.

In August 2018, after realising she needed a change, Shannon read about macro counting on Instagram and decided to try it herself. Despite her initial fears of counting macros, Shannon now weighs 9st 4lb and has gone from a UK size 12 to a size 6, and feels the best she has ever felt, despite being a mother-of-two at 40.

Shannon wants to show others that they can achieve their perfect body at any age, as she says that a 40-year-old can look 20 again.

“I’ve always had a small frame, so I never had to worry about my weight until my thirties,” said Shannon.

“My bad habits continued after having kids and caught up with me in my thirties. Life as a parent, being a restaurant owner and working as a nurse had me comforting myself in food.

“After having my daughters, I never fully lost the pregnancy weight and I was slowly gaining weight each year until I hit my highest in 2015. I had let myself go and was just eating anything.

“The stress of my job, owning a pizza restaurant with Chris, who was working all the time, this all led me to eat whatever was convenient. I was eating fast food, greasy meals and ice cream constantly. We also ate out a lot because we are so busy, and I love pizza, chips and donuts.

“In 2015, I was 2st 9lb heavier than I had been while nine months pregnant, and I wasn’t even pregnant at this point. I knew it was time to change and I could no longer eat whatever I wanted anymore.

“I felt terrible about myself and I couldn’t believe I’d allowed it to spiral so out of control. I was confused because I tried to work out during this time, but I did cardio group classes and didn’t pay any attention to diet.

“I couldn’t believe how big I was, so my new year’s resolution for 2016 was to get serious about being healthy. I ate what I thought was low carb, so no pasta, bread, crisps or sweets. But I didn’t track anything and just tried to eat protein, vegetables, fats and eat only when I was hungry.

“I started working out four times a week, doing cardio and a bit of weights, which I was nervous to try but I had read that weights helped fat loss.

“About three months into my new regime, a colleague asked if I was losing weight and I was thrilled. Between 2016 and 2018, I lost about two stone which I was so pleased about.

“But by August 2018, my diet had become relaxed and I was eating all sorts of sweets, which clearly aren’t low carb. I decided I needed a fresh change, that’s when I heard about macro counting on Instagram.”

After losing the weight she had gained during her thirties, Shannon wanted to tone her newfound figure, and despite her initial fears of counting macros, she has loved the results she’s seen and feels fitter than she’s ever been before.

Through sharing her journey on Instagram, @thegymnurse, Shannon hopes to show others that age shouldn’t be a factor which prevents them from getting fit and feeling strong.

“At first, I was scared, and I didn’t think I had the discipline to track all my food and eat more carbs and less fats,” said Shannon.

“I began counting macros in August 2018, after seeing a post about it on Instagram. I’ve had so much success with following this lifestyle. I’ve gone from wearing a size 12 to a size 6 in trousers, and a large in tops to an extra small.

“Diet is so important because you can spend hours in the gym but if you don’t eat with a calorie deficit, you will never lose weight.

“Eating in such a balanced way and knowing the right amount of calories my body needs, it’s enabled my body to respond well. I’m so proud of myself and I feel like I look the best I ever have in my entire life.

“Just because you’re a mum in your forties or fifties, it doesn’t mean your body can’t look like you’re in your twenties, maybe even better.”

Fashion Enthusiast Can’t Sweat And Has No Teeth Due To Rare...