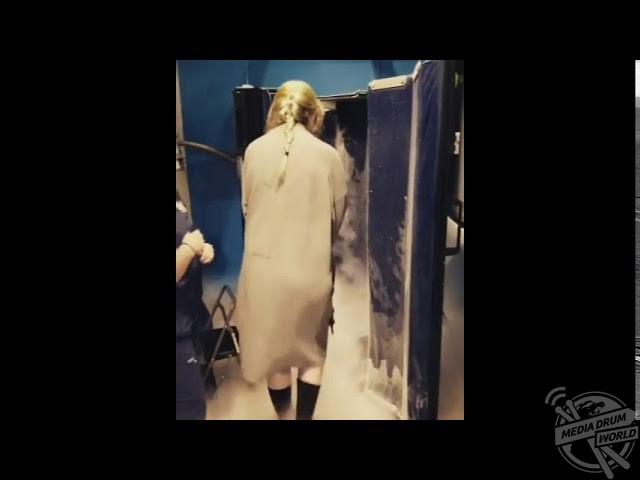 THIS WOMAN was struck by a BALL in the back of her head which triggered a headache which hasn’t gone in EIGHT YEARS – and she’s even been hospitalised after being triggered by light, noise and WEATHER CHANGES.

Ashley Rogers (23) from Houston, Texas, USA, played volleyball and softball from a young age, but in January 2011, while on the way to volleyball practice she experienced a terrible headache, which lasted for the next week.

The headache returned on March 17 and lasted for four days until it started to recede on March 21, 2011. Unfortunately, Ashley suffered a blow to the back of her head from a softball on the same day her head was getting better, which reignited her headache and it has never gone away since.#

Ashley explains her pain levels as a usual day being a seven out of 10 for pain, however on days when it is triggered and gets worse it becomes a level 10 and she has been forced to go to the hospital when the pain is too much for her to manage.

There are certain triggers which can affect Ashley’s pain, these include loud noise, bright light, lack of sleep, stress, weather changes, menstrual cycles and sudden movement. During a flare up, Ashley will hibernate in her room where she can block out all light and sound. She usually lies down with an ice pack and pain medication as she waits for it to soothe.

Ashley has not had a headache-free day in the last eight years, which has taken its toll on her life drastically. The headache stops her from playing sports, exercising, reading, writing and going out with friends. Despite the intense pain that Ashley’s invisible illness puts her through, it can be difficult for some people to empathise as they can’t physically see anything wrong with her.

“In January 2011 I was headed to volleyball practice when I said the three words that seem to have changed my life since, ‘my head hurts’,” said Ashley.

“The headache lasted for about a week before fading away. It came back in March that same year and was almost gone four days later until I suffered a blow to the back of my head by an overthrown softball.

“Since that day, over eight years ago, I have had a headache every day. I say headache because on an average day, pain-wise, it’s a seven on the pain scale and seems to be just be a resting pain. When it flares up, I’m crippled by a severe migraine and I’ve ended up in hospital.

“At first, I didn’t think much of it, I thought it was just a simple headache that would fade. I was naive and didn’t put much thought into it. It was more frustrating than anything. It was spring break and it was supposed to be a relaxing week away from school, but I couldn’t relax due to the headache.

“The headache was almost gone by the time I went back to school after spring break on the twenty-first of March. The head injury got reignited after I was hit in the head, but it also intensified exponentially, and it’s never left since.

“Back then it was minor compared to what I experience now. At the time, I thought it was just an annoying headache, so I don’t remember much of it, other than it being quite distracting from school. Some days I have lower pain levels, while some are much higher ones, but never any headache-free days.

“They have a medication protocol that they use for when migraine patients come into the hospital, and they used several of the medications on me to help my pain.

“I have been in and out of doctor’s offices, hospitals, and specialty clinics with little to no answers as to why I am in excruciating pain. I have been diagnosed with multiple chronic illnesses since, which explain a multitude of other symptoms I have suffered from, such as coeliac disease, postural orthostatic tachycardia syndrome (POTS), dysmenorrhea, fibromyalgia and lupus, just to name a few.

“We aren’t certain what my condition is, but we believe I have an intractable migraine, a migraine that lasts longer than 72 hours. This is notorious to treat because it doesn’t respond to treatments like a migraine normally would.

“Living with chronic pain is something that I would never wish on my worst enemy. People constantly ask me what’s it like, and I have trouble finding words to explain how there’s a war raging underneath my skin, knowing they’ll never fully understand without experiencing it themselves.”

Ashley is thankful for her supportive family and boyfriend who continue to be understanding of her condition. Ashley refused to let her continuous headache stop her from achieving her goals, and in 2017 she graduated from Oklahoma Baptist University with a degree in Early Childhood and Elementary Education.

“There are many ways to determine whether it will be a good or a hard day. They’re called triggers,” said Ashley.

“Triggers which affect me include loud noises, strong light, smells – basically any sense – lack of sleep, tight neck muscles, stress and pressure change. If I don’t wash my hair within 48 hours, my scalp starts to hurt and that is another trigger. There are also long days, sudden movements, weather shifts, such as rain, full moons and periods.

“If any of these triggers bother me, I can tell it will be a hard day. I’m pretty good at determining how the day will go in terms of my pain as I’ve become very in tune with my body.

“Depending on what has triggered the pain, I try to get away from the trigger as soon as I can. My usual flare up includes me hibernating in my room where I can avoid all light as I switch the lights off and close the blackout curtains. I lay my head on an ice pack, since ice is usually one of the only things that seem to help, and I take some pain medication.

“I’ve come to be good friends on social media with others who deal with chronic illnesses and they help me through.

“My closest friends and my boyfriend are extremely understanding, and my family is an amazing support system. Not everyone is as helpful, but it’s hard for someone to understand being in constant pain or having multiple chronic illnesses when they haven’t personally experienced it.

“I would love for people to understand that, despite hard situations and overwhelming obstacles, it doesn’t mean that life is terrible and not worth living. Chronic conditions are rough and real. Those of us dealing with chronic illnesses exist and we deserve to be acknowledged and believed. Not all disabilities are visible.”

This Polyamorous Family Are Raising Their Baby As Gender-Neutral