Media Drum World
Home MDWfeatures The Poly-Posal That Means This Pro-Love Triad Are Now Engaged To Be... 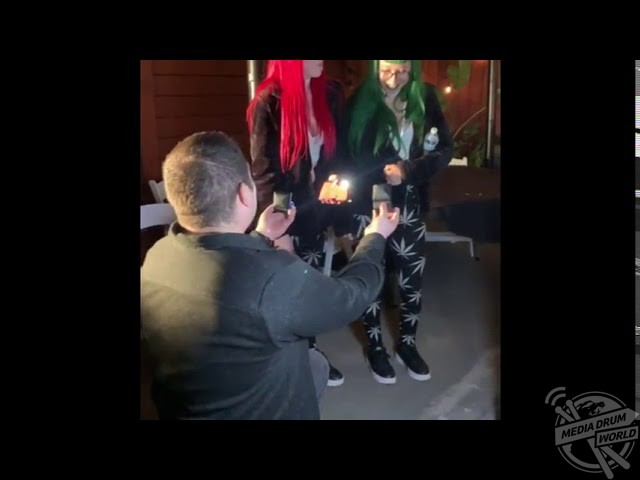 MEET THE polyamorous triad who were once in an OPEN RELATIONSHIP until one POPPED THE QUESTION and are now planning to start a family together.

Marketing director, Jimmy Silva (34) and president, ChaCha Sahagun (31) from California, USA, have been high school sweethearts since April 2009 where they met through mutual friends and instantly fell for each other.

Three years later at a business event, they both met president, Summer Pelletier (25) and fell for her. They agreed to form a polyamorous triad in December 2012, however, for years they were still experimenting and were open to seeing other women as a triad.

It wasn’t until 2018 when Summer and ChaCha began talking about wanting babies and settling down together, that they became committed as a triad.

With April 2019 being Jimmy and ChaCha’s 10-year anniversary, he decided to propose to both women with two rings near to midnight that day to combine their anniversary as one.

They have now discussed the possibility of setting their wedding date from a year from now on the same date as the proposal.

“In the last year, the girls have been talking a lot about babies and us growing old together. I had planned a trip to Cancun to celebrate my 10-year anniversary with ChaCha,” Jimmy said.

“I started thinking about how happy these two girls make me; I planned to propose before we went on the trip. I went to the engagement store and bought a diamond and had it cut into two.

“Both rings are made from the same diamond stone. We had a very busy week before leaving for Cancun. On the Friday we had an event in Ventura county, Saturday a festival and Sunday another event where we live.

“My anniversary with ChaCha landed on April 20. So, I proposed close to midnight so our new anniversary could be combined as one.

“We are still very open in our triad but we believe it would be very difficult for any person to rise up to the level we are in as a triad, but we are still open to the idea.

“We love ‘love’. We are free spirits, but we are also sensitive beings, it would take a free-spirited, humble, and equally driven person to mesh well in our family, but in the meantime, we are just fooling around and enjoying life with like-minded people.

“I don’t think we’ve changed all that much. Still the same triad, we grow more dedicated and in love daily. We feed the animals, make breakfast, go to the gym, fold laundry, all together.

“We have set a lot of goals and make more every day. We are planning a big festival, we want to travel the world, meet beautiful people, maybe one day settle down, get married and have babies, but for now, we are really enjoying the ride.

“We’ve talked about maybe setting the date a year from now, our date would be April 20, 2020, but were not in a rush. We are so stoked to be engaged. We are enjoying every step of the way.”

ChaCha and Summer both say that they were nervous and shocked by the proposal and are very happy.

“I was so happy my stomach hurt instantly I could not keep my eyes from Jimmy, listening to every single word coming out of his mouth,” ChaCha said.

“Watching his every move he was so nervous the sweat in his body seemed like a big wave of water splashed on him.

“His smile was so different – I’ve never witnessed such bliss in his voice as he declared his love and devotion for us.

“As I looked around the whole room in a flash second the energy in the room shifted all the flashing lights sparkled with all the excitement as Jimmy said the big words ‘will you marry me’.

“He put the microphone down and got on one knee and we said yes. I was so excited I grabbed the ring out of the beautifully lit up box before Summer told Jimmy to put it on me.

“This was a big surprise I never expected to get married and proposed to in front of so many people. We have discussed being together, but marriage was not something we planned on or established.”

Summer describes her reaction to the big proposal.

“I was so surprised, and my body immediately went into shock. The good kind, like a happy shock,” Summer said.

“I was shaking from head to toe, naturally, I looked at ChaCha for approval, and I was overwhelmed with happiness as we both just shook our heads and said yes.

“I was not expecting this, and I am normally over observant and snoopy, so I’m surprised I couldn’t foresee the proposal.

“I am honoured to spend the rest of my life with these two amazing people. We talk about marriage and babies when we get really happy or tipsy, but I really didn’t see it coming.”

While Jimmy and ChaCha’s families are traditional, their love and affection has warmed them to their relationship, and they have each given their blessings.

“My mum is very traditional, and she has slowly learned to be more accepting but it’s still rocky. She just doesn’t understand how it works and doesn’t like talking about it,” Jimmy said.

“On our last trip I sent her a picture of us three and she said she hopes we have fun. This was the first time I sent her a poly picture.

“My dad and oldest sister are very accepting to the whole situation. My younger sister is in the middle about the whole relationship but doesn’t really comment too much about it.”

ChaCha says that while her family are traditional, they are also open minded and have been accepting of their relationship and engagement.

“My family is both traditional but open to new ideas and recently I sat down with them and explained our love, relationship and future plans,” she said.

“All my parents want is to be included and they were happy when I shared the good news with them. They offered their unconditional love, support and blessings.”

Summer’s family have always been open minded and have known about their relationship since the beginning.

“My family, I think, is the most open. My immediate family have always known about my polyamorous lifestyle whereas my extended family is becoming more aware since the proposal announcement,” she said.

“We are not very ‘in your face’ about our relationship in public or around family out of respect but I’ve noticed that surprisingly, the more we display affection, and talk about our dynamics, the less people care. It’s becoming a very normal part of my life and I love it.”

Jimmy says that they have received many positive messages on social media since their engagements, including some saying that their love inspires them.

“So far it has been a very positive reaction; with more questions and how we plan to get married in the USA as a triad,” he said.

“We get messages on Instagram that our love has inspired people to hit the market and start dating. I know we’ve given a lot of inspiration for threesomes and having fun in the bedroom to friends, followers, and even family. I think even the thought is exciting.

“Polyamorous relationships are not for everyone. Imagine how hard it is to find someone to connect with, now multiply that times three.

“Throughout the years we’ve noticed our unique strength and perseverance is what has kept us together and very happy against all odds.

“We don’t get jealous, we’re able to come up with solutions faster than average, we are surviving as LA entrepreneurs in 2019 (which is not easy), and without any doubt we are extremely happy to be sharing our lives together.

“While our dynamic has proved to not be for everyone, in comparison, we really are just like any other happy monogamous or gay couple, just multiplied.”