Media Drum World
Home MDWfeatures Midwife Said She Was ‘Gutted’ For This Joyous Mother After Seeing Her... 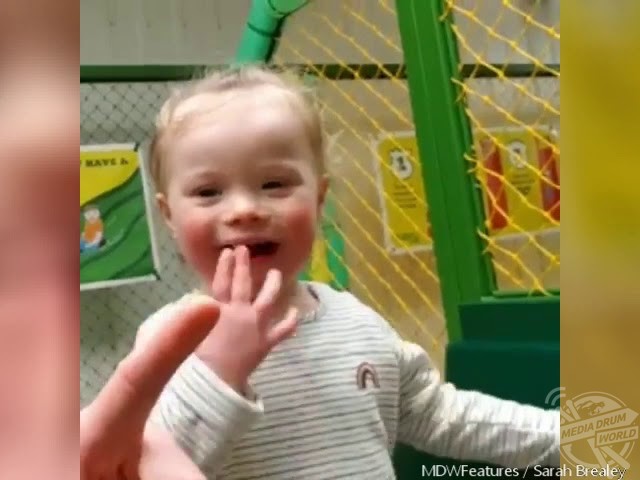 THIS DOTING MUM is showing off her toddler with Down’s Syndrome on social media and has branded her an ‘inspiration’, despite a midwife telling her she was ‘GUTTED’ for her.

Office manager, Sarah Brealey (34) from Surrey, UK, went into labour in August 2016 and gave birth to her daughter, Sophie (now two-and-a-half-years-old), but despite the fact that her pregnancy went smoothly, Sophie struggled to breathe when she was born.

She was taken away by doctors for oxygen, but Sarah’s husband, Scott, was the first who noticed her facial features looked different. She was shortly diagnosed with Down’s Syndrome (DS), also known as trisomy 21, a genetic condition that typically causes some level of learning disability and some physical characteristics.

Sarah discovered after doing some research that children with Down’s syndrome can sometimes have a delay in speech acquisition, as well as regularly having floppy muscles, including the tongue, which makes it difficult for them to form words.

She then became very interested in Makaton, a type of sign language used by people who have no hearing impairment but have trouble communicating through speech. Sophie began using this method since she was six months old and Sarah now claims that she is less frustrated and feels more understood by people around her.

“I was thirty-one when I happily fell pregnant with Sophie. The pregnancy went smoothly, and the labour was just as I had planned it,” Sarah said.

“Upon delivery Sophie was struggling to breathe, so she was taken away for some oxygen. However, we weren’t expecting the paediatrician to come back and tell us Sophie had Down’s syndrome.

“Her breathing was fine, but she was now struggling to feed, so we ended up in hospital for ten days before we were allowed home. In that time, we did so much research about DS that Google became a scary place.

“I was shocked, but relieved. She had been taken away with breathing troubles so when the midwife came back with Sophie and informed us that the doctor would need to speak to us, initially I feared the worst.

“DS was something I could deal with. I knew very little about it, but I’ve always been up for a bit of learning.

“My husband noticed first, when she was brought back to us after she needed some help breathing upon delivery; he noticed that her facial features looked different. She must have been about five minutes old.

“I had learnt that children with DS can sometimes struggle with speech, so using sign to support speech can benefit the lines of communication.

“Often people with DS are more visual learners too, so this works great with signing. As the tongue is a muscle, and people with DS can have more lax muscles, this, along with a learning disability, can affect speech clarity.

“We decided to attend Sing & Sign classes weekly from when Sophie was six-months-old, and this is where I learnt most of the signs we still use today.

“As I went back to work, we had to stop going to the classes after Sophie turned one, but the basics I had learnt we were using at home consistently in the hope that one day it would sink in.

“I then attended a two-day signing course and learnt a lot of words that would take us forward and help as Sophie got older, and our signing vocab has just grown from there.

“Mr Tumble, and a lot more of the kid’s TV shows nowadays, use basic signs as well as speech, so that helped me pick them up and helped for Sophie to see them being used in context too.”

Despite a midwife saying she was ‘gutted’ for them regarding Sophie’s DS diagnosis, Sarah insists that Sophie is her inspiration.

She says that now that Sophie is an expert at signing, she uses this method everywhere they go and has even encouraged strangers who have interacted with her to learn Makaton.

“As Sophie has no hearing impairments, we use both sign and speech to communicate. She understands everything that is said to her, and we use signs alongside our language to double the methods of communication,” she said.

“She will often sign back, whilst trying to say the words she wants. This way she is not frustrated, as she is understood, but she is also working on acquiring the language skills too.

“I don’t think that signing has necessarily helped with DS, but it has helped with the communication we all have with her, which means she is understood and isn’t frustrated.

“I think it has helped other people appreciate the skill involved in communicating in different way. We have a lot of people, from friends to supermarket assistants and waitresses, ask how to sign back at her.

“So, I think it’s a very positive thing that she’s helping to promote the benefits of other methods of communication.

“Sophie always has been and always will be loved beyond words. Her tenacity and ability to learn something new never ceases to amaze me.

“She continues to prove people wrong by achieving where people may have doubted her. She’s my inspiration.

“We started her Instagram account when she was two-months-old. We’re very proud of Sophie and wanted to show her off to the world, but it was also to enable us to connect with other families who have children with DS.

“When Sophie was first born, one of the midwives said she was ‘gutted’ for us, and one of our neighbours said he was ‘so sorry’ but we just told them not to be, we weren’t, we were over the moon.

“Like any parents, we often think about Sophie’s future, but we have learnt not to look too far ahead as no one knows what will happen to any of us. She’s taught us to live very much in the moment and appreciate the here and now.

“For parents who have just had a child with DS, just take the time to get to know your baby. Enjoy those precious moments.

“Try not to worry about the future or what other people might think. It’s OK to be afraid of the unknown, but every single child in the world is different, so get to know yours. They are an individual, not a diagnosis.”

This Couple Had A Gas Mask Themed Wedding During Coronavirus Pandemic

This Woman Was Left With Sight Loss After Using Steroid Creams

These Eerie Lunatic Asylum Remains Have Been Slowly Decaying For 190...