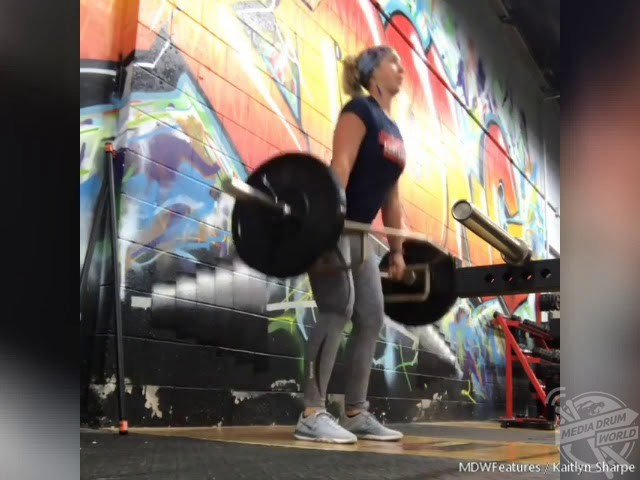 THIS AVID SKATER walked with a LIMP which people thought was her trying to be SWAG until she was later diagnosed with hip dysplasia, requiring a double hip replacement at just THIRTY – but all the available resources only catered to the ELDERLY.

Entrepreneur, Kaitlyn Sharpe (32) from Ontario, Canada was a keen skater since she was young, even representing her country at the age of 17 in a synchronised skating competition, however what no one knew at that point was that Kaitlyn suffered with severe hip dysplasia.

Hip dysplasia refers to the hip socket being too shallow to support the ball of the hip joint, causing the hip to dislocate.

Skating maintained Kaitlyn’s flexibility and she built up strength in her legs, which she later learnt was to compensate for the weakness in her hips. Since her teens, Kaitlyn woke up feeling sore and stiff, and even walked with a limp which people thought was her ‘swagger’.

Physiotherapists tried to relieve Kaitlyn’s pain but there was never a great improvement. By her mid-twenties, Kaitlyn was forced to give up skating because the pain had grown too much and she could no longer do simple skills, such as a spiral as she couldn’t lift her leg.

In 2015, an athletic therapist recommended that Kaitlyn have an X-ray on her hips which located the source of her problems, and Kaitlyn was diagnosed with severe hip dysplasia. After searching for a solution, Kaitlyn was told by a surgeon that her only option was to have a bilateral hip replacement which filled her with fear as she was only 29, but the prospect of walking without pain made her hopeful.

In October 2016 Kaitlyn had her right hip replaced as well as a bone graft to create a hip joint as her hips had deteriorated so much. Then in May 2017 her left hip was replaced, complete with another bone graft.

Kaitlyn used to joke about feeling elderly, but she was disappointed in the lack of resources available for young people going through hip dysplasia. Now, she makes light of being the youngest person in airport security queues designated for people with metal replacements.

“I was born with severe hip dysplasia, but it wasn’t diagnosed until 28,” said Kaitlyn.

“I don’t recall a time that I didn’t have something wrong with my hips. I always had a ‘swagger’ or a limp, even when I was younger, and it got much worse over time.

“It wasn’t until my teens when I felt more of the physical limitations that come with hip dysplasia. My hips were always sore, stiff, and they’d pop.

“I tried to work with physiotherapists, but since I hadn’t been diagnosed with hip dysplasia by then, many of them didn’t know what to do with me. I was active and flexible due to skating, so they couldn’t figure out what was bothering me. I didn’t feel like my pain was understood, and therefore not believed.

“At some point in my life I broke a chip off the top of my left hip, which is visible in my pre-surgery X-rays, but I don’t know when that happened.

“By the time I got to university, my hip problem was worse, and it continued to get worse as the years passed. I stopped skating in my mid-twenties because I would lose power in my legs and couldn’t do simple things.

“In university I worked with physiotherapists, but they never provided me with any relief. They would move my legs around and tell me I had flexible ligaments, which didn’t help solve the problem with my pain.

“In my mid-twenties, I started to work with athletic therapists, and they had a really good understanding of what might be causing the pain. They were the ones who requested X-rays and I was subsequently diagnosed with hip dysplasia.

“Having to wait a surgeon see me was very hard, as I was passed over by many in my area because I was either too young, or too complicated for them to deal with.

“My orthopaedic surgeon told me a hip replacement was the only option. It came as a complete surprise as I was only 29. Before that, I had only joked that I would require replacements before any of my friends, figuring that would mean in my fifties.”

Kaitlyn underwent her first hip replacement in October 2016 on her right hip, and because her hips were worse than doctors thought, she required a bone graft to construct a hip joint. Her left hip was operated on in May 2017 and a bone graft was necessary again.

Kaitlyn hopes to reshape the stereotype that hip replacements are solely for the elderly, and she documented her story on Instagram to connect with other young people having hip surgery.

“I had never heard of someone having hip replacements at such a young age. The resources available only related to older individuals, like grandparents, and how they would cope with life after surgery. Not an active woman who still wanted children,” said Kaitlyn.

“Ultimately, I was in a position where I just needed to get out of pain and the fears were pushed aside because of this. This was the only option I had.

“After the first hip replacement, my surgeon told me that the right hip was worse than they anticipated. They were surprised at how well I walked and how strong I was in the legs. They didn’t anticipate my hip joints would be as bad as they were.

“In the first surgery, due to the bad state of my hips, they had to put the bone grafts in so there was enough bone to secure the replacement to.

“I went into recovery feeling blind, mainly because all the resources were meant for much older individuals so I wasn’t sure if I would recover differently.

“I was on crutches for six weeks due to the bone graft, and only 50 per cent weight-bearing. For 12 weeks I couldn’t do a 90-degree bend, no twisting and no leg crossing.

“After the second replacement, I knew what to expect and it made me restless at times. During this recovery I had days where I was antsy to get moving because I suddenly felt a million times better, however I had to remind myself that I still needed to heal from the surgery.

“I was on crutches again for six weeks, but the remaining limitations only lasted six weeks, instead of 12.

“I often get funny looks or comments, but I try to keep a positive outlook when people say things, as I know they say it more out of surprise than anything.

“The airport is a fun one. It’s a great conversation starter when standing in a security line with all the ‘older’ individuals at the airport who have replacements or implants.

“I also get stares at the beach when I’m in a bathing suit and people can see my scars. I just own it, it’s a part of who I am and I’m not ashamed.

“The surgery has completely changed my life. I’m able to get things done and get through the day without having to sit down for a couple hours or take medication. I have seen my energy levels jump up as my body is no longer putting all its energy towards pain management.

“Just because you are younger than normal, it doesn’t mean the pain isn’t real or that hip replacements aren’t necessary. Life can improve after hip replacements and even though the process is scary, the change it makes will make it all worth it.”