Media Drum World
Home MDWfeatures The Super-Fit Model Whose Career Was Put On Ice When A Sore... 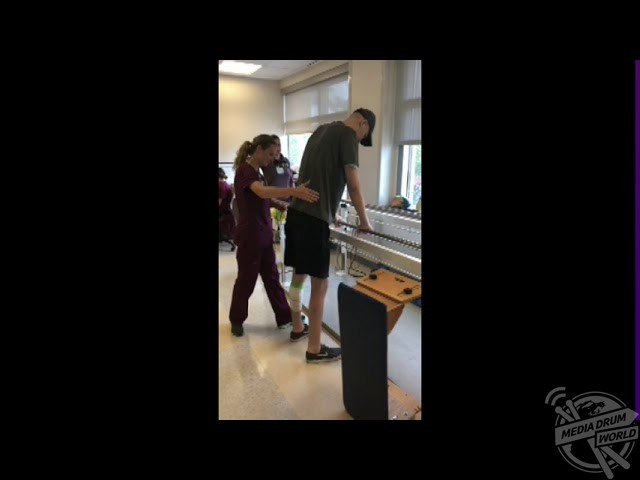 THIS GYM enthusiast was in the shape of his life before a sore throat turned out to be LEUKAEMIA and his body nearly shut down, going from working out DAILY to being confined to a HOSPITAL BED and then having to learn to walk again.

Student William Yank (21) from Indiana, USA, was the picture of health as he woke up at five am every morning to work out at the gym, transforming his lean six-foot-seven frame into a more muscular shape.

After the gym, William would focus on studying throughout the day, followed by extracurricular activities, such as track running. William’s regimented lifestyle enabled him to grow stronger and fitter, with his health becoming his main priority. In 2016, William started modelling and had photographers reach out to him before later signing with an agency.

However, in June 2018, William started experiencing a sore throat, and after a few days he decided to get it checked out. A doctor at urgent care said it was just glandular fever, or mono as it’s also known.

William’s roommate could see that his condition was getting worse and insisted that he go to the hospital for a second opinion. Within hours of arriving at the hospital, William was diagnosed with septic shock, organ failure and acute lymphoblastic leukaemia (ALL).

The diagnosis was much to William’s shock as he was in such great physical shape and couldn’t believe that after years of looking after himself, his body was now shutting down.

The next month was spent confined to a hospital bed, as William fought for his life. When William first caught sight of himself in the mirror, he couldn’t even recognise his own body and cried at what he saw. William went from 13st 2lb of muscle to just 10st 7lb as he watched his body morphing before his eyes.

“When I was in school, I was the tall skinny kid because I was and still am really tall, which made putting on muscle difficult,” said William.

“Over the course of three years during university, I grew into my body and became much stronger. I was on top of my game in that sense.

“I began to regiment my life by scheduling everything. I woke up at five am every day and went to the gym first thing. Following that, I went to all my classes, worked on any extracurriculars, and hopped into bed with a book by nine pm each night.

“I got into modelling during university when I had photographers reach out online and ask if I was interested in doing a shoot. They could build their portfolios and I would have fun.

“It quickly turned into something I thoroughly enjoyed, and it presented me with a casting opportunity with an agency in Indiana. Ultimately, I signed and am still modelling for them now.

“I experienced the sore throat for two days before I went to the urgent care clinic on the night of June 20, 2018, when I was diagnosed with mono. The sore throat was unusually bad and swollen, so I knew I needed to get it checked out.

“Honestly, I believed it was mono. I know friends who’ve had it before, so I was prepared to fight it off and get back to normal. But that obviously ended up not being the case.

“My roommate knew I was rambling and couldn’t speak properly, so he forced me to go to the hospital straight away. A few hours later, I was diagnosed with septic shock, organ failure, and acute lymphoblastic leukaemia. This simply means the leukaemia comes on extremely quickly without warning.

“Upon hearing the doctor’s diagnosis, I was in disbelief. There was no way this was true. I was in amazing health. I worked out all the time, ate well, took my vitamins, I couldn’t get sick. I had treated my body like a temple for the past four years. How could my body betray me? How could everything I had worked for to ensure I remained in good health, suddenly fail me?

“Shortly after reaching the hospital, my body was fighting and beginning to shut down. I have very little memory of what actual events occurred for the next week.

“I was given loads of antibiotics to try and stop the staph infection from completely shutting down my organs. Then I was given fluids to rehydrate and they immediately started chemotherapy.

“Losing my hair was a struggle of course. Being a model prior, the job is based on physical image. Watching the outside of my body morph and change with the treatment was a definite shock.

“During my first week of treatment at Johns Hopkins, I had my step-father shave my head because I didn’t want to watch it fall out. Today, it’s grown back just as thick as before, which I’m incredibly grateful for.

“In December I received CAR-T therapy which put me into remission in January. CAR-T therapy involved genetically modifying receptor proteins on my cells to attack the leukaemia cells. It’s a very new therapy but has a promising future.”

Going from such great health to suddenly fighting for his life was devastating for William, who had to learn to walk again after two weeks of being in hospital. Recovery was difficult, but William has come out of it with a positive frame of mind and sees his experience as a trauma he managed to overcome.

As of January 10, 2019, William is officially in remission and he is regaining his health, however he admits that battling leukaemia has shown him the importance of putting aside egos to love those who support us.

“I learned to walk again around two weeks after being in the hospital. When I woke up from the period when I was in a daze, I was able to try and reconnect with my body and its nerves, but still needed a lot of help,” said William.

“Now, I am free and considered cancer free. Every three months I go back to Baltimore for a bone marrow test to check my status. Each month I have an IVIG infusion which simply infuses cells that the CAR-T cells also kill which aren’t leukaemia.

“Recovery was long and slow, and it required a lot of patience. The most difficult element was having to be patient and watching everyone around me live their lives while I was unable.

“But the experience has shown me how to face trauma and hardship, as well as how to love. It’s so important to value your own time and the life you have.”