Media Drum World
Home MDWfeatures Fat Shamed By Her Family: The Mother Who Made An Incredible Fitness... 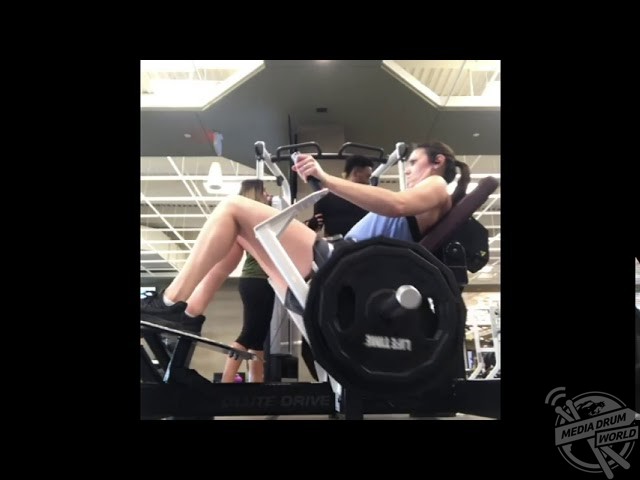 THIS MUM was FAT SHAMED by her own family who cruelly labelled her a “FAT-ASS” for being overweight but is now having the last laugh after losing an impressive six-stone.

Business owner, Bailey Bryan (28), from Texas, USA, had an unhealthy childhood and was never taught anything about nutrition or how to eat well.

At 15st 10Ib and UK size 20 to 22, she was constantly criticised by her family for her size and they would even shout at her when she was eating. The judgement from her family caused Bailey to comfort eat more which resulted in her hating herself and she was unable to look at her reflection in the mirror.

In 2013, Bailey gave birth to her first son, Harrison (5) and her weight began to affect her ability to keep up with him, she felt constantly tired. She was at her heaviest when Harrison was nearly two-years-old. But it wasn’t until 2016 when she had her second son, Hudson (2) that she had a wake-up call.

Bailey was too embarrassed to join a gym, so she bought a Beachbody programme called Body Beast which allowed her to work out at home and she began calorie-counting using My Fitness Pal. The combination of adding exercise to her routine and changing the food she was eating helped her shrink to a healthy 10st and UK size eight to 10.

She says she now feels great, worthy and pretty and can wear whatever she likes without feeling insecure.

“My family, growing up, have all had problems with healthy eating and exercise habits; most of the women on my dad’s side of the family are overweight, if not severely overweight,” Bailey said.

“One of the biggest challenges I’ve faced as an adult is trying to eat healthily as we didn’t do it growing up.

“There were maybe two vegetables I would eat; we simply weren’t taught these things or shown good habits to follow.

“My sister and I would alternate; I think one of us was always larger and the other one thinner, but we were never both thin at the same time.

“When we were overweight instead of guidance, we received yelling from family and comments about our weight and how we needed to fix it, but never how.

“The negativity from my household growing up is a huge challenge I’ve faced as an adult and one of my biggest accomplishments has been to finally block that out and move on. I no longer feel imprisoned by these comments.

“I would eat my feelings, eat to make myself feel better when I was upset. I hated myself, I couldn’t even look at myself in the mirror. I was disgusted and I rarely took pictures or socialised. I was embarrassed.

“The looks I received when going out made me feel embarrassed. I had comments from my family about how I was a ‘fat-ass’ and needed to stop eating. They would yell at me about eating sometimes as well.”

Her struggle with everyday tasks would make her feel tired and out-of-breath and having two sons magnified this for her.

While before she wouldn’t exercise at all, Bailey now works out six days a week for an hour-and-a-half each day. She would eat unhealthy food like processed foods and never knew how to change the food she ate.

She now selects the food she eats by macros or macronutrients, a term used to describe the three key food groups we all require for our bodies to function; carbohydrates, fats and proteins, rather than counting by calories, which means she gets to eat what she likes without feeling guilty.

Before she lost the weight, Bailey didn’t have a set routine for her meals and would eat whatever she felt like including processed meals and takeaways. She also used to bake a cake every weekend to eat.

Now she spends her days cooking her meals and includes each food group; 40 percent carbohydrates, 30 percent fats and 30 percent proteins.

“I felt terrible about myself and was just tired all the time. I wanted to keep up with my son. Initially I bought a Beachbody programme called Body Beast, which I could do at home,” she said.

“I felt too embarrassed to go to a gym and figured it was the best way to make time to exercise that worked with our family lifestyle.

“I lost a lot of weight doing that and counting my calories using My Fitness Pal. But it wasn’t until the last few years that I figured out how to work out and eat healthy that I kept the weight off to where I am now.

“As of today, I work out six days a week for about an hour-and-a-half each day. We also stay active with our children.

“As for the food I eat, I don’t diet and don’t believe in dieting; I count macros and really get to eat whatever I want as long as I stay in my balance and calories.

“I feel great now. I have confidence and when I get dressed up, I actually feel worthy, pretty. I value myself and appreciate what I was given. I can wear what I like and not feel insecure.

“People say I look great and ask advice all the time. It’s great to feel accomplished and that people want your advice since you’ve been successful.

“Originally I was dieting and that was the problem; diet doesn’t work. Sustainable eating and working out, doing things you like is the key to making it stick.

“I kept losing and gaining the weight back because I kept trying to ‘diet’ and I was miserable. I also hated working out for a long time because I wasn’t enjoying it, which made it hard to stick to a consistent routine.

“Make small, realistic goals; what do you want to accomplish? When you break down the larger goal into small steps it’s much easier to plan for success.

“I also wouldn’t recommend dieting or forcing the gym; eat mindfully, track it and be active doing things you enjoy. The main thing is to enjoy it.

“I am not working towards my personal training and nutrition certification, so that I can help others gain confidence, lose weight and gain lean muscle.

“Fitness and nutrition is a passion I’ve discovered on my own journey and now I want to use the knowledge I’ve gained through my own experiences to help others feel confident and beautiful in their own skin.”

Meet The Paraplegic Car Enthusiast Who Didn’t Lose His Drive After...