Media Drum World
Home MDWfeatures Once A Sufferer Of Bulimia, This Woman Is In The Best Shape... 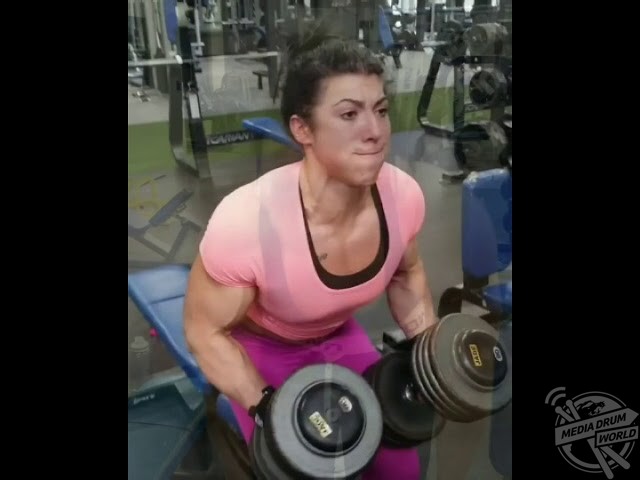 MEET the inspiring woman whose bulimia once led her to sit in front of a mirror with a knife looking for fat to cut off her body but has now turned her life around and become a bodybuilder who can deadlift over DOUBLE her body weight.

Personal trainer and social media analyst, Shannon Seeley (26), from Michigan, USA, was just nine-years-old when she was bullied about her weight which led to her developing bulimia, an eating disorder characterised by binge eating followed by purging.

At the height of her bulimia, Shannon would run for about six to eight miles a day, consume between 8,000 to 10,000 calories within an hour in a day and then throw it all up after.

Shannon would also take 20 to 25 laxatives a day for a course of nine years and starve herself for days which saw her weight plummet to just 7st and a UK size six.

It wasn’t until 2014 that Shannon discovered bodybuilding when she decided to beat her bulimia and has since gone on to win four out of the eight competitions she has entered. With a healthy weight of 11st 6Ibs and UK size 10, she can now deadlift an astonishing 183.7kg.

“I have suffered from bulimia nervosa since the age of nine. I have clinical depression; I have hit rock bottom and I have triumphed after failures,” Shannon said.

“My eating disorder was triggered by kids at school. They always told me I was chubby and eventually I couldn’t even look at myself in the mirror without feeling fat and disgusting, so I began to go to extreme measures to lose the weight and that is how my bulimia came to be.

“I felt trapped in a cycle of food restriction, as well as binging and purging. I was sick all the time, I felt so alone and with the constant throwing up, my serotonin levels dropped dramatically making me feel depressed all the time.

“Before recovery I would run about six to eight miles a day, sometimes reaching all the way up to fifteen miles. I would consume large, excessive amounts of food.

“Then I would throw up, take twenty to twenty-five laxatives and starve myself for days. I literally continued this cycle for years and years and years.

“I was exhausted all the time, extremely moody, and absolutely hated myself. I would sit in the mirror with a knife in my hand looking at what fat I could cut off my body.

“The scale was my best friend; I would weigh myself hourly throughout the day. The numbers on the scale controlled my life. It defined my self-worth.

“Overcoming bulimia was one of the absolute hardest obstacles I ever had to overcome. Unlike those who suffer from drugs or alcohol addiction, with an eating disorder you can never get away from food.

“I was a competitive runner for about ten years. My senior year of high school I was sitting down with my parents discussing colleges.

“I had a few accepted scholarships for my running and I remember breaking down to my parents telling them that if I went away to college I honestly think I would die.

“With the running and eating so poorly, my body was constantly sore, brittle and sick. About three months into my senior year of high school I was playing football in gym class and a classmate landed on my leg and broke it.

“After that I realised that because of my poor nutrition and lack of eating, I was wreaking havoc on my body I vowed to get stronger and began weight lifting.”

She explains the moment she took the plunge and first began competing in bodybuilding shows.

“Soon enough the gym became my release from stress and school and I began to love the weights. My body was getting stronger and with more muscle, my bones began to get stronger as well,” Shannon said.

“Soon people in the gym began to notice my changing physique and when someone suggested I do a bodybuilding show, I jumped at the chance to just try it.

“From there, I fell in love with the sport and process of competing and have been doing it ever since. Bodybuilding has helped me in recovery by giving me something else to focus on besides food.

“Learning the proper way to eat to be healthy was extremely challenging, after hospitalisation, months of therapy and bouts of illnesses associated with my issues, I finally learned that if I wanted to reach my goals of becoming a bodybuilder, I should rely on no one else but myself.

“I paid a trainer to help me stay accountable; knowing that if I didn’t do what the trainer told me to do, I would waste not only his time, but my own as well.

“I forced myself out of the viscous binge and purge cycle which slowly allowed me to see what my body was capable of.

“After a few years I was able to afford an amazing coach, Bill Tocco of WarRoom Nutrition, and he has been my rock ever since.

“He has been by my side through life challenges, numerous breakups and finally the marriage to my husband, Kyle Baxter, and has always pushed me to the potential that he knows I have.

“I have goals that I am trying to achieve and having that focus and knowing that I need to eat and keep food down to fuel my body is essential to get the physique I need for each show.

“I’m human. I have my good days and bad days. There are days where I loathe my appearance and am a bit more negative than I should be about myself, but it passes.

“Overall, I am happy with what I have overcome and what I have built for myself. Being a bodybuilder makes you appreciate what your body and mind are capable of.

“I am like any other human in the world, I am striving to find my place in society while facing harsh criticism from being a female bodybuilder.

“I hope to convey to the world that muscles on a female can be achieved in a very feminine way. You have to want to help yourself in order to recover.

“If you are being forced into therapy without truly knowing anything to recover, you will never be successful. You have to be the change in yourself.”