Media Drum World
Home MDWfeatures This Mother And Cosplayer Is Larger Than Life In More Ways Than... 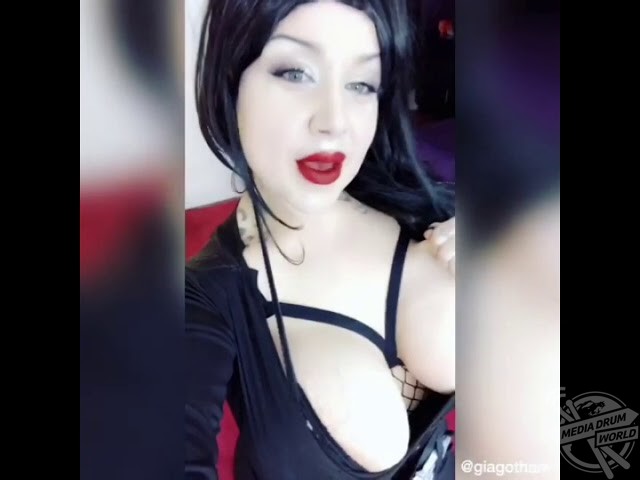 Model and cosplayer, Gia Gotham (31) who now lives in New York, USA, grew up on a farm in the rural Midwest of America and she credits her reclusive upbringing for giving her the creative, off-beat passion for life that she has today. Gia was in awe of her idols former Playboy models, Pamela Anderson and Anna Nicole Smith when she was a teenager and knew that she wanted to have a body and boobs just like them.

At 18, she had her first breast augmentation and most expensive cosmetic surgery to date which cost her around £9,000 and since then she has had a further two enlargements, going from a 34DDD to 34N bra size. As well as this, she’s had lip implants and fillers, Botox, tongue bifurcation where her tongue was split and liposuction on her chin.

During her second pregnancy to her daughter in 2015, Gia weighed 22st 3lb and was told she had fatty liver disease and needed to lose weight to save her life as her kidneys were failing. Despite feeling beautiful in her body, a month after giving birth, she had bypass surgery and now weighs a super slim 12st 10lb and says it’s her best body modification she has gone through.

“Although I also do ‘gender bender’ so it makes people a little awkwardly intrigued when they see Joker’s huge rack is out.

“The best body modification I’ve gone through, by far was my weight loss. I was confident even at 300lbs and still felt beautiful, but I felt trapped.

“I didn’t feel like my body was mine. It felt scary at times. I just didn’t see myself that size. I wore more extreme hair styles and colours, makeup, focused on my boobs, anything really to take away from my body that was like a stranger to me.

“Seeing my idols Pam Anderson, Anna Nicole, and Elvira attracted me to plastic surgery. I remember from a very young age knowing I wanted to have my body and boobs exactly like theirs.

“They were so beautiful and confident. How I feel now compared to before any surgery is more confident for sure. Plastic surgery is just body modification towards how you really see yourself and feel most comfortable. I feel my best when I feel I can see myself how I see ‘me’ in my mind.

“My first surgery was my breast augmentation at 18. I wanted to go as big as possible. My surgeon was so excited to help me out, he had only gone up to 800ccs for an exotic dancer out in Vegas.

“So, putting 960ccs in me who was already quite busty was super fascinating to him. I was very happy after.”

When going about her day to day life, Gia likes to keep herself covered up and wears casual outfits so that she doesn’t attract any negative attention from strangers.

When asked if she any of her cosmetic procedures had caused medical implications, Gia insisted that they haven’t but admitted she needs a strong back to handle her implants. Her future surgery plans involve getting a Brazilian Butt Lift, tummy tuck and more fillers in her breast implants – which she is now fundraising for on Go Fund Me.

“Negativity ensues if it’s allowed, I’ve modified myself because I’ve wanted to and felt like I needed to in order to be who I am. No medical issues, although I will say you need a strong back for implants like these. I would have issues if I didn’t make sure my muscles could handle them,” she said.

“Beauty is subjective. Some people wouldn’t agree with my preferred aesthetic with wanting extreme curves, but that’s what makes everyone so unique and interesting.

“Its’s absolutely always important to be you and aspire to what makes you truly happy.”

The Abandoned Remains Of The Plantation Home That Once Belonged To...