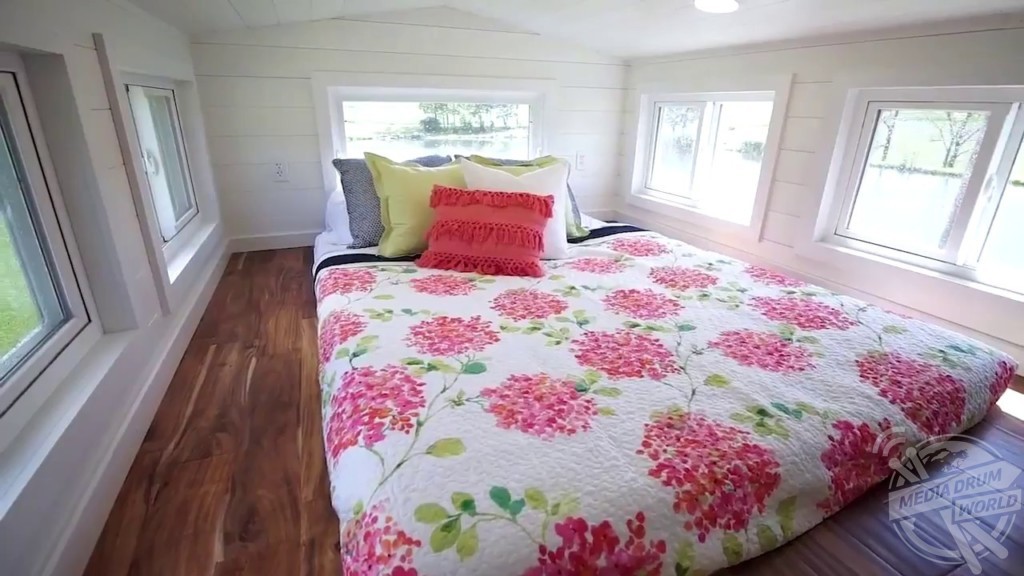 STUNNING pictures and video footage show the inside of this luxurious ‘most liveable tiny house’ which could be coming to a neighbourhood near you available now to customers in the UK for £60K.

The 256-square-foot home looks incredibly spacious despite its size and comes complete with a 32-inch flat screen HD TV, washer/dryer unit and plenty of storage room hidden in the living room flooring and in the stairway.

Other striking shots show the blue-panelled exterior of the 24-foot-long trailer, the sleek bathroom and queen bedroom which sits up a set of stairs above the rest of the property.

The Kokosing tiny house is built by Modern Tiny Living who believes its popularity is down its liveable features.

“It has definitely become one of the most popular tiny homes in the world, especially for its size,” said co-founder Robert Hendricks.

“I use the word “liveable” because there is a tried and true social area (which is also a bed), a full, luxury kitchen, full bath, and plenty of room for a queen or king in the loft.

“For a 24-foot home, it is definitely the most liveable in the world with tons of storage. Now, there are bigger (and much more expensive homes) that are more liveable I suppose, but at this size and price point, I really don’t think it can be beat.”

The Kokosing is available to buy as shown in the pictures and video meaning it would be ready for any buyer to move in right away.

The tiny home is also set up for guest visits with benches which fold out to sleep two people and the living area able to turn into a bed as well.

With the tiny house movement becoming more and more popular Mr Hendricks explained why people are rejecting the conventional house and way of living.

“The tiny house movement is about refocusing on what’s most important in life,” he said.

“We live in this “Keeping up with the Joneses” world where everyone is trying to go bigger, bigger, bigger – more stuff, more money, more technology.  Not that there is something inherently wrong with these things, but we can all agree that very often more is less and less is more.

“It’s connection that fulfils us, not stuff.  We need connection to ourselves, to others, to nature.  The tiny house experience is about reconnecting with that which matters most, and by limiting our “space” it forces us not to distract ourselves with stuff but rather engage with what we have – whether it’s a friend, a loved one, a book, a record, or just watching the world go by.

“There is a reason this movement has roots growing ever deeper, and it is because it is waking up a part of humanity that has been, to some degree, crushed by consumerism, social media, politics, and water cooler gossip.

“The tiny house movement is – at least for thousands of people – a way to unplug and rediscover who we are.”

Modern Tiny Living are based in America but can ship to the UK.

How to Plan a Safe Road Trip

The Ultimate Checklist for Your Toiletry Bag

Anorexia Caused This Woman’s Heart To Stop For Up To Five...