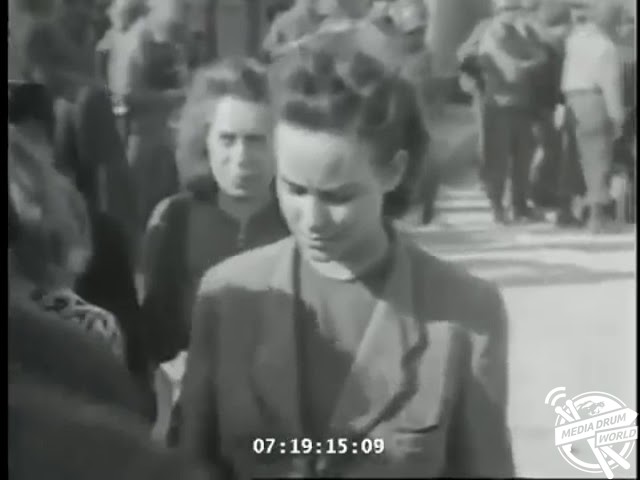 HARROWING FOOTAGE of the moment a group of German civilians were taken around one of the Nazi party’s notorious concentration camps after the end of the war has remerged this week – bringing the question of just how much the ordinary German citizen knew about the horrors of the holocaust back to the fore.

Footage shows a large group of Germans local to the Buchenwald concentration camp in Weimar, Germany being taken around the camp to look at the atrocities committed by the Nazis following the establishment of the camp in 1937.

Emaciated piles of bodies can be seen on the backs of trucks as the local people walk around the camp, many in floods of tears, while the remaining belongings of some of the victims of the camp are laid out on display for them to see. One woman can be seen being carried away by two soldiers after collapsing from the horror of the experience.

Buchenwald was one of the largest concentration camps in all of Nazi Germany, and the very first liberated by American troops as they began their long march across the country.

Set up in 1937, the camp interned Jewish people, gypsies, disabled people, homosexuals and Soviet Prisoners of War. Conservative estimates say the camp was responsible for the deaths of approximately 35,000 people, but this is only based on SS documents, with the final figure expected to have been far higher.

One of the subcamps of Buchenwald, Ohrdruf, was liberated by the US 89th Infantry Division on April 4th 1945, with American troops finally entering the main camp at Buchenwald at 3.15pm on April the 11th. The clock at the camp, which now acts as a museum, is permanently set to 3.15 to this day.

The following day a journalist, Edward R. Murrow, arrived to report on the conditions in Buchenwald for the Americans waiting back home. Speaking as part of a radio report, he said:

“It will not be pleasant listening. If you’re at lunch, or if you have no appetite to hear what Germans have done, I propose you turn off the radio.

“There surged around me an evil-smelling stink, men and boys reached out to touch me. They were in rags and the remnants of uniforms. Death already had marked many of them, but they were smiling with their eyes. I looked out over the mass of men to the green fields beyond, where well-fed Germans were ploughing….

“We went to the hospital. It was full. The doctor told me that 200 had died the day before. I asked the cause of death. He shrugged and said: “tuberculosis, starvation, fatigue and there are many who have no desire to live. It is very difficult.” He pulled back the blanket from a man’s feet to show me how swollen they were. The man was dead. Most of the patients could not move.

“I asked to see the kitchen. It was clean. The German in charge….showed me the daily ration. One piece of brown bread about as thick as your thumb, on top of it a piece of margarine as big as three sticks of chewing gum. That, and a little stew, was what they received every 24 hours. He had a chart on the wall. Very complicated it was. There were little red tabs scattered through it. He said that was to indicate each 10 men who died. He had to account for the rations and he added: “We’re very efficient here.”

Debate has raged ever since the war about how much the average German citizen knew about the horrors of the holocaust. It was widely accepted in the immediate aftermath of the war that most of the population had no idea about what was going on in the camps, and that they would have been horrified if they had. However more recent research has suggested that a lot of the population were indeed aware that camps existed, and knew that Jewish people were being taken to the camps, with Nazi propaganda sending out a relentless anti-Jewish message to its population.