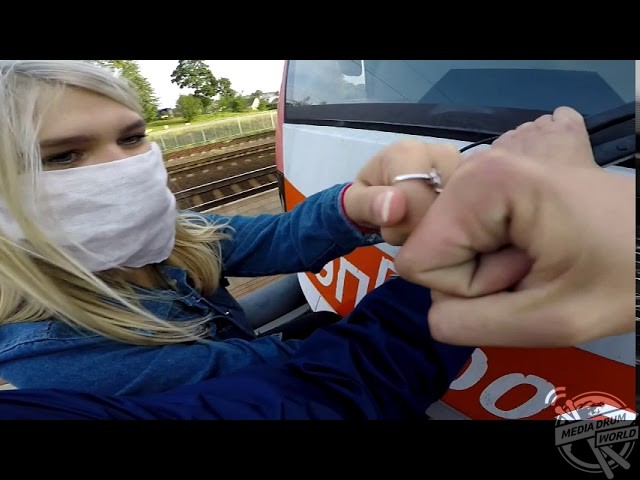 WATCH as one daredevil teenager hangs dangerously from a moving train as it reaches speeds of 75 miles per hour.

Incredible footage shows fearless Alex Nomernoy (19), from Moscow, Russia, hanging on the back of a train and casually turning his music on on his phone.

Another clip shows him fist-bumping a blonde girl who is wearing a white mask across her mouth. The photographer and blogger describes this risky business as his lifestyle.

“I really like to take pictures of the landscapes and architecture of the city from a height, usually from the roof tops,” he said.

“I like to shoot video and mount it. I shoot and take pictures mainly on the camera GoPro and Canon 600d. I chose it because these cameras are the most popular in their environment.

“There was no real threat to life, because we held on to the handrails, we know rules of this type of riding good enough.

“Unfortunately, there are so many boys who do not want to learn the theory and do not know the physics, but just want to be bold and cool. These guys are often injured or even die because of their own foolish technical mistake.”

He says that if people are not happy with the price to ride inside the train, they should follow his example and ride from the outside, as long as they do it wisely.

“People who see us with their own eyes are mostly admired, but there are some people who call us crazy. They just do not understand why we are doing this; some of them call the police,” added Alex.

“I like to ride a train outside only when it is filled with people, or I want to save on a ticket. But this is not the main reason. This is the practical side.

“In addition, for me this is a special philosophy of freedom. I used to feel a huge adrenaline rush, independence from the system, pleasure from the fact that I can break the rules with impunity.

“But when I got some experience in this field, for me it became something ordinary, routine. Over time, the ideological part was gone and only practical remained.”