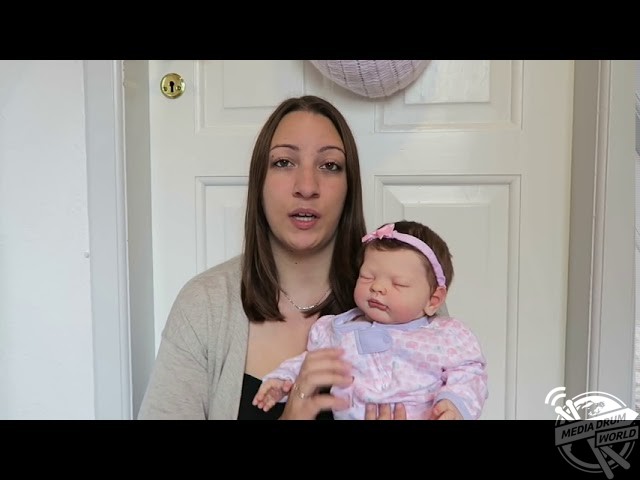 MEET the pregnant mum-to-be with more than 258K YouTube subscribers and 31.7K Instagram followers thanks to her collection of twelve reborn dolls who she treats like real babies for fun.

Sabrina Lindbjerg (21) from Haslev, Denmark, has always dreamed of being a mum and got her first doll just before she turned 14 after looking on the internet for a baby simulator but stumbled across reborns instead and was instantly drawn in by how real they looked.

Sabrina started her YouTube channel, LoveMyRebornBaby, and even taught herself English through the social media platform. On social media, Sabrina roleplays with her dolls and when off camera she enjoys changing their outfits, cuddling them and taking their pictures for her Instagram.

In 2011, Sabrina decided to start making reborns to sell and it was a huge success, selling each doll she makes for anything between £150 to £300. Seven and a half years later, she’s still enthralled by her hobby and has 12 dolls called; Spencer, Aneska, Haylee, Novah, Marley, Leah, Gabby, Ashley, Cayden, Aiden, Ethan, Matthew. Sabrina says she’s lost count of how much money she’s spent on her reborns as she has a nursery and clothes for them but the most expensive doll she’s ever bought cost her approximately £1,600. She explained the process of making the dolls.

“Reborning, is where I paint my doll kits. They come as a blank kit, head, arms and legs, and a cloth body. I then paint it, with special reborn paint, and they go in the oven, every time they have a new layer on,” she said

“I have my very own way of painting my dolls. It takes about five to eight hours for me to paint a doll, which is not long, compared to others. I do also root them, which means, I give them hair. How I do that, is I use a special rooting needle, that puts one to two hairs in at a time, and rooting a doll head, takes about six to nine hours for me, depending on the size of the doll head.

“You can get them with closed or open eyes. I then put them together, and fill up their stuff bodies, and give them a cute outfit on to go home in.

“Reborn dolls, are dolls that look like real babies. They can’t do anything, like cry, eat or poop. They only look real, and feels like a real baby when holding them. You can get silicone babies, that can drink and pee though.

“Silicone babies are a full body silicone doll, that you can bathe and give a pacifier if the doll has an open mouth.

“Reborns and silicone dolls are very expensive, as they are not like a normal doll you buy from a store. They’re all unique and one of a kind, since they’re all hand made.

“Reborn and silicone dolls are not toys and shouldn’t be given to small kids, who don’t know how to take care of them. They are very fragile and should be handled with care.

“Reborn dolls are not for young girls only. It’s pretty much for everyone who knows how to take care of the young girls, young boys, older women or men.

“How I treat my babies, when I make videos for YouTube, I roleplay, meaning I treat them like they’re real babies. I do that for fun, because I love making those kind of videos, and I know that’s what my subscribers like to watch.

“I don’t do the same things off camera, as I do when I film. I do like to change my dolls, cuddle them while I watch a movie, and take cute pictures with them for my Instagram. I still spend a lot of time with them, even though I’m not filming.

“When I began with YouTube, there were about four other reborn channels as reborns weren’t as popular as they are now. But now there are thousands of reborn accounts on YouTube, some more popular than others of course. But reborn dolls have gotten so popular worldwide and I just think it’s amazing, that more and more people are getting into the hobby too.”

Sabrina says she receives lots of hateful comments on YouTube but she focusses on the positive ones. She says that no one will change who she is and that she isn’t ‘not normal’ because she collects the dolls, she just has a different hobby, something she used to be embarrassed about telling new people.

Sabrina and her partner Robin are 23-weeks pregnant with her son who is due in May and she has started another YouTube channel charting her pregnancy and journey to motherhood called, Sabrina and Baby.

“On YouTube, I get hate daily. I just block the people and delete the comments, because I get hundreds of positive, amazing and sweet comments too everyday, and they are the ones that mean the most to me, so the few people that hate on me, I couldn’t care less,” she said.

“This is something I do, because I love it, and it makes me happy. People can have their opinion, but no matter what they say, I would never change the way I am. I do understand, that some people think it’s a bit weird, if they’ve never heard about it before, but it’s just a hobby like any other hobbies.

“I’m not not normal because I collect reborn dolls, it’s just a different hobby. It makes me happy, and I know that I make my subscribers happy, and that’s all that matters to me.

“At first, I was a bit embarrassed to tell people, but I told myself, that there’s nothing to be embarrassed about. This is my hobby and my job, it’s different, and I shouldn’t be embarrassed of who I am. It’s makes me happy.

“My message to convey would just be, don’t be ashamed or embarrassed if you like reborns or just normal dolls. If you’re thinking about getting one, just go for it. They are amazing and so cute.”