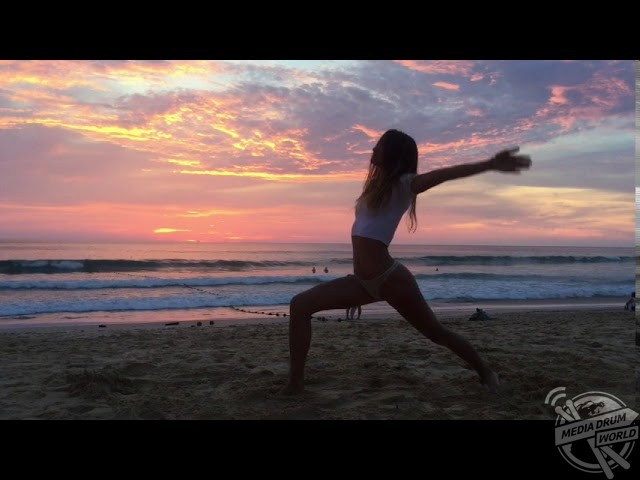 EXOTIC images show the super-sexy former nightclub dancer who packed up her belongings and steady life to travel the world one yoga pose at a time.

The envy-inducing shots of Ekaterina Terenina (24), from Irkutsk, Russia, show her posing in contorted positions in Spain’s most beautiful cities; on the beach in Barcelona, in front of a harbour in Almeria and underneath a majestic archway in Granada.

Other photographs show more yoga poses against the backdrop of Montenegro, Balkans, and in the traditional lotus position in front of a quaint Nepalese temple.

A video reveals the breath-taking scenes of Ekaterina living the exotic yogi life in front of a palm tree and bikini-clad on a beach with a beautiful sunset background.

The yoga instructor used to struggle with low mood, lethargy, and body confidence issues which affected her social life.

“I remember at the time it was the start of winter, it was very cold, I was completely uninterested in everything, tired from work and had no personal life, I had low self-esteem and physical lethargy,” Ekaterina said.

“At some point, I got tired of the nightlife; the last half of the year I fell into a kind of depressed state and that was the moment when I decided something needs to change.

“I wanted to change it for a long time but I didn’t have the courage to leave the club since it earned me a steady salary.

“I wanted to move to the USA; that was always my dream but I didn’t get a visa; so, I completely changed my route and went to Thailand. I have no regrets.

“My mood became instantly better and when I went travelling I began to sleep well at night, was always warm, swam in the sea, met so many people and my mood began to rise.

“I became more confident, freer. But I appreciate every period of my life; even the worst periods takes us somewhere.

“The only thing about this way of life is that I don’t have a steady living with a house and a permanent life; I’m always living out of a suitcase and can’t be in one place for long.

“My yoga journey is just a daily practise and I’m studying the theory in asanas, philosophy, sutras etc and when I visit a beautiful place I take pictures and post it online.

“Yoga has taught me how to listen to my heart and following the right path, that’s why in winter 2015, I left my job and moved to Phuket, Thailand, without any plan or direction.

“That’s when I decided to learn more about yoga and then went to Nepal.”

Since then she has travelled to seven countries in one year, including; Thailand, Spain and Italy, documenting her yoga poses on social media.

In Nepal, Ekaterina joined a yoga teaching 200-hour class, where she developed her knowledge in yoga and had the opportunity to teach others.

“I chose Nepal for teaching because it was a completely new and unusual country for me. It was a great way to get out of my comfort zone, because the course was completely on English language which I wasn’t very fluent on,” she said.

“It was a difficult and the best experience I have ever had. We had a little exam at the end of the course.

“We could give our own yoga class for others and I did it well, understanding that ‘I can do it’ and decided one day that I would teach yoga to other people for a living.”

The Nepalese experience then reinforced her dream of becoming someone who is proficient in the study and practise of yoga, or a ‘yogi’.

“For me, yogi is a person who listens to their heart, trusts in the universe and of’ course applies yoga into their daily lives,” Ekaterina said.

“My advice is that you don’t need to be afraid to go where you want to go and want to be. Try to do what you want to do. The world is open to any person if the person is open to the world.”

The Vital Role of Digitalization in Supply Chain Management and Logistics

Virtual Insanity: A Virtually Real Dragon Ride Is Off the Dork...