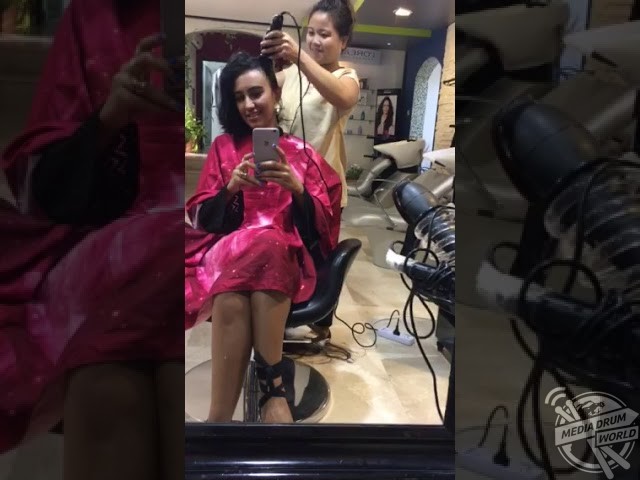 MEET the brave and defiant woman who suffered through several cancer treatments, including chemotherapy, to beat two cancer diagnoses in less than a year.

Flight attendant Doaa Abouelseoud, (31), from Cairo, Egypt, was diagnosed with both breast cancer and Hodgkin Lymphoma within the space of a week in June 2016.

Doaa admits she struggled to cope with her diagnosis, becoming depressed and holding little hope that she would overcome the illnesses. She lost 1st 12Ibs over the space of three months, felt severely dehydrated and stopped having a social life.

But through a combination of treatments including chemotherapy, radiation and various others she was told by doctors after three months of suffering that she had beaten both cancers.

“I went to the doctors for a random check-up, when I found out that I had a mass (a small one) and the doctor said I shouldn’t be worried as many girls have this especially in their thirties,” Doaa said.

“I had to do surgery to remove it; I was very concerned, especially since I have a family history of cancer. Once the surgery was over I thought that was it and I will be able to work and continue with my normal routine.

“It was very difficult living with my stitches on my left breast with so many restrictions, as I never really get ill and it’s rare for me to even get the flu.

“Ten days later, the oncologist called me in and told me it’s not just a mass, it was a third stage breast cancer and that I would need another surgery.

“The stitches didn’t heal yet and it had to be opened again. Within just a week I had to undergo another surgery, then after the second time I had bad news again; they found another cancer; lymphoma (Hodgkin).

“So, I got diagnosed in ten days with two different types of cancer. And all of this a year before I lost my mother to pancreatic cancer.

“Going through chemotherapy was the worst and best thing that happened to me; it was painful, it was aggressive, I lost my appetite for food, which made me lose 12kgs, my skin became dehydrated, my social life also was effected,” Doaa said.

“The best part about it was that I appreciated things that I took for granted, such as tasting the flavours of food; I lost that sense during the treatment.

“I couldn’t think of anything after I got diagnosed as I was in shock. I had many questions in my head, I got depressed for two weeks until I realised that I shouldn’t be sad or depressed.

“I am still alive, and every day is another chance; also, science and technology had improved a lot and my oncologist and chemotherapy doctors were very reassuring.

“I found out that I was so lucky to have been diagnosed and have had the surgeries done, since some other people can’t afford it or they don’t even know that they have cancer.

According to the NHS, breast cancer is the most common type of cancer in the UK; with most of the women who are diagnosed being over 50 years old.

Around one in eight women are diagnosed with breast cancer throughout their life. The cancer can be detected by a number of symptoms, with the most noticeable being a lump in the breast area. While most lumps are benign, it’s always important to have them checked with the doctor.

Other symptoms include; a change in the size or shape of one or both breasts, discharge from either nipples, a lump or swelling in either of your armpits, dimpling on the skin of your breasts, a rash on or around your nipple or a change in the look of your nipple.

Hodgkin lymphoma is a rare type of cancer that develops in the lymphatic system, which is a group of vessels and glands located around the body.

It mostly affects young adults in their early 20s and older adults over the age of 70; slightly more men than women are affected.
“My best friend Fatima has been the biggest supporter during the worst times and she was always there; she’d have done anything to stay next to me and never made me feel that I was ill or tired or too heavy.

“The process has changed everything; from my appearance to my diet, I don’t think that I have complained about life and I have become more positive and optimistic; I’ve lost all of my fears.

“During the recovery process I had to stop drinking and smoking, then I started a new diet with lots of fresh fruits and vegetables.
“I also started to exercise more and go for a walk by the beach, but most of all I removed all the negativity from my mind and my heart which helped me a lot to recover. I also stayed away from negative people.

“I feel so free and I feel like myself more than ever; it’s like I’m unleashed from all my fears and I’m just happy to be here now and enjoying life.

“The hardest part was to survive and carry on. My advice would be to enjoy today because this is all what we have.”

Old US Army Video Showing What Could Be the First Manned...