Media Drum World
Home Past Colourised Images Show The 1917 White Sox World Series Side Prior to... 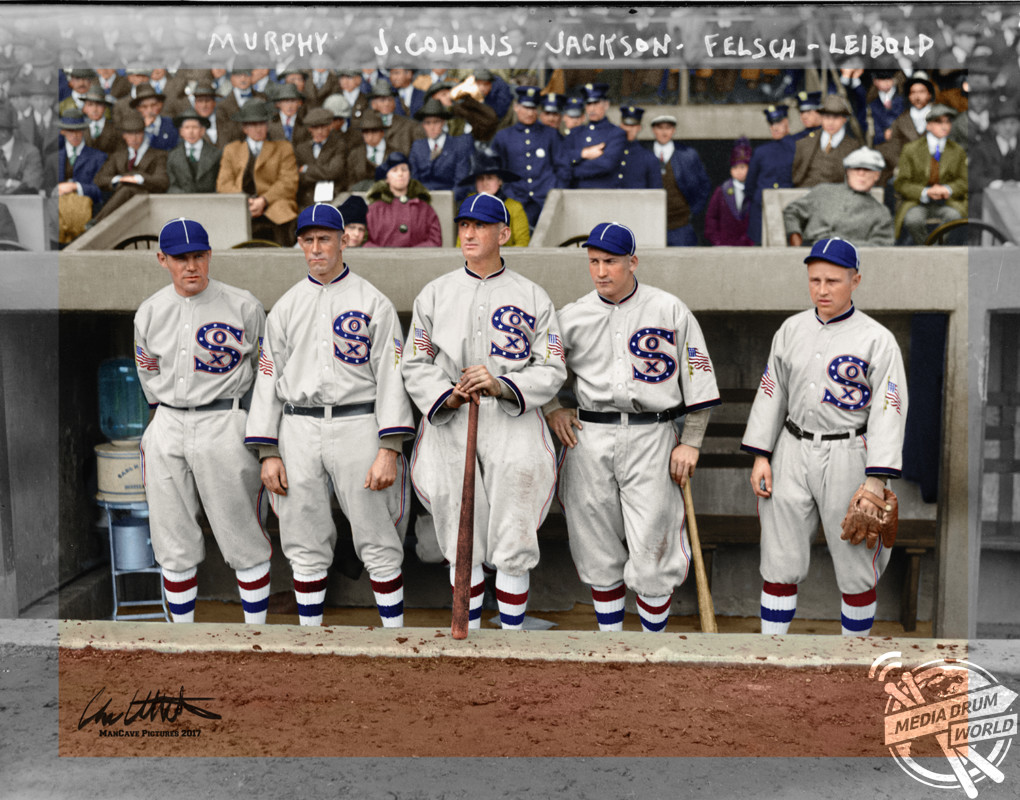 THE 1917 Chicago White Sox World Series Championship team, several of whom were later implicated in a game-throwing scandal, has been brought into the twenty-first century after being expertly colourised.

Vivid colour pictures show the team in action wearing their usual jersey and also wearing special red, white and blue uniforms to celebrate America’s entry into World War One in 1917.

The incredible images include Shoeless Joe Jackson who was the star outfielder and one of the best hitters in the game, third baseman George ‘Buck’ Weaver and pitcher Eddie Cicotte.

Those men were three of eight players banned for life from baseball in 1921 by newly appointed baseball commissioner Judge Kenesaw Mountain Landis.

The players were accused of intentionally losing the 1919 World Series against the Cincinnati Reds in exchange for money from gamblers.

Landis placed them on the ‘ineligible list’ despite the players being acquitted at their public trial and their ban included banishment from post-career honours such as consideration for the Baseball Hall of Fame.

Despite requests for reinstatement in the decades that followed (particularly in the case of Shoeless Joe Jackson), the ban remains in force as of 2017.

The striking snaps were painstakingly restored and colourised by Chris Whitehouse (57) of ManCave Pictures.

“In the original images, I see people who should look normal, but instead look like dusty old ghosts,” he said.

“I am especially offended to see their colourful uniforms recorded only in shades of grey. But what I hope you see in my finished images is what you would expect to see if you had exited your TARDIS in the middle of a baseball game in 1917. I strive for the highest realism possible.

“The American Library of Congress has an immense treasure trove of antique baseball photos in very high resolution that are available for download. There is just no way I could leave this treasure untouched.”

‘Shoeless’ Joe Jackson confessed in sworn grand jury testimony to having accepted $5,000 cash from the gamblers. He later recanted his confession and protested his innocence to no effect until his death in 1951. The extent of Jackson’s collaboration with the scheme is hotly controversial.

Chris, who used Photoshop and a Wacom tablet and pen to colourise the pictures, explained how he brought the photographs to life.

“When I actually try to describe the details of the method it becomes a bit overwhelming,” he added.

“But basically, it involves the restored greyscale base image on top of which I paint dozens upon dozens of layers of colours which allow the light and dark shades to show through.

“Those colours are in turn controlled by various types of filters that affect their appearance in different ways.

“I should also mention the research that goes into getting the colours correct. I can’t claim to be always correct, but I do as well as I can.

“A normal person might have the problem of the patience required to do this work. But I’ve never been accused of being normal.”

The 1917 Chicago White Sox dominated the American League with a record of 100–54. The 100 wins is a club record that still stands.

Facing the New York Giants in the 1917 World Series, the team clinched the series in six games, thanks in large part to the workhorse efforts of Eddie Cicotte and Red Faber. It would be the team’s last world championship until 2005.

Tips for the Learner Motorcycle Rider in the UK