STUNNING pictures have revealed the primitive equipment pioneering Allied sharpshooters were forced to work with when they ushered in the sniper-era of World War One.

The incredible images show one dedicated sniper holding his rifle and modelling early camouflaged headgear to allow him to blend into his grassy surroundings.

Other shots show a grassy knoll where it is almost impossible to spot the hidden sniper, units training to hone their sharpshooting skills and soldiers making use of sniper plates to protect themselves as they peek out of a trench.

The spectacular photographs are showcased in a new book, Sniping in the Great War, by Martin Pegler and published by Pen and Sword. He revealed that in WW1, three was the tragic number.

“Sniping was responsible for the belief that it was bad luck to light three cigarettes from the same match,” he said.

“This was based on fact, as the flare of a lighted match can be seen from over a mile and a half away.

“On average, it took a good sniper about the same length of time to draw a sight on the target and steady his aim, as it took to light two cigarettes. Thus the third man would be a potential target.

“It was not until the end of WW1 that most Allied powers began to appreciate how important a sniper could be on the battlefield. They were vital for gathering information, and could act as forward observers for artillery units or even aircraft.”

The book details how sniping came of age during World War One, having been an unrecognised military skill since the Napoleonic Wars. Modern British sniper training is still based on the curriculum that was devised during the Great War, according to Mr Pegler.

“During 1914 only Germany fielded snipers and few allied armies understood the level of threat this posed or had the means in terms of weapons or trained men to deal with it,” he said.

“Britain and her allies had no training programmes, no skilled sniper instructors and no dedicated rifles equipped with optical sights. These things took time to organise and it wasn’t until mid-1915 Britain began to be able to respond but by late 1917 the Allies were the dominant sniping force.

“Following the lead of the Germans, eventually all the combatant sides learned that the use of snipers was not simply to kill unwary enemy soldiers, but was multi-faceted.

“Sniping was invaluable in destroying enemy morale, slowing down attacks, depriving them of officers and junior leaders, neutralising other snipers, eliminating enemy machine-guns and strongpoints and providing advanced observation and intelligence. 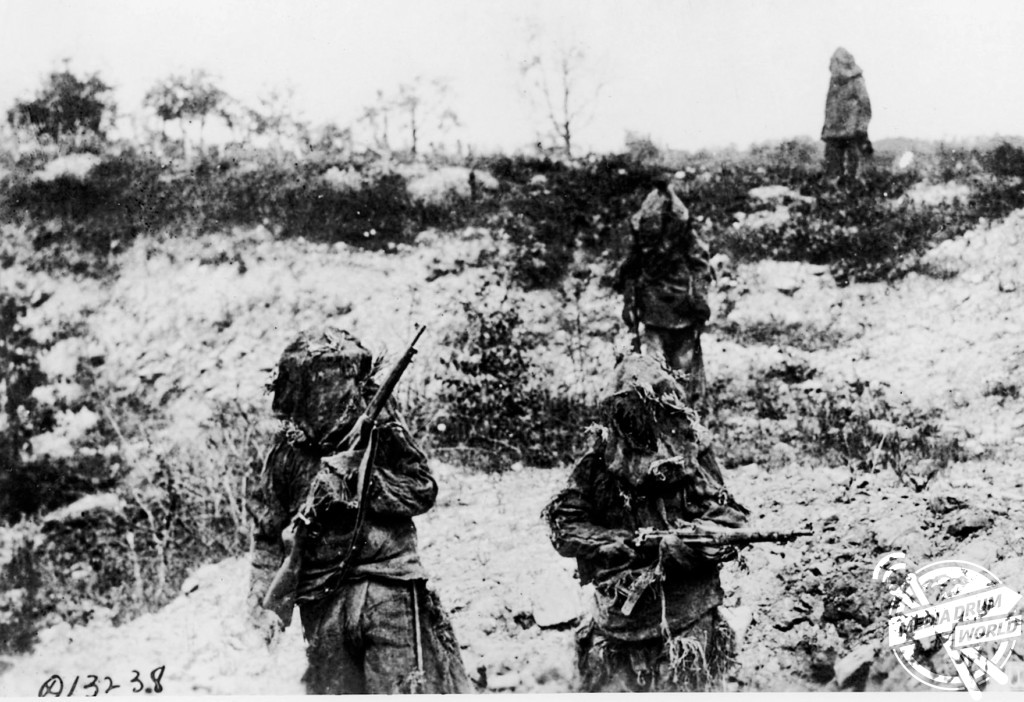 US Army snipers in full Ghillie suits advance across typical chalk Somme terrain. Their Springfield M1903 rifles are wrapped in Hessian and camouflage painted, but the scopes have been dismounted, probably to prevent damage while training. Martin Pegler/mediadrumworld.com

“These lessons were hard-learned and had been more-or-less forgotten by the time war began again in 1939. Ex-snipers from 1914-18 had to be found and re-employed by the army to pass on their skills.”

Despite the primitive rifles employed, some even without optic sights, there are many great tales of supreme sharpshooting by Allied snipers.

“Some of the best snipers were in the Commonwealth forces, native Indian Canadians and Americans provided many of the highest scoring snipers,” said Mr Pegler.

“Canadian Francis Pegahmaghbow an Ojibwa, won the Military Medal and two bars, and was credited with 358 Germans. After the war, he became Supreme Chief of the Native Independent Government.

“Australian Billy Sing, who was part Chinese, accounted for as many as 200 Turkish soldiers on Gallipoli. Lacking rifles with telescopic sights, Sing would use a spotter to tell him when a target was in sight, pop up and make a snapshot, seldom missing. He could hit a man’s head at 400 yards.

“So frustrated were the Turks that they employed their own sniper to kill Sing. His bullet smashed the binoculars Sing’s observer was looking through and creased Sing’s shoulder, but did not seriously hurt him.”

How to Choose the Best Back Support Lumbar Pillow

Beautiful Compact Homes Are Available For Free With This New Programme